Will our new case numbers continue to increase?  How long will it take us to reach a quarter million cases a day?  I’m not sure.  Possibly there might be a faltering in growth at present, and after Friday’s new record, Saturday was “only” 137,000 new cases.  Perhaps some of the new restrictions being imposed are starting to work.  But on the other hand, I agree with the experts who fear that Thanksgiving travel and family celebrations might create an uptick in new cases.  Let’s see how the country acts for Thanksgiving and maybe then it will be clearer if we’ll go on to a quarter million cases every day or not.

The UK is planning a bit further ahead than the US.  It is trying to come up with a lockdown policy for the Christmas period, and at present, the thinking is there will probably be a five day suspension of restrictions to allow families to get together over the Christmas period.

One could wryly note that the UK government’s Christmas gift to its people is the gift of the virus – a bonus chance to become infected.  While it is kind to allow families to come together and unite, the virus is relentless in its spread. The UK has calculated (I don’t understand how) that it will require five days of stricter lockdown restrictions for each day of the Christmas “amnesty”, so 25 days of greater lockdown in return for five days of relative freedom.

What the UK government is not saying, however, is how many extra cases and deaths will result from this five day suspension.  That’s essential information to share, to allow people to make truly informed decisions about what to do at Christmastime.

I have realized that because there are such large gaps in counts between each of the states, these lists of US states will probably be very slow changing rather than volatile.  It would be great to get a list of current new infections and deaths rather than totals since the start, but I’m not sure of a source for that – if anyone knows of one, please let me know.

The two new case tables and the death table too show European countries continuing their advance up the lists.  Italy, nowhere on the death list last Sunday, is now in fourth place.  And, as predicted, the US edged ahead of Chile to return to its customary 8th place.

An interesting list was shared earlier in the week showing who will probably be offered vaccinations first.  Unsurprisingly, the highest priority was given to front-line health workers, EMTs, cleaners (?) and first responders.  This is followed by three more categories of successively lower priority people.

The amusing thing, to me, was to note how much of the US population fell into one of these four priority groups.  Can you guess?  Indeed, can you guess

(a)  How many people in the ultra-highest priority group?

(b)  How many people in total in all four priority groups?

The answer to this two part question reminds me of our new approach to schooling and sports.  Everyone’s a winner, no-one’s a loser.  As you can see in the linked article, in the case of priority access to the vaccine, somewhere between 85% and 95% of the population falls within the top four priority groups.

Talking about the vaccine, and with Pfizer now having submitted, on Friday, an emergency use authorization for their vaccine, the latest survey shows the concept of being vaccinated is starting to become more popular again. 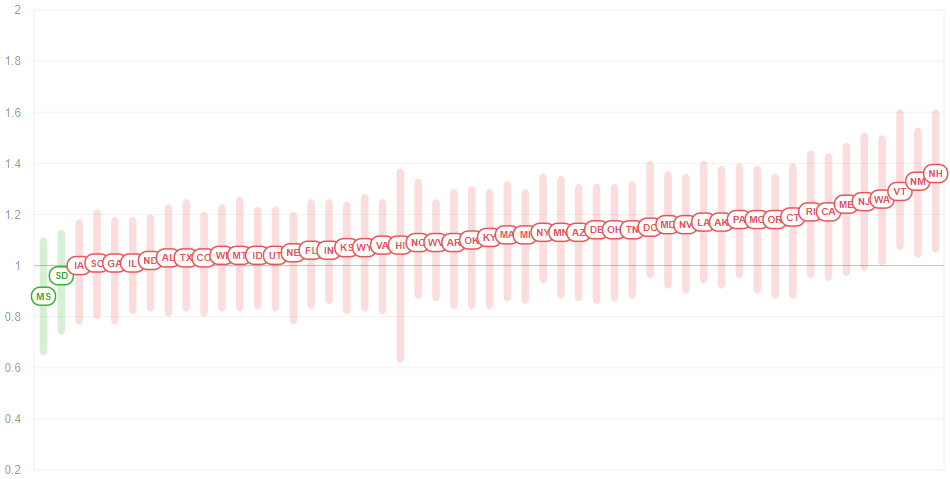 After a week of only one state having a diminishing rate of new virus cases, on Sunday that one state (MS) was joined by South Dakota.  Not long ago, SD was at the forefront and one of the states with the most rapidly rising numbers of cases, so if they can move from the far right of the chart to the far left, why can’t other states do the same thing, too?

We almost laughed to see this article, pointing out that Japan is suffering its own new rising wave of virus cases.  But their new record count is 2,508 new cases in a day.  That’s not quite as terrifying as 204,000 new cases in the US.  Sure, Japan has fewer people (126 million instead of 332 million) but even when expressed in new cases per million, Japan’s daily rate of 19.9 is 31 times lower than our daily rate of 614.

That really shows the respective severity of the virus on our two societies, doesn’t it.  Japan’s worst new case day is 31 times better than our worst new case day.  What would we give to see our rate dwindle 31-fold…..

We’ve not had that low a rate since 21 March.

When politicians are begging for votes, they love to pretend the electorate is full of high minded, noble people who can be trusted to instinctively do the right thing, and refer to “the American people” (or whatever applicable nation) as an extraordinary collective of saints.

We’ve seen just how much people can be instinctively trusted to do the right thing during this pandemic, haven’t we.  In the US, perhaps the most extreme example was the Sturgis motorbike rally, representing a failure not just by the half million or so people who attended, but by government regulators at every level – city/county/state/federal – to do the right thing.

Here is a fascinating example now of people doing the wrong thing in England.  This article explains.

As a partial result, Britain is now planning extended lockdown measures all the way until Easter next year (4 April 2021).

This is an interesting article in the Wall St Journal, predicting that many of the changes we’ve made to our lifestyles will end up being permanent.  It includes the interesting suggestion that we’ve squashed ten years of social evolution into perhaps as many weeks as a result of the virus crisis.

Price gouging is one of those emotional topics where sense is quickly a casualty in any attempts to look at the underlying realities.  In this case, it seems the truth too has been abandoned in a rush by rising political star Letitia James, the NY Attorney General, who boasted this week of fining three Amazon sellers for selling what she claims was unfairly over-priced hand sanitizer, and depriving people of access to it.

But her claims – surprise, surprise – contain some logical contradictions within them.  She says that the price gouging was “at prices that grossly exceeded the price at which the same or similar products were readily obtainable”, but also says that these sellers were depriving people of access to hand sanitizer.

Alternatively, if it wasn’t readily available elsewhere (more likely to be the case, her claim to the contrary notwithstanding), then how can one set a fair market price for a high demand item?  Do we know what additional costs the sellers might have incurred, such as urgently importing the product from other countries, or traveling around the US buying up whatever they could find, wherever they could find it?

Price controls never sit comfortably in a free market economy.  Tthe NY AG should at least get her story straight before she rushes to impose fines and boast about it in the press.

Here is a totally foreseeable situation.  At present, 1,000 hospitals in the US are “critically” short of staff, and this number is expected to rapidly increase.

Seriously, for the last eight months, we’ve abundantly shown that most people lack the sense to control themselves, and now everyone is paying the consequences.  Those 1,000 hospitals aren’t just short of Covid-care staff, they’re short of all staff.  That means people who have heart attacks, or discover cancer, or fall and break a bone, or whatever else, will suffer the consequences of the non-mask wearers, every bit as much as the non-mask wearers themselves.

Some good news for us all – if we can manage to survive the virus crisis, there’s been an interesting breakthrough in anti-aging treatments.

I learn something every time I read of someone and their virus experience.  While the virus experience varies so much from person to person and we shouldn’t over-generalize, nonetheless, I find every such account fascinating.  Here’s the latest one, under a great headline – “I Live in the Middle of Nowhere. I Still Got COVID“.