If you’re reading this, particularly if you’re reading it on Sunday 15 or Monday 16 November, you’re one of my more dedicated readers.  Thank you!  I say that because I don’t distribute the Sunday Covid Diary entry to everyone, just to the people who ask for the immediate or daily versions of my newsletters.

It is lovely to have you following along with me on this ugly and unfortunate topic, of course.  I feel that “a trouble shared is a trouble (almost) solved” and having someone – you – to talk about all these issues with has definitely helped me on my own voyage of learning through the last nine months (my goodness, has it already been that long!).  Plus, I’ve made new friends, and benefitted from public and private comments and pointers to various relevant articles and discoveries – while I’m the person who sends this all out to you, many times my material has benefitted from your help as part of its preparation and research.  Thank you, a second time!

I’d like to be able to thank you a third time, too.  I’m back to focusing on my essential annual fundraising drive, and mentioned it in Friday’s newsletter.  Regrettably, it would be an exaggeration similar to the many virus-related exaggerations if I were to tell you now that my Friday ask was greeted with a great outpouring of support.

If you’ve been reading my material for over a year or two, you’ll have seen each year’s annual fundraising drive, usually earlier in the fall than this.  As you may already know, writing the newsletter is a full-time job for me.  I earn some income from advertising on the website, some from referral links on recommended products, and some from the tours I offer several times each year.  This year, travel related advertising has almost zeroed out, and I cancelled all four of my tours, way back in February.  Unfortunately, none of my costs have reduced, and I’ve not got a penny of support from any of the government schemes – my type of self-employment seemed to slip through the cracks of all the special support schemes earlier this year.  So there’s been precious little income at all, which makes the other part of my “business plan” all the more vital this year – voluntary reader contributions from people like, ahem, you.

If the Covid diary newsletters are useful and helpful to you, to say nothing of the regular “normal” content on Fridays too, can I ask you now to consider a gesture of support from you in turn.  You’ll get some extra content in some of my articles as a supporter, and you’ll get access to my now completed 400+ page eBook “The Covid Survival Guide“.  And hopefully, you’ll get an even more positive warm feeling and sense of being part of something good every time you get each future newsletter, too.

It is easy and quick to become a Travel Insider Supporter.  You’re completely free to choose whatever level of support you feel most appropriate and also comfortable/convenient for you – either as a one off act, or you can set up for regular quarterly or annual support.

Your help really is needed, more this year than ever before.  Thank you for considering and hopefully choosing to help out.

Now, back to the virus.  There are times when the virus seems implacable and unbeatable.  There are other times when it seems like in reality it is a very simple thing, and it is inexplicable how we can be messing up so badly at such a simple task.  Times like, for example, this appalling story of deadly incompetence at a nursing home in GA.

The real problem?  Insufficient accountability.  I’d like to see at the very least, manslaughter charges being brought against the managers of this place.  But what are the chances of that happening, do you think?

There’s an unavoidable consequence of the skyrocketing infection rates in the US at present.  Increasing shortages of healthcare resources, with some states getting close to capacity in their hospitals, particularly the ICU facilities.  I’d encourage you to plan ahead for managing your own illness on your own, at home, and to lay in supplies of anything you might need now, before you need them.  Parts Three and Four of my book go into these issues in extensive detail.

I say this after seeing items like this and this appearing all over.  Sure, there might be a vaccine coming out some time in the early part of next year, but who knows when you and I will get to see it, and meantime, every day is more risky than the day before due to the increasing number of cases (and therefore infectious people) out there, and a healthcare system rapidly reaching its limits.

A few people asked to see the US data on a regular updated basis, so I’ll try it for a while and we can see if it is helpful or not.

On the death list, Argentina and the UK both moved up three places.  Bolivia dropped six places.

On the US rankings, it is astonishing to see that in both cases and deaths, the difference between the best and worst states is almost a factor of 20.

It is interesting to see how brief Belgium’s recent Covid crisis has been.

Depending on where you start to time Belgium’s “second wave”, you can probably say it took about a month to turn the corner and start drastically reducing daily new cases.  This is not unusually fast, other countries seem to have very brief flare-ups too.  But compare this brief flare-up to the US.  We never conquered the first wave, we never conquered the second wave, and the third wave has been steadily climbing for six weeks or more.

The sometimes-cited reason for this is that the US is not just one nation, but should be considered as a collection of 50 smaller nations, so first one state peaks then falls, then the next does, then the next, and so on.

On the face of it, that makes intuitive sense.  But if that was the case, there’d not be a soaring sharp rise to an enormous peak, but rather a fairly stable flat line of new cases – as one state goes up, another goes down, balancing each other out.

We should be well past the point of making invalid excuses to explain our problem.  How about some positive action.

Meanwhile, noting the rapidly increasing rate of new cases every day, and having reached a new record of 187,907 a couple of days ago – it being barely ten days since we first reached 100,000 in a day, I have to wonder – how soon before we start having days with 200,000 new cases?  Might it go even higher still?  My answers to those two questions would be – we’ll break through the 200k barrier before Thursday’s diary entry, and yes, we’ll go higher and higher beyond that.

Lots of countries are rushing to sign deals with Pfizer for their vaccine, assuming the Phase Three trial completes successfully.  So we wryly note two aspects of this story – the first being those terrible little words that hide so many disappointments within them – “up to”.

It seems Pfizer has already overcontracted its production capacity for the immediate future for the vaccine, so our guess is that the “up to” will be some number less than the hoped for 300 million doses (enough for 150 million people) – and/or, we note there is no reference to delivery times in the article, so who only knows when they might be received.

The second point to note is the interesting observation that “Member nations in Europe can donate the vaccine to lower and middle-income countries…..”.  Why would any country not give highest priority to its own citizens?  How would you feel if you or a family member were denied the vaccine and subsequently died because your vaccine was given away to someone in some other country, instead, by an altruistic national agency that valued the lives of foreigners higher than the lives of its own country’s citizens?  By all mean, of course, let any country buy more doses than it needs for its own people, and distribute those elsewhere as it sees fit, just so long as it looks after its own people first.

This will increasingly become a delicate issue.  WHO are trying to take over the vaccine distribution process, and you can be sure their priorities will not be the same as yours and mine.

Heads or tails?  Best of three?  Of four?  Elon Musk has been tested four times in a row for the virus.  Two tests showed positive, and two showed negative.  You know that he has access not only to as many tests as he likes, but the highest quality tests, too.  So does he have the virus or not?  It is impossible to tell, based on the test results.

The entire testing process is beset with many more problems and errors than anyone seems willing to acknowledge, which makes the whole counting of cases a very fraught and subjective topic.  The tests are inaccurate, and then there’s the further imprecision of people who get the virus without any symptoms, making it even harder to guess at real numbers.

It is really helpful to know how many people are getting the disease each day, because that is an advance indicator of what stresses there will be on hospitals and ICU facilities in a week or two’s time, and a pointer to a subsequent death count too.  But our counting methodology is terribly inaccurate, which suggests the only true measure is the death count – and even that is full of problems too.  Are we undercounting or overcounting deaths?  For every person who believes we’re undercounting, there’s another equally well credentialed expert who believes the opposite. 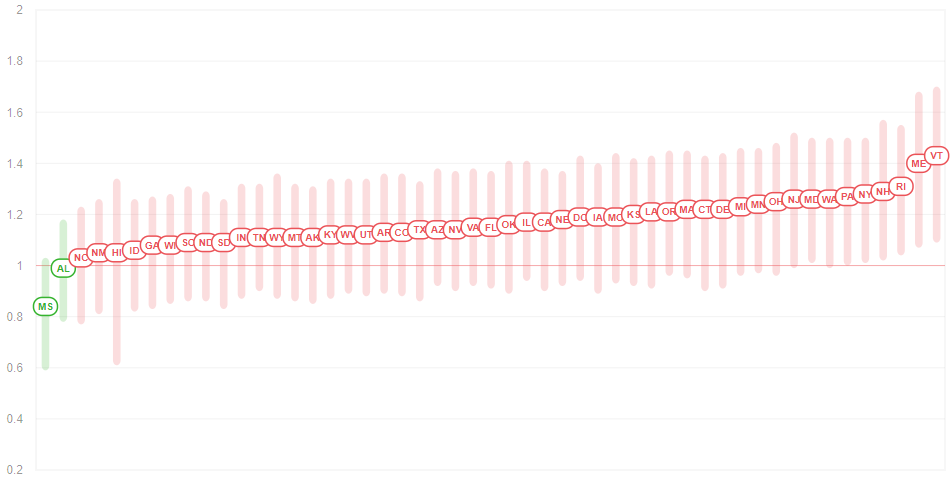 The US as a whole passed through a quarter million deaths, at least as per the official count, on Saturday morning.

Mainly closings at present.  OR and NM are both imposing new restrictions, as are many other states (MI and WA mentioned here), indeed, it is very difficult to try and know exactly what is allowed, not allowed (and what the penalties are in such cases), or “suggested to avoid” (whatever that means), in any state or county or city.

Do you know the situation in your town/city, county, and state?  Do you know the rules on mask wearing indoors and out?  On the size groups you can be part of?  On how much a restaurant or bar can re-open, and if they have limited hours?  I can’t keep track of my own local area, and I doubt many others can, either.

How can we expect compliance when we can’t clearly and consistently explain to people what they must do?

Talking about the laws on mask wearing, North Dakota has finally required mask wearing.  I guess that goes in the “Better late than never” category.  But strangely, SD still does not require masks.

And, while virus prevalence is at record breaking highs and states are reimposing various restrictions, the airlines are deciding it is time to start loading up their planes to maximum capacity again.

JetBlue at least has the decency to let people cancel their booking if they don’t want to fly shoulder to shoulder with other passengers, in planes with middle seats sold as well as window and aisle seats.  The situation is fluid, and different airlines are changing their policies at different times, so research carefully before you fly anywhere.