I hope you are having – or should I now say “did have” a lovely Thanksgiving, however you arranged it.

I had to smile on Friday – my daughter and I were out walking our dog with one of her girlfriends, her friend’s mother, and their dog too.  The mother was asking me for my advice, tearfully – she thought her elderly parents no longer liked her.  They didn’t want to come for Thanksgiving, and when she prevailed upon them to come, they only stayed Thursday night and left early Friday morning.

I tried to explain to her that her parents, in their 80s, probably were quite anxious about being in a home with six people – a physician who works in a high risk hospital, two children who are still physically attending school every day, two older children, and their daughter – because of the virus prevalence.  Astonishingly, this had not occurred to the woman, even though she has a doctorate in microbiology.

It seems that “Covid blindness” cuts across all demographics.  So if you too were troubled by having fewer people at your Thanksgiving festivities, that is probably why.

I would urge you to consider my book, especially if you already have access to it as a supporter.  Even though there are now vaccines “just around the corner” (ie maybe in the first quarter, probably in the second, and definitely in the third quarter of next year) we’re moving into very tough territory at present – this article says daily deaths are expected to double in the near future.   My book includes 91 pages on how to avoid getting infected, plus 110 pages on what to do if you are infected, to minimize your risk of the infection becoming severe or possibly fatal, and another 200 pages crammed full of other helpful virus related information too.

The official “do nothing, stay at home, rest, and drink lots of fluids” response from the CDC is laughably inadequate, as was shown when President Trump was immediately given a wide range of different treatments (and then recovered extremely quickly, even though he is elderly and overweight).  But – as people who have had the virus tell me – trying to find a doctor to suggest what active measures you can take is very difficult.  My book might materially improve your chances of both avoiding and, if necessary, surviving the virus.

Still on the topic of advice about the virus, this is an excellent must read article.  It starts off strongly by pointing out the tapestry of contradictions in the current mare’s nest of restrictions and regulations about what you can do and not do.  These are not only contradictions between different jurisdictions, but within a single jurisdiction.  For example, why did states urge people not to meet for Thanksgiving dinners in their homes, while still allowing restaurants to stay open?  Why are businesses closed but schools open?  (These two examples are both in NYC.)  Why, in RI, are you not allowed to invite a single person into your home, but you can have a meeting of up to 25 people in a restaurant?

The article unsurprisingly asserts that no part of what we’re doing makes any sense at all.  Unfortunately, the article then takes the easy way out and instead of pressing the public health authorities about their illogical inconsistencies, the article says it is all President Trump’s fault.

It will become a lot harder to write articles like than on 22 January….

I mentioned, above, how the CDC is studiously “not seeing” the growing wellspring of data about the many different early-exposure treatments, some of which have official status as approved care actions in other countries.  This is a stunning failure on the CDC’s part.  Even when the “Hail Mary” vaccines finally get out there, we know not everyone will be vaccinated, and not every vaccinated person will be protected from infection.  We need to have effective low-cost treatments and cures every bit as much as we need vaccines, and we will still need treatments after vaccines have been made available for all.

So it is great to see that other countries and other entities are still pressing on with treatments as well as with vaccines.

I added some more data to the three international tables, showing the actual rates for the top and bottom listed countries in each of the three tables.  That helps us see, for example, that ND’s case rate (10% of the state have now been infected) is worse than that of any country in the world, and the same for NJ’s death rate.

It is also interesting to see the enormous spread even between 1st and 10th in the three international tables, and the huge spread between best and worst in the US state tables.

Panama reappears on the minor country list, Italy on the major country list, and France on the death rate list.  It isn’t only the US that is being recidivist at present.

You’ve doubtless seen the prominent coverage for several airline commissioned studies of how “safe” it is to fly.  Unsurprisingly, the studies the airlines have been involved in or paid for have shown it to be very safe.  Those same studies have been criticized for not reflecting the reality of how airplanes actually operate – you probably haven’t seen coverage of the criticisms quite so prominently featured.

But the strongest rebuttal of all is to point to real world events where people have been known to catch the virus on a flight.  These are rare, because to be 100% sure, you not only need to be certain that each person caught the virus on a plane rather than in the terminal before or after their flight, or even earlier before or later after their flight, you also need samples from each infected person on the flight to check to see if they have the exact same virus strain as the other people who also were infected.  With the nature of flights by definition making it hard to track down people days later, an uncoordinated uncentralized healthcare response, and with many countries having overstressed public health systems, this type of additional “detective” work is seldom done.

However, here’s a very clear and very damning study of passengers infecting each other on a flight, even when some of them were as many as four rows away from others.  It also points to the nonsense of requiring a negative virus test up to three days before traveling, because all the passengers had those negative tests before boarding the plane, but clearly one of them was already infected.

As a bonus, this article cites two more known cases of passengers infecting each other on flights.

I’m not going as far as to say that flying is massively more dangerous than other activities.  But I’m definitely not saying that it is perfectly safe, or that (as one study ridiculously said) you’ve more chance of being hit by lightning than catching the virus on a plane.

High on the list of contentious topics that you’d think have been resolved by now is that of masks.  Should you wear one or not?  Some people continue to believe masks are of no use.  For those people, here’s a good article that reports on a new study that shows how a good mask can protect both the wearer and the person around them.  Emphasis on the word “good”, though.

The article and study says a mask should have three layers – two outside layers that filter out major dust and which provide a softer surface next to the face, and a special filter layer in the middle.  Repurposing an old t-shirt or sheet isn’t suitable, even if there are three layers of it, because none of the three layers is a dense filter layer. 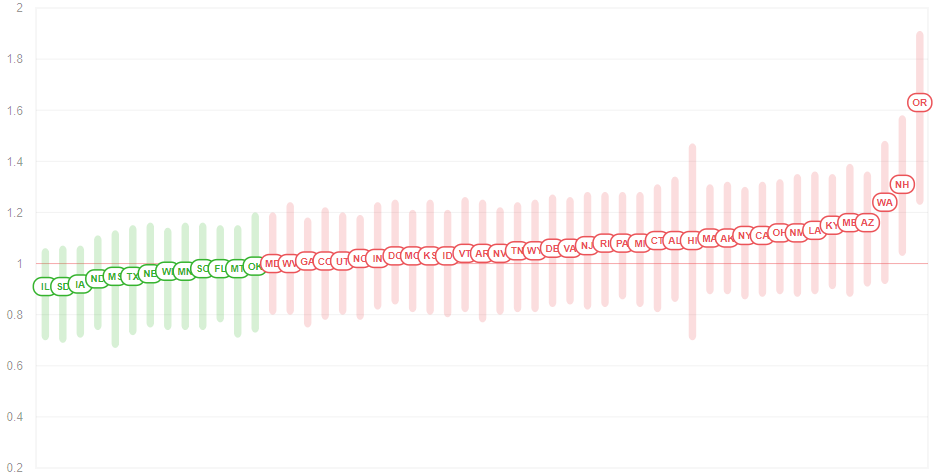 I was increasingly anxious all day Saturday, and then again on Sunday until 5.34pm.  The excellent rt.live site that I rely upon for data on whether state case rates are trending up or down was silent.  Normally they update moderately early every morning, and they’ve been updating daily without exception since they started in, I think, April.

But there were no updates at all on Saturday, and it was only at 5.34pm today that an update appeared.  Phew!

So I can tell you that on Thursday, there were 8 states with shrinking rates of new virus cases.  That grew to 10 on Friday, then we’ll quietly skip Saturday and move on to Sunday, with now 13 states having shrinking rates.  That is an encouraging trend, let’s hope the number of states with dropping case rates continues to grow.

As for Oregon’s extraordinarily high rate of new case increase (an R value of 1.63), my guess is this is a short term blip and will probably be adjusted back down in a few days time.  Maybe the Thanksgiving work schedule is throwing some data off a bit.

I’d mentioned on Thursday about a strange new scoring by Bloomberg of 53 countries and how “resilient” they are to the virus.  I’ve now found the entire table and scoring methodology, and as I’d suspected, it is indeed a strange way of scoring/ranking countries, including such seemingly unrelated considerations as life expectancy, education, and income.

Amazingly, Bloomberg says the US has a severe lockdown in place.  Not that I’ve noticed.

Plus the methodology included a dismayingly nonsense measure – the positive test rate.  This is based on several different factors, and is very hard to simplify into low=good and high=bad levels.

Another nonsense was to count the number of different potential vaccine suppliers a county had arrangements with for vaccine supplies.  The larger the number of suppliers, the better the rating given.  But surely the important issue is not how many suppliers, but how many vaccine doses are arranged, and when they will arrive.  A country with contracts with five suppliers, but for very few doses, and at the bottom of the priority list, scores higher than a country with a contract with only one supplier, but with highest priority supply of sufficient doses for everyone guaranteed.

Those mismatches are acceptable when there’s a steady number of cases every month, but when case rates are rapidly rising (or falling) – and they are rapidly rising in most countries at present – the CFR becomes grossly misleading.

So, as I thought, a meaningless set of rankings, but nicely presented on the webpage.

Just when you thought it couldn’t get any worse, it seems there’s a Bird Flu outbreak in England at present.  I’ve noticed some worrying signs of possible Bird Flu in England for a couple of weeks, and it is now confirmed as present, with a mass slaughtering of turkeys in northern England.  The other notable outbreak was in the southwest of England, a couple of weeks ago, which makes me wonder just how widespread it might already be.

The good news is the H5N8 type Bird Flu that is present has not infected any humans, so far.

The CDC is expected to soon reduce the 14 day quarantine time for people who are being tested multiple times during their quarantine.  This would be acceptable if there were no possibility of being infected while quarantined, and if a person was shown to have no infection by at least two tests, with the two tests being ideally a week apart.

The virus keeps getting stranger and stranger.  The newest side effect for people who suffer from the virus for extended periods may possibly be having their teeth fall out.