At about midday on Friday, the official US case count passed through the 10 million mark and continues to set records for new cases reported each day.

On Saturday we passed through the point where now more than 3% of the entire country has had the virus at some point.  That is either a lot or a little depending on your perspective, and when we consider that in the increasingly unlikely event that herd immunity might be achievable, we’d probably need over 60% of the population to have recently been infected, we’re only 1/20th of the way there.  Nothing how getting to that point has cost us almost a quarter million deaths, does anyone feel good at seeing the total deaths increase to 5 million in the hope we’ll get a short term herd immunity in return?

The world case count passed through the 50 million mark on Saturday.  It also broke through the 1.25 million death point the same day.

It might be interesting to note the US states that have suffered the most and fewest infections.  Here’s a list of the top and bottom five states (numbered to 51 due to including DC) – data as of late Sunday.

It might also be interesting to see the states with the best and worst death rates.  The data is again as of late Sunday.

We’ve commented before about the strange and extreme variations between countries around the world.  It is interesting to see, within the US, there is also a huge difference between the most and least affected states.  Some of this gap might reduce over time as the virus “averages” out its penetration, but at the current point, it is already everywhere and it is surprising to see the enormous disparities between the winning and losing states.

One more point – the two worst scoring states for rates of virus infections – ND & SD – are two states that have never required their residents to wear masks, and of course were affected by the Sturgis motorbike rally, too.

Some significant changes to the lower part of the minor country list.  The Vatican has disappeared again, Tahiti and Montenegro have appeared, and Luxembourg has shot up to 5th place.

In the major countries, Belgium and the Czech Republic seem unassailably secure in their top slots.  France is moving steadily up and we expect it will displace Argentina by Thursday, probably moving past Peru as well.  Portugal has shoved the UK off the list, claiming the bottom slot.

Argentina has appeared on the death list, moving directly to seventh place.

Here’s an issue that has occasionally been pondered before – the potential for the virus to be sexually transmitted.  But this article also teases another issue that isn’t fully explained – might the virus make men infertile?

And now for three items of good news in a row.  Is that a record?

This article suggests the possibility of stronger and maybe longer lasting (as in longer than a mere three months) immunity after an infection.  But with a study base of a mere 87 patients, I’ll hesitate before breaking out the special bottle of wine I’ve been saving for something truly good.

Here’s a very exciting distant early warning type article suggesting it may be possible to develop a simple nasal spray to give us protection.  Just a quick squirt in the nose each day and you’re safe for the next 24 hours.

How long will testing, trialing, and then an FDA approval take for this spray, though?  That sounds like a minimum of a year and possibly longer, always assuming the initial testing in ferrets translates to positive results in humans too.

Another in the continuing cascade of good news about ivermectin, a drug which, for all intents and purposes, continues to be totally and inexplicably ignored in the US.  This latest study is suggesting it might be valuable as a preventative type measure (as well as having curative properties if you are infected), with a double strong dose, three days apart, resulting in a month of immunity, and then top ups requiring a single dose, not two, monthly into the future.

Each “dose” is a simple pill, no need for IV drips or anything complicated or hospital based.  Ivermectin is readily available, dirt cheap, and very safe for almost everyone. 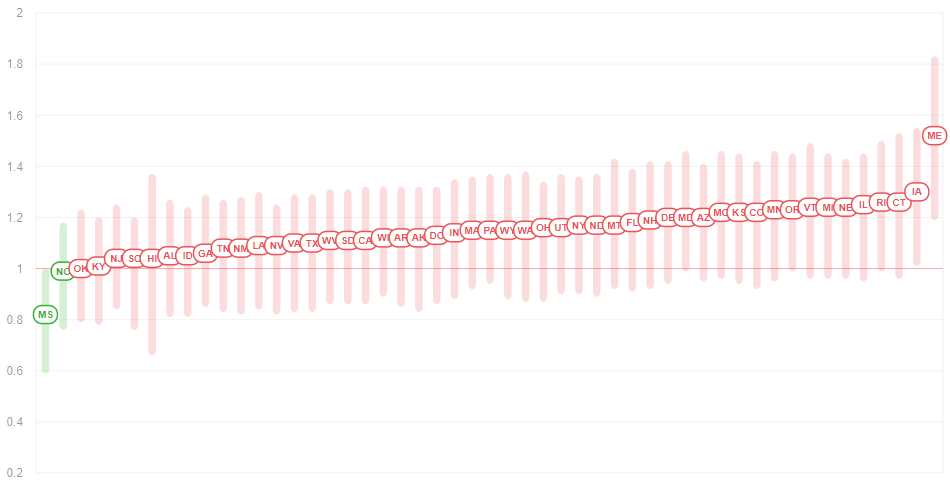 Thursday, Friday and Saturday all saw only Mississippi with dropping rates of new cases.  Today, North Carolina reported a very slightest decrease too.

As you know, I’ve been increasingly urging you to stock up on anything you might need to stock up on, for fear of what the winter and the growing numbers of new cases may bring in terms of new shortages.

This article advises that some supermarkets are now starting to ration toilet paper, paper towels, and disinfecting wipes.

This virus experience has seen some strange things happen, but I think this article, about the, ahem, Belper Moo, wins the prize for the strangest of all.  So far….