That’s a bit like two approaches to road safety.  Approach (a) is “We’ll teach everyone to drive and require a high standard of competency before we issue a license”.  Approach (b) is “Anyone can drive anything, but we’ll make seatbelts and airbags mandatory”.  Which strategy do you think is better?

Ideally of course, the best strategy, both for road safety and public health, is “both”.  But, if forced to choose, which would you personally prefer?  Not to be infected by the virus?  Or to be infected, end up hospitalized, and suffer a stay in the ICU as part of that stay?  Even with health insurance, you’re probably up for some hefty amount of copay, deductible, and medication costs, and may emerge (with your internal organs) literally scarred for life.

There actually is a rational reason for focusing not on severe-case treatment, but instead on reducing the spread of new cases and the severity of them.  You see, there’s a “positive feedback loop” – the more active cases out there, the easier it is for more active cases to be passed on.  Currently it seems that perhaps one in every hundred people might have the virus in an active/infectious state.  If you are in a store with 99 other shoppers, someone is probably infected, making it more likely you’ll catch the virus yourself.  The risk of becoming infected is obviously lower if the number of infected people “out there” at present is lower.  It is better to start at that end of the “disease funnel” and lower the number of people at risk and with early infections, than it is to focus on the end of the funnel, the number of people at risk of dying.

One more point.  Our focus on late stage care isn’t working significantly better than other countries and their different strategies.  We’re running around a bit below a 2% mortality rate, and the average is a bit above 2%.

It might seem to be unhelpful to observe the difference between the worst affected and least affected countries, because there are probably many different factors that combine to cause such a spread between the worst and least affected countries.  Actually, the more unrelated factors there are that influence these rates, normally the more closely you’d expect all rates to be, because the different factors would tend to average each other out.  The fact that the rates are so widely spread argues against random chance.  There is something, or several things, that are massively changing how countries are experiencing this virus.

If we reduced our numbers 500-fold, we’d have a mere 33,000 cases in total (instead of 200,000 new cases every day) and 613 deaths.  Is one of these important factors a different approach to public health and disease control?

We can’t close our eyes to this enormous difference.  We must track down the reason, and use it in our fight.  Here’s a suggestion to the CDC and (ugh) WHO.  How about taking a few measly millions from your multi-billion dollar budgets to investigate this.  How is it that Southeast Asia and Africa has such low rates of the virus, while Europe and the Americas have such high rates?

There have been three explanations proposed already.  Greater HCQ use in the least affected countries, widespread ivermectin use in those countries, and the BCG vaccination which also seems to have been more widely adopted in the better performing countries.

It is as likely that the big changes are based on public health matters or some other matters of national policy, because sometimes there are huge differences between two countries that share a common border and otherwise seem to be very similar.  The starkest example of that is in Africa, with very bad numbers in South Africa, and very good numbers in the states adjacent.

We’re subsidizing big pharma with billions of dollars to come up with wonder-drugs and unproven vaccines.  But maybe a better answer is available, at massively lower cost, somewhere in SE Asia and Africa?

One other introductory comment.  I urge you to read some of the submissions given to a Senate Committee hearing last week.  While I don’t agree with all the comments in all the submissions, there’s a common thread running through many of them about how the US is spurning low cost safe treatments that have been available and known about for months in favor of unknown futuristic “vaccines” about which very little is known, and which are being developed at high cost.

Oregon has improved and swapped places with NH in the case rate table.  CT and LA swapped in the death table.

Slovenia’s brief appearance in the minor country table has ended, and Georgia is now present, in ninth place.  Poland has appeared on the major country table, while Chile has dropped off.  The US is slowly closing the gap between itself and the two worst nations of all, and also passed through the point of having 5% of the entire US population having been infected this weekend.

On the death list, the US is now firmly in sixth place, but the UK is keeping ahead of the US, so fifth place remains out of reach for some time.  Italy rose two places at the bottom of the list, while Mexico dropped two.

It is an ongoing series of dismaying revelations as more details emerge of WHO’s response to the Covid pandemic.  It is widely known they “pulled their punches” to start with for fear of upsetting China, and now this latest report explains how they chose to go easy on Italy, too.

There’s such a lot of news now about vaccines that I thought I’d create a separate section, although I’m not going to pass on to you every last report of every last plan to get vaccine doses everywhere as soon as possible.  As I’ve explained before, I have significant reservations about some of these new vaccines, and am terribly conflicted as to if I should be cheering them on or decrying their distribution.

But, with that aside, some good and bad news – I’ll let you choose which is which.

One of the two Chinese vaccines has now been fully approved for use in the UAE.  The UAE deemed it to be 86% effective, although that decision was made on a very small sample size.

So many different countries are racing to develop their own vaccines.  It seems to have become a matter of national pride.  Even countries like Kazakhstan are touting their local medical science achievements and are developing their own vaccine, even though they have choices from their neighbors Russia and China.

Another country developing its own vaccine is Australia, but they’ve had to put their program on hold (or possibly terminated outright) for now due to a problem with “false positive” results for HIV tests resulting after being vaccinated.  A false positive is a nuisance, for sure, but is that a reason to outright terminate the contract between the Australian government and the vaccine developers?

Maybe Australia has decided to just sit back, relax, and take one of the other vaccines that are at a more advanced stage of approval, and this is merely a face-saving excuse to justify turning away from their home grown product.

A jointly developed vaccine being created by Sanofi and GSK has suffered a setback.  The reagents needed to make large quantities of the vaccine were inappropriately formulated.  Apparently this mistake will delay their schedule by nine months or so.

The Democrats are proposing a “carrot” to match the private sector’s “stick”.  We anticipate that more and more companies will make vaccination mandatory for their customers and employees.  But as a positive inducement, the Democrats are suggesting making any second stimulus check dependent on being vaccinated first.

How much would you have to be paid in order to agree to be vaccinated? 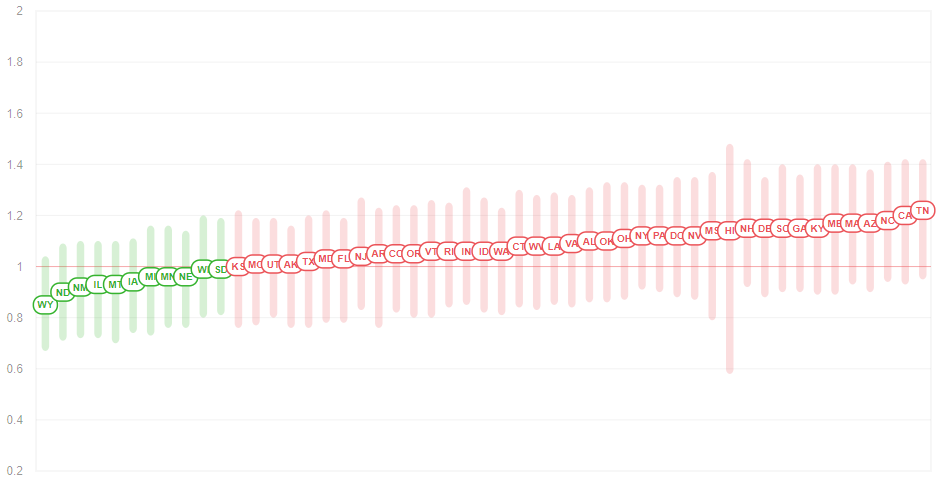 We had a mere eight states with dropping case numbers on Thursday and Friday.  This rose to 9 on Saturday, and 11 today.

Of note, Arizona and California have been the worst performers for most of the last week, although TN and NC shared the top three places with CA today.

Germany will go into a “hard lockdown” on Wednesday, and continuing until at least 10 January.  This is after an earlier “soft shutdown” from early November had little effect.

The concept of a hard lockdown sounds fairly clear and potentially impressive, and Germany’s stereotypical love of strict control and clear orders springs to mind.  But, ignore the impressive phrase “hard lockdown”.  How hard is it in reality?

Answer – not very.  For example, children are “encouraged” not to go to school, and employers are asked to “urgently consider” closing workplaces “where possible”.  People are “encouraged” to refrain from “non-essential” travel.