There’s been a lot of news, the last few days, about a new strain of the coronavirus discovered in England, and its implications.

In short, it seems this new strain may be more readily passed from person to person.  I’ve put a copy of an investigative report into the new strain online for you to review if you wish.  The analysis is preliminary rather than definitive, but several different indicators seem to suggest this new strain can and is spreading more rapidly than other strains.

There are a couple of other things to keep in mind.  The first is the seemingly bland statement

Antigenic escape. The location of the mutations in the receptor binding domain of the spike glycoprotein raises the possibility that this variant is antigenically distinct from prior variants. Four probable reinfections have been identified amongst 915 subjects with this variant but further work is needed to compare this reinfection rate with comparable data sets.

What is antigenic escape?  It means when a virus changes such that the body’s immune system no longer recognizes it as a known threat and no longer knows how to respond to it.

Actually, the numbers quoted don’t necessarily point to antigenic escape.  The numbers are almost exactly what you’d expect if the acquired immunity after infection fades after three months, which was an earlier guesstimate.  But we’ll have to wait and see what the explanation is, and in particular, what the implication might be in terms of the vaccines just now starting to appear.

The other thing, not mentioned in the document, but referred to in this article, is that the virus is mutating all the time.  Indeed, as more and more instances of the virus are out there, it will seem to mutate more rapidly.  There are known to be at least 1,000 mutations having occurred so far.  Most mutations are of little or no impact, and some are as likely to harm the virus as make it “stronger”.  Unfortunately, with this “evolution in action”, mutations that are not beneficial to the virus (but potentially beneficial to us!) don’t survive.

Oh, back to the antigenic escape.  Here’s a technically complex paper, but it suggests that this may be occurring elsewhere, too.

So, if you want some pre-Christmas gloom, imagine every day you’re playing Russian roulette.  The best case scenario is you live to play the game again tomorrow.  The worst case scenario?  Doesn’t bear thinking about!  It is worth remembering the Spanish ‘flu came back in the second year in a new more virulent form.  That of course doesn’t predestine the same to happen to this virus too, and there’s still the “Hail Mary” hope of the vaccines working safely and remaining effective for many different mutations.

But don’t throw away your face masks just yet.  And you still stand to get enormous benefit from a copy of my book, The Covid Survival Guide, now available for pre-order on Amazon, and scheduled to be electronically in your hands some time late Monday/early Tuesday.

Still talking about the UK, I was chatting with a friend there about the impact of the virus on their Prime Minister and his popularity.  He expects Johnson will be out of office by Easter, in large part because of the approach the British have taken to the virus, and perhaps also as a bit of post-Brexit fallout – at present, the final exit from the EU is scheduled for the new year and much has not yet been arranged or coordinated.

He is probably right, but I was reflecting on the unfairness of this.  When faced with a choice between blaming

it seems pre-ordained who the obvious scapegoat will be.  While he definitely has made a stunning dog’s breakfast of every part of this saga and his uncoordinated, confused, and contradictory approach to it, the reality is the virus is an implacable foe, and the “public misbehavior” issue is also a massive contributor.

Why do I say that?  Well, after announcing that due to greater than expected levels of virus prevalence and the new 70% more infectious strain breaking loose, Boris announced even stricter lockdown measures, and cancelled the earlier break in restrictions over the Christmas period (something that was always a strange and ill-advised concept).

So what happened in the few hours between that announcement and it taking effect?  Did people cancel their travel plans, stock up on food and toilet paper, and get ready for a less joyful Christmas where they live at present?  Or did they rush to the nearest train station to urgently travel before the lockdown started?

This article and video shows the unsurprising response.

I feel sorry for Boris and his seemingly inevitable ouster from office some time in 2021.

In the US, North Dakota suddenly appeared in the death rate list, displacing Louisiana which dropped four places.

There’s not much movement on the death list, although the US is slowly closing the gap on the UK.

Remember all the hate that was lavished on hydroxychloroquine, notwithstanding the overwhelming abundance of evidence in its favor?  History seems to be repeating itself, with another low-cost well-known widely-prescribed and very safe drug, ivermectin.  Yet again, the main stream media are rushing to condemn it, albeit without pausing to consider the underlying facts.  This is a disappointing analysis, and here is a list of what the studies are actually reporting about ivermectin use.

Think what you will about HCQ, but I’m steadily coming to the view that ivermectin has even more promise/potential than HCQ.

But the supporters of HCQ are far from giving up.  Here’s another study – this one being both refereed and now formally published as well.  It evaluates HCQ use in the scenario it has been most advocated for – early infected patients, and in conjunction with zinc and azithromycin.  It finds positive outcomes resulted from the treatment.

I’ve often written about how valuable fast virus testing is, and how desperately we need it.  I’ve also sometimes written about new tests due to come onto the market that offer fast testing.  But I’ve noticed not all of them ever turn up in actual production and available in measurable quantities.  It seems there may be a very bad reason, in at least one case, why that is.

The Pfizer vaccine continues to create life-threatening allergic reactions to a small number of people being vaccinated.  Interestingly, this allergic reactions are surprising the patients who are taking the vaccines, even when they are, themselves, doctors.  You’d think a doctor in their, say, 40s, would know if they were at-risk of allergic reactions from vaccines or not.  But apparently that isn’t the case, or maybe they have decided they’d prefer to risk a severe allergic reaction now rather than risking possible death from the virus later.

But the bright flashing message to all of us has to be “Why did none of this turn up in testing?”.  Many tens of thousands of test subjects were vaccinated, and no severe allergic reactions were reported by Pfizer in any test subjects at all.

Even people who don’t need an urgent jab from an epi-pen are sometimes reporting stronger than expected reactions.  Some places are now requiring people to stay present for observation “just in case” some reaction appears, for 30 minutes.

One more point on this.  In general terms, it seems the body’s reaction to the second shot is at least as strong, and maybe stronger, than its reaction to the first shot.  I wonder if those people who had near-death experiences with their first shot will proceed to take a second shot?  The FDA is investigating.

Something I’d written about earlier continues to be talked about and hopefully urgently investigated – the concept of people taking more than one vaccine, in order to secure broader protection from the virus.

That seems like a good idea, and it has been used in other vaccines in the past.  But those other vaccines were “real” vaccines and simply exposed our body to weakened/inactivated virus particles, rather than to the new futuristic ways of trying to train our body to get ready for the coronavirus.  Does a double vaccine double the vaccine’s effectiveness, or double its risk?

Actually, that’s a question that can be at least partially answered.  With vaccines claiming 90% – 95% effectiveness, a double vaccination would only add another 5% – 10% to its total effectiveness.  As for twice the risk, I don’t think anyone really knows what the level of risk is and how it would be impacted by “double dipping”.

How much do the vaccines actually cost?  Actually, I answered that question a week or so back, showing “best estimate” data.  And now, a Belgian minister accidentally sent out a public tweet showing the price list of all Covid vaccines.  They’re not all that expensive, even after allowing for two doses per person. 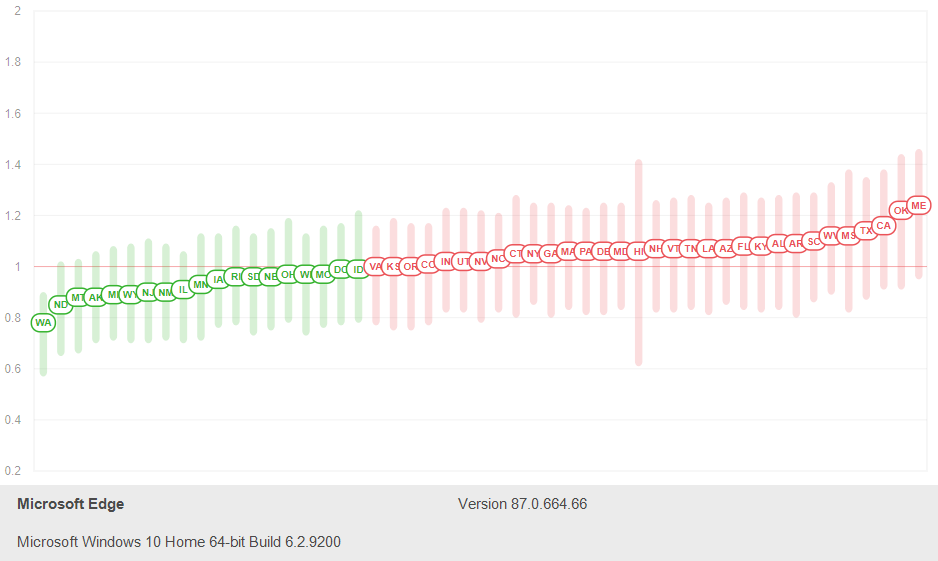 After reporting 17 states with falling case rates on Thursday, the number dropped to 16 on Friday, then rose to 21 on Saturday, and today is back at 19.  California has been one of the three most growing states every day, and Maine has been the very worst of all on all three days, and is now experiencing new cases at a rate almost nine times higher than its earlier peak in late April/early May.

I know many people judge cities by the availability and quality of public bathrooms.  And I also know, from personal experience, New York’s public bathrooms are rare and very hard to find.  But at least, by law, restaurants and bars have to provide bathrooms for their patrons, so one could always use the need to access their facilities as an excuse/justification to stop for a snack or drink.

Not so much for a short while recently.  As part of a Covid safety measure, the Governor issued an order forbidding patrons, restricted to only outdoor dining, from going inside a restaurant to use the bathrooms.

After public outrage, the order was subsequently rescinded.  But, really.  What type of morons are employed by the state, by the governor, by the Office of Counsel to the (NYC) Mayor, and by the State Liquor Authority.  Maybe they’re super-human, maybe they never drink when they eat, or maybe they come equipped with special absorbent diapers or “traveler’s friend” bottles and tubes.  How could so many people in so many different departments not realize how ridiculous that prohibition was?

I’d like to see a picture of some of those people, wearing masks.  Because I’ll wager they probably wear the same type of mask Tom Cruise has been spotted in – masks that redefine the meaning of selfishness.  You see, they are masks with vents on them.  The vents close when you’re breathing in, to make sure the air you breathe in has been filtered.  But when you breathe out, the vents open allowing your own possibly infected breath to travel unimpeded into the area around you.

You think United – and the other airlines – would know enough about human nature by now, having meekly watched as passengers by the tens of thousands lied about needing their comfort and support animals with them on flights, and then, when required to produce certificates, either from doctors attesting to their need, and/or proving the trained status of their pet, forged them.

But, no.  United allows people to simply say “I don’t have the virus” and the airline accepts the statement at face value.

Which makes it unsurprising to the cynics among us when events such as this transpire.  It would be a cheap shot to say it served the guy who lied and died right.  Whether it did nor not, the people who certainly didn’t deserve to participate in the intimate moments of his death, and the subsequent delays and disruptions to their own travel, are the other 179 people on the plane with him.

The sooner we get affordable and immediate testing, the better.