A quick reminder.  My Covid book goes up in price from its current “opening special” price of $4.95 to $8.95 on Monday, probably late in the day (I’m not sure how quickly Amazon adjusts prices).  While I’d be happy for you to buy it at the higher price, I’m just as happy to see it in your hands at the “opening special” price too!

The only person who ever thought we’d have vaccines approved and in distribution prior to the end of 2020 was Donald Trump.  Everyone else was much more pessimistic, and we as a nation largely accepted the preponderance of opinion that we’d have to wait until who-knows-when for vaccines.  We also all knew that when the most likely vaccines did get approved, they’d be two-step vaccines, requiring two shots several weeks apart.  This too was understood, accepted, and planned for.

The good news is that two different vaccines were approved way ahead of everyone-but-Donald-Trump’s expectations, and a third is expected to be approved soon, with more getting close to applying for approval too.  We already have several million people vaccinated.  We’re way ahead of anyone’s schedule and hopes.

So why, then, is there a seemingly irresistible pressure to break the vaccination protocol and give possibly twice as many people a single vaccine shot, while giving no-one the necessary second vaccine shot?  The vaccine makers themselves say this is a very bad idea; it is untested, and with unknown outcomes.  Why isn’t the FDA up in arms about this?  It is no stranger to activism – it banned HCQ trials on the most specious of grounds, and it has a formal testing/validation protocol for vaccines that has not been conducted for the single dose concept.  Apart from some mutterings, the FDA is not saying that vaccinators must comply with the officially approved dosage regimen.

Sure, there’s an immediate seductive appeal of getting twice as many people half-vaccinated, but what happens in a few months time when we discover that half a vaccine is no longer any better than no vaccine at all?  What happens when, instead of having possibly tens of millions of people with full protection, we now have twice as many people, but with no lasting protection, and needing a new vaccination protocol that has not yet been developed, trialed or tested.  Do they then get a full double shot, or two half strength shots, or what?  With the same spacing between the two shots or different?  Or maybe just one extra-strong shot?  Or, or, or?

That’s a bit like a student pilot first learning to take off, and as soon as he has learned that, going off to fly solo.  “Sure, it took me a few attempts to get it right taking off, and maybe it will take a few attempts to learn to land, too, but I’m sure there won’t be a problem”……

A note to all the people celebrating that Joe Biden will soon bring a rational and effective commonsense approach to managing and solving our virus problem – a comment I see repeatedly being expressed on Twitter.  This is presumably the same Joe who showed his rationality and commonsense when arguing against closing our borders, describing Trump’s 31 Jan closure as xenophobic on Feb 1, and still arguing against it and calling it xenophobic on March 18.  Even Dr Fauci agrees that closing the borders to higher-risk countries was and remains a great policy, and over time, most other countries copied us, even to the point of now closing their borders to us.

Now, flash forward, Joe is supporting the idea of giving half shots to twice as many people.  This concept remains just as crazy/wrong with his support as it was before he decided to climb onto that bandwagon.

If you choose to get the vaccine, try as seriously hard as you can to get a commitment there’ll be a second shot of the vaccine for you three (Pfizer) or four (Moderna) weeks later.

In the US, no changes of states in the case list, although some changes in ranking.  On the death list, the worst five states saw two new entrants, SD and RI.

In the minor country list, no new entrants, but Gibraltar has shot up from fifth to second place.

In the major country case list, also no new entrants, with the Czech Republic extending still further its lead over second place USA, and Belgium falling even further behind in third place.  The UK has moved up two places.  The Czech Republic is showing little sign of slowing down its rapid rate of new cases – averaging 1,165 new cases per million people a day.  For comparison, the UK is averaging 880 and the US is averaging 750.  China, which locked down over 10 million people last week, is averaging 0.03.

No new entrants in the death list, but the US moved up two places to fifth place.

In the case of the virus, the more virus particles out there – ie, the more infections, the sooner it is that one of the always ongoing mutations will become an unlucky “Ace of Spaces” type mutation.  So it is unsurprising to see, after only variation of note some months ago, all of a sudden now, there appear to be a profusion of new bad mutations. 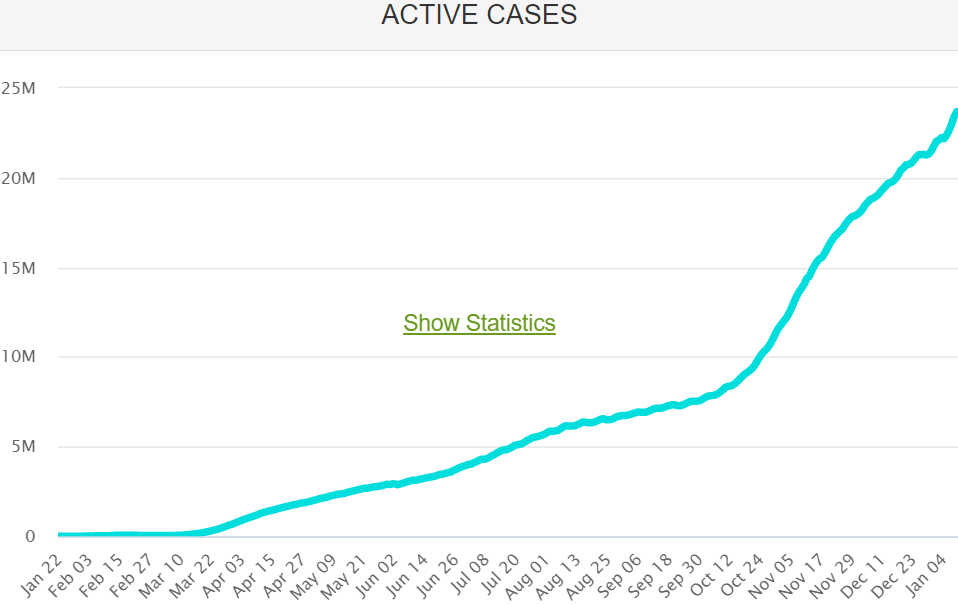 This chart shows the number of people, worldwide, who at any given time have a virus infection.  As you can see, that number has been, and continues, to steadily grow.

So it is no wonder that the rate of new bad mutations is rising to match.  It has been discovered there are separate more-infectious mutations in both the UK and US, and then a third in South Africa, and fears of possibly others elsewhere.

This is one of the obscured but very important downsides of allowing virus case rates to spiral upwards – we’re making it more and more likely the virus will become more deadly.  People who think “Oh, I’m young and healthy, the worst that will happen is that I’ll just get something like a moderate dose of the ‘flu” are dead wrong.  Quite apart from whatever impact on themselves they might experience, they’re giving the virus another chance to mutate into a more dangerous form.  This is a danger to the entire community, country, and world, and all the more reason that we must start reducing our case counts, here in the US most of all, and in other countries too.  More details here.

This article points out that one of the reasons for the more infectious properties of one of the mutations is because the virus replicates in the throat.  It doesn’t have to go as far before it starts replicating, and it is easier for virus particles to be exhaled again.

We wonder if some of the anti-viral sprays we discuss in the book might help minimize this risk.  Something to keep in mind, and that reminds me, I need to restock my quercetin spray.

More reason to avoid getting infected – this article suggests that about 75% of Covid-19 survivors are still suffering some symptoms six months later.  That’s a more gloomy view than we’ve seen before, but maybe it is correct.

We’ve been optimistically reporting many positive trials and studies on ivermectin as a possible treatment and possibly preventative for the virus.  Just a day or two ago, a reader wrote in reporting how he believes it may have been very helpful to both himself and his wife (do read his comments, here).

Perhaps I should share Oleksandr’s comments with the South African authorities.  They’ve made ivermectin illegal, as if it were a narcotic drug, and are raiding hospitals they suspect might be illegally importing and prescribing it.

This is extraordinary, and all the more because ivermectin is widely taken in other African countries (for its anti-parasitic properties) and some people wonder if that is part of the reason why most of Africa have astonishingly low rates of Covid, whereas South Africa has a vastly higher rate.  South Africa’s case rate of 20,629 per million is almost twice the world average of 11,633, and is higher than all but two of the 57 countries in Africa.  49 of the other 56 countries have rates less than half that of South Africa, and 40 have rates less than 1/10th that of South Africa.

At the same time our leaders are panicking in their scramble to vaccinate as many people as possible, the reality is that in some cases, doses are being wasted and not being taken prior to their expiry, and many more doses are sitting undistributed due to inefficiencies and bureaucratic messups.  Maybe they should fix that first, before then giving people half-doses and hoping it will be good enough.

Then there’s the significant number of people who just don’t want to be vaccinated.  This number varies wildly depending on the survey, but seems to be around the 50% mark in the US.  I guess everyone has their own reasons for choosing to be vaccinated or not, but here’s some news that almost certainly will discourage more people from accepting the vaccine. 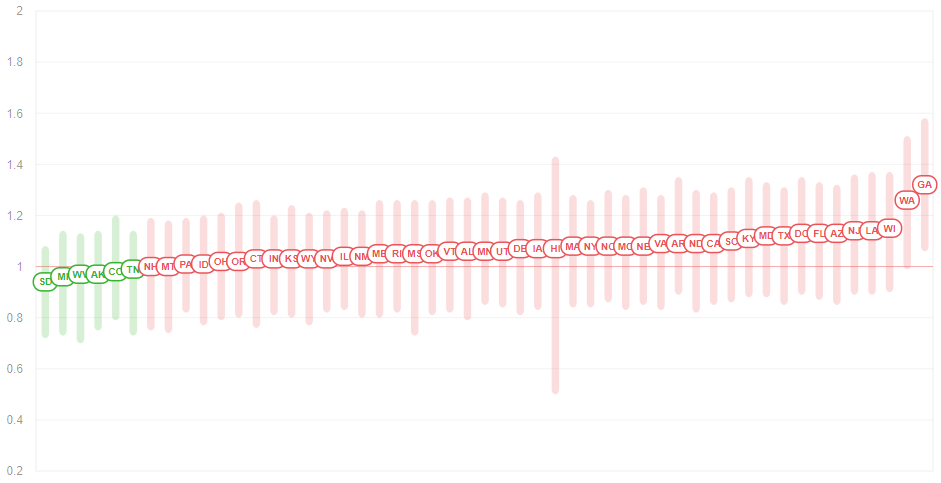 It has been a grim period since we last reported only 5 states with dropping rates of new cases on Thursday.  Friday saw that reduce further to four states, then three on Saturday, and now the slightest of improvements to six, today.  Georgia has been the worst offender for the last little while – possibly as a result of the senate campaigns?

Surely we’re all hoping that by some time later this year, everyone who wants to be vaccinated will have been vaccinated, and life can start to return to normal.  While we feel awkward at forcing people to be vaccinated, we definitely don’t think any country should continue to impose lockdown type restrictions on itself just because of virus refuseniks.  When there’s the option to be vaccinated, mandating lockdowns is as inappropriate as it would be to do the same for the annual ‘flu.

So we find the prediction in this article puzzling and far from encouraging.  It is true that Britain’s experts seem to have had a poor record of predicting the future, but suggesting there might need to be new lockdowns for next winter (2021/22) and the winter after that too (2022/23) seems to be spectacularly over-pessimistic.