Welcome to 2021.  For us all, I am certain it is a year of hope, a year in which we desperately want to be free of the virus and to have life return back to normal.  The promise of vaccines seems to all but guarantee us that outcome.  I dare to be hopeful, too, but I don’t find myself as certain as some people about what 2021 holds, or on what schedule our return to normalcy will proceed.

But I feel the way we’re mismanaging the vaccines is about as close to unbelievable as anything that is really truly happening, in front of our very eyes, ever can be.

As I described in last Thursday’s diary entry, we are astonishingly slow to distribute the vaccines and to actually get them where they are needed – into the arms of at-risk people.  We have also experienced appalling incompetence, injecting people with the wrong thing, and even deliberate sabotage of vaccine doses.

But Thursday was a year ago, wasn’t it.  31 December 2020.  A lot has happened already, now that we’re in 2021, but none of it very good.  In Britain, two things in particular were unbelievable.

First was an announcement that the country had decided, based on almost no medical grounds whatsoever (other than – and you can’t make this up – some thin results as a result of errors and mistakes in their AstraZeneca vaccine trials), to change how it administered the vaccine.  Instead of a pair of doses either three or four weeks apart (depending on which vaccine was being used), Britain said it would use up all its vaccine doses now, to give twice as many people the first dose, and then wait 12 weeks or so and hopefully by then there would be enough additional supply of vaccine to give a second dose to everyone who had been dosed once.

But there has been no testing of the main Pfizer vaccine Britain is deploying for a delayed second dose.  Pfizer says the second dose must be 21 days after the first dose, with a maximum variation of plus or minus four days, but ideally, as close to 21 days as possible.  Our oracle, Dr Fauci, confirmed there was no basis in fact for being able to delay the second dose.

Then, the next day, Britain may or may not have gone even crazier, by saying it doesn’t really matter which vaccine be used for the second dose.  At present Britain has two vaccines approved for use, one by Pfizer, and the other by AstraZeneca.  But – and this is the crucial thing – they are not merely different brands of the same vaccine formula.  They represent totally different methods of creating immunity in our body.  There is no evidence at all that mixing together a dose of one type of vaccine with a second dose of a totally different type of vaccine would work.  Britain is hoping – with, again, no medical evidence at all to support this hope – that by mixing half and half, you end up with something that works two ways.  The danger of course is that you end up with something that doesn’t work well in either way, because you’ve only had half the necessary dosage of each vaccine.

The howls of outrage reached new levels after than nonsensical statement, so Britain tried to walk it back, by saying it never recommended such a strategy, but indicated that, in an emergency, it would be better than nothing (which is essentially how it had been originally and accurately reported).  We don’t even know if that is a true statement – would it be better than nothing?  Might the immunity from the first half of the first vaccine then fight the new vaccine, rather than coexist with it?  There’s an abundance of imponderables and unknowns.  And we also know that in the real world, as soon as you allow something to be used as a fall-back scenario, people start to rely on that and make less effort to ensure the preferred outcome occurs.

The biggest imponderable and unknown is :  What happened to the earlier concept of requiring a formal testing and approval process before vaccines are allowed to be used?  Where are the Phase 1/2/3 trials, the research, results, and analysis, to support these two massive shifts in vaccine dosing regimens?  Has the public health leadership in Britain collectively lost their minds?

There is also now a slightly disquieting fear for all of us, whether we’re living in the crazy UK or elsewhere.  Can we be certain, when we have the first dose of a vaccine, that there’ll be a matching second dose of the vaccine waiting for us three (Pfizer) or four (Moderna) weeks later?   Seriously, that’s a question we have a right to insist on being answered, positively, before we bare our arm for the needle the first time.  (And, just for the record, in case anyone tells you otherwise, both vaccines can be stored for more than three or four weeks in their frozen state.)

In the US CT has reclaimed its 47th position from SD on the death list (ie got worse), and NE has moved up (improved) two spots on the case list, no longer appearing.

In the minor country list, Bahrain, which had dropped three places in the previous week, has now dropped two more and no longer appears, while Gibraltar has soared to fifth place.

In the major country list, the Czech Republic opened still further its lead on the US, while Belgium moved further behind.  The UK has moved up three places.  Of course, usual disclaimer, these results over the Christmas period have to be considered unreliable, normal reliable reporting will only recommence in this coming week.

There were some shifts of position on the death list, but the US is staying at seventh, and getting extremely close to overtaking Spain and going up to sixth place.

With the growth of countries requiring arriving visitors to show a clear and recent Covid test upon arrival, and with the continued uncertainties and delays in being tested, the promise/guarantee of being able to be tested at the airport on the day of travel seems very convenient.  The only downside is that if the test is unexpectedly positive, you’ve possibly got no time to be tested a second time (to check for an incorrect first test result), and may be facing last minute cancelation penalties and other problems.

But, on balance, we like the concept of having instant testing available at airports.  LAX is starting such a program, and you can even reserve a test slot.  Note the testing is not instant – it is the slower PCR test – and so takes three to five hours to get results back.  I’d struggle to say that the thought of a gratuitous extra few hours at an airport sounds like a fun thing these days, but no part of travel at present is anything remotely approaching fun.

Oh, one more point.  Whereas you can usually get a free test locally, LAX will charge you $125.  That includes a very generous profit margin for LAX.  Details here.

The value of a test is not conclusive, which is why countries with sensible policies still quarantine everyone upon arrival, and insist on a second, also-clear test some days later.  This is because it can take four or five days from when you get an infection to when a test can detect it, and of course, anything might happen to you between when the test was taken and when you arrive into a new country.

Maybe tests might become necessary for all flying, even on short domestic sectors.  There is a growing level of fear and incipient hysteria surrounding the presence of anyone on a plane who dares to even quietly clear their throat, or who coughs on a piece of food or sip of drink.  Here’s an article that doesn’t quite come out and say it, but you just know they’re struggling not to suggest that anyone with any ailment should not be allowed to travel “out of an abundance of caution”.  Regular readers will recall my aversion to that phrase – “out of an abundance of caution” invariably signals that the person using it realizes there is no rational reason or justification for what they’re doing or advocating, and so they fall back on this statesmanlike phrase to disguise their nonsense.

I’ve been saying right from the first news of the new more infectious strains of the virus turning up in several different countries, and the response of many panicked countries, who – doubtless “out of an abundance of caution” have stopped people from Britain traveling to their countries, that the new strain is almost certainly widely spread around the world already.  This article suggests it may have been active in the US way back in October.

Remember the showy staged photo-ops showing political leaders and senior medical officials being injected with what we were told were doses of the newly approved vaccines?  Their public injections of we-know-not-what are supposed to encourage us to be vaccinated, and we’re supposed to overlook the fact that only a few decades ago, doctors were eagerly recommending cigarette smoking as a cure for coughs and assorted other illnesses and being paid by tobacco companies to recommend their favorite brands in advertisements.

What about “real” healthcare workers.  What are they doing?  Are they also rushing to be vaccinated as quickly as possible?  Umm, not so much, it seems.

Note – I don’t say this to suggest you should not be vaccinated.  With each passing day, my comfort level with the vaccines inches up another tiny notch.  I’m merely pointing out the emptiness of the public gestures and photo-op vaccinations, and the astonishing lack of universal acceptance among the broader medical community.

There is an interesting result of the eagerness with which we’re being offered the vaccine.  It seems the more we’re encouraged to take it, the less willing large sectors of the community are to accept it.

To be clear, I’m not saying “don’t take the vaccine”.  But I am saying “don’t rush to take it unless you’re in a high risk situation.  If you can wait a while longer, why not let other people continue to test it further, first”.  But, to be clear, if you’re in a high-risk situation – either because of your age/health, and/or because of your work or living environment, then go ahead and be vaccinated. 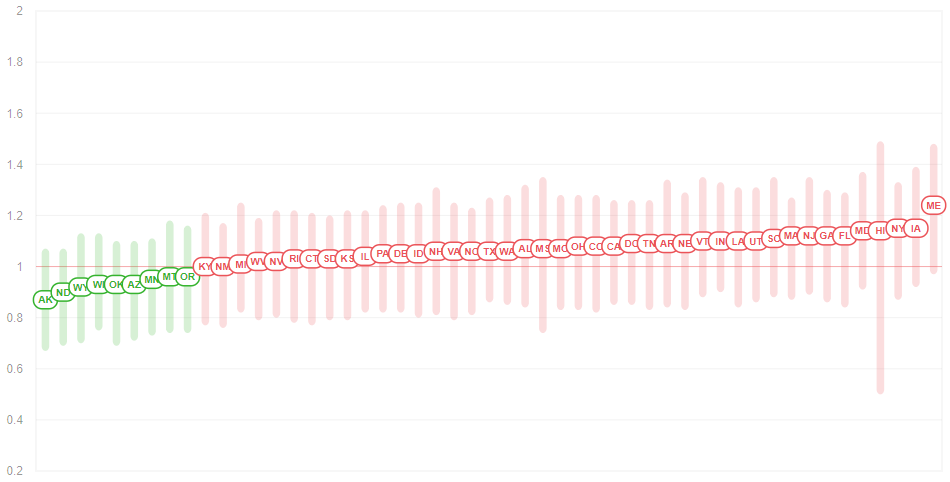 I’d been delighted in the last week to see the number of states with growing numbers of new cases every day decline, but as I’d feared, it now seems the decline may have been primarily as a result of incomplete reporting during the Christmas period.

On Thursday, there were 19 cases with declining rates of new cases, that dropped to 12 on Friday, then yesterday and today, it was down to only nine.  Maine continues to show as the state with the greatest rate of increasing cases, but I view that data as unreliable and expect to see it reduce down in the days ahead.  New York is now appearing on the worst state end of the list as well, although it is still only reporting new cases at a rate one quarter of back in March.

We continue to be beset with “bad data” every possible way.  And now there’s a claim that we might have been undercounting deaths by as much as 50%.  The claim is weak rather than strong in nature, but it again exposes the extraordinary reality where we’re not certain, to within 50%, of how many people are actually dying of the virus, in this, allegedly one of the world’s most sophisticated countries with one of the world’s absolutely best healthcare systems.