I watched an excellent video a couple of days ago, featuring one of the leading ivermectin advocates, Dr Pierre Kory.

I am always struck at the contrast between people who advocate for the use of ivermectin (or HCQ) and those who don’t.  The naysayers generally tend to be theoretical types, not front-line practitioners in daily contact with “normal” patients, and they waffle behind a screen of pseudo-professionalism and talk in nonsensical generalities of “lack of evidence”.  The supporters tend to be more hands-on people, and they enthusiastically tell you of people they know, of patients they have treated, and the huge difference the drugs have made in their lives.  I know which type of doctor I’d prefer to have treating me, no matter what my ailment might be.

In that context, I was speaking with a friend and generous supporter the other evening.  The friend was needing to change to a new GP/family doctor, and was worrying with me about how you can “interview” and choose a doctor.  I agreed with him, it being a problem I’ve wrestled with in the past, too.  Then suddenly I realized – ask the possible new doctor if they’ll prescribe ivermectin or not, and why.

We all want a doctor who seeks out the positive, and who looks for solutions, rather than one who shies away from anything out of the ordinary.  We want open-minded doctors who will listen to their patients and to other doctors, and who understand and work around the shortcomings of the formal medical establishment.  The easiest and best litmus test of that at present is to ask them their attitude to ivermectin.

Back to Pierre Kory.  He was being interviewed by another doctor, about ivermectin and other things, and at one point pulled up some slides that he didn’t know whether to laugh or cry about.  The slide that really made an impact on me, because I’d observed a similar critique elsewhere a few weeks back, was a professional medical association saying that it doesn’t recommend ivermectin, because the published results are too positive to be believable!

That is very different an objection from the typical objection – “there is no proof…..”, but it leaves one wondering – if half the doctors say there’s no proof and the other half say the proof is too positive to be believable, how can ivermectin ever hope to be approved?  When doctors refuse to believe what is printed in referred journals because the results are too strong, what hope do we ever have of getting sense into their thick skulls and closed minds?

Of course, Dr Kory had an excellent rebuttal to the “too positive” complaint.  There’s a way of establishing if there is or is not “publication bias”, and he showed how there was none.

Also in that section of the video were other fascinating aspects of the establishment’s extraordinary negativity.  Here’s a link to where that part of his presentation occurred.  If you like it, why not go back to the beginning and watch more. 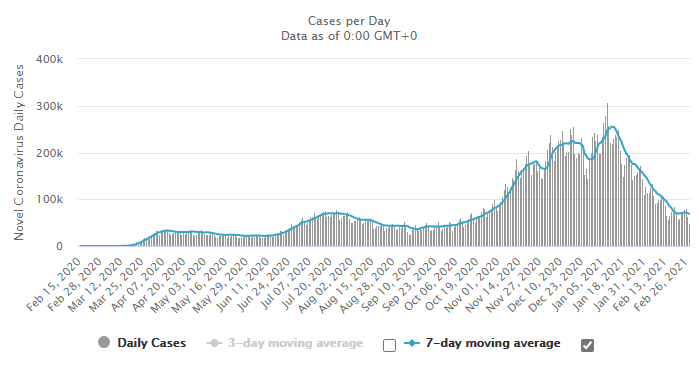 The puzzlement of US new case numbers remains.  Last week saw four days in a row of rising cases again (compared to the same day the previous week), then Friday, Saturday and Sunday had gently falling numbers again.  The blue average line shows how the steep drop flattened out, but is now starting to go down again.

I’d analyzed a Wall St Journal Op-Ed article last Sunday pointing out six problems with its “explanation” of why case numbers were falling.  The basic gist of the article was that cases were falling because we’d reached herd immunity, a point I disagreed with.  It is nice to see a CDC scientist now agreeing with me, but his statement that we are “nowhere close” to reaching herd immunity is frustrating in its vagueness.

What level of immunity does the scientist believe we have at present, and what level does he believe we need for herd immunity to kick in?  Surely, as a scientist, he’d realize that “nowhere close” is a totally meaningless statement.  Or does he not actually know either of these two numbers?

Certainly, there has always been an eagerness to claim we’ve reached herd immunity, because it has appeal as a “do nothing solution” – something that just passively happens, all by itself.  A key part of the eagerness to claim herd immunity as our savior is the untested assumption that having been infected once means we’d not get infected a second time.

That has never been a valid claim, and with each passing day/week/month, the number of people having a verified second infection has been growing.  So the herd-immunity proponents have modified their claim to now saying “Oh yes, well, maybe you might get a second infection, but don’t worry, you’ll have partial immunity and a second infection will be very mild, not nearly as bad as the first”.

Unfortunately, and even though it too is a claim we all desperately would love to believe, this has never been a valid claim either.  As I’ve pointed out before, one of the first confirmed reinfection cases ended up with the person dying the second time they were infected, and here now is an article reporting on more people having worse experiences the second time around.

Talking about experts and their mistakes, remember the WHO “fact-finding” mission that went to China and proudly announced they’d found no evidence of the virus originating, either in Wuhan’s germ-warfare labs or in China at all, with the disclaimer to that announcement being the reason they’d not found any evidence might be because they’d actually, errrr, not looked for any such evidence?

I wonder what they’d make of this article, about people who dared to reveal details of the virus in its early stages and who disappeared as a result of their disclosures?

No changes in the US case rate tables, but in the US death rate tables, MA and RI swapped places, and we might be getting close to a couple of other place swaps too.

Aruba and Lithuania swapped places in the minor country list.

There were no position changes in the major country list, although the only reason the current level of raging activity in the Czech Republic didn’t see it move up a place is because the Czech Republic is already way out ahead of second place USA.

The death list saw the Czech Republic ascend to the top (worst) position, allowing Belgium to drop gratefully down to second place after a very long time at the top.

When did you last come down with a cough or cold, or pretty much any type of infectious ailment at all?  I know, for my daughter and me, we’ve not suffered a single sniffle or anything at all in the last twelve months, compared to a usual year which sees some number of coughs/colds/sore throats/etc.  Chances are, you are similarly enjoying extended freedom from such things, too.

The highest profile example of this are the statistics on each year’s ‘flu.  Have a look at these three ‘flu heat maps taken for this year and the same time in the last two years. 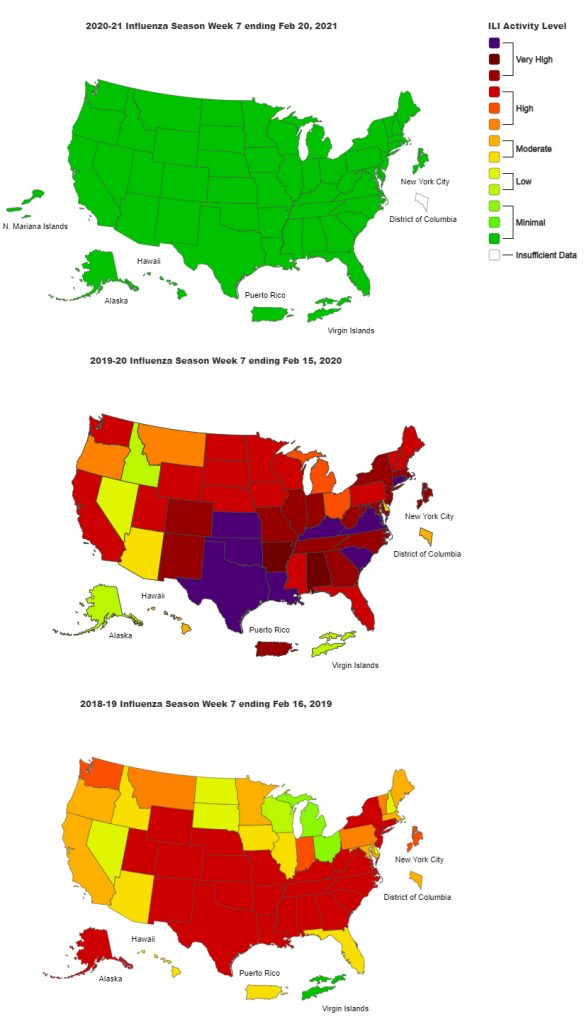 There are almost no cases of ‘flu this year compared to the last two years.  You can see the data for many different years and weeks here.

The first statement is utterly wrong – the coronavirus is a totally different type of virus to the ‘flu virus.  To say it is a new type of ‘flu virus is a bit like saying a lion is a new type of bear – both are mammals and both could kill you, but otherwise, they couldn’t be more different.

There is probably an element of truth to the second claim, although unlikely to be a very significant part of it.

The actual truth is hinted by the fact of lower incidences of coughs and colds too, although not so exactly recorded by data, because most regular coughs and colds are never reported to the CDC.  Our social-distancing, mask-wearing, and hand-washing are all reducing our exposure/risk to infectious diseases of all types.

The next time someone tells you that wearing a mask or social distancing conveys no benefit, point this out to them. 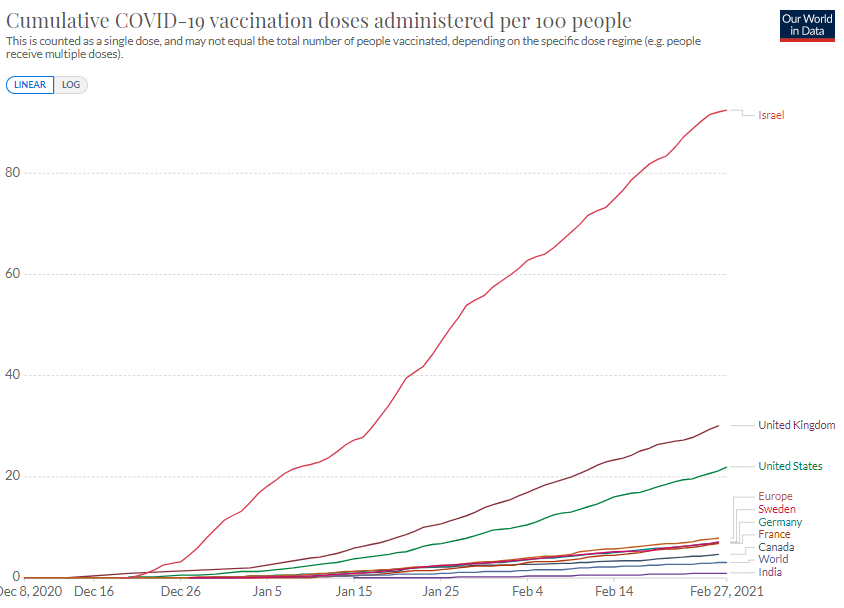 Also worthy of note is how the UK is leaving its former EU partners so far behind, as we are in turn outperforming our friends in Canada.

It is surprising to see that although Israel has done an extraordinary job of vaccinating so many people so quickly, it has started to experience fresh growth in daily new cases. 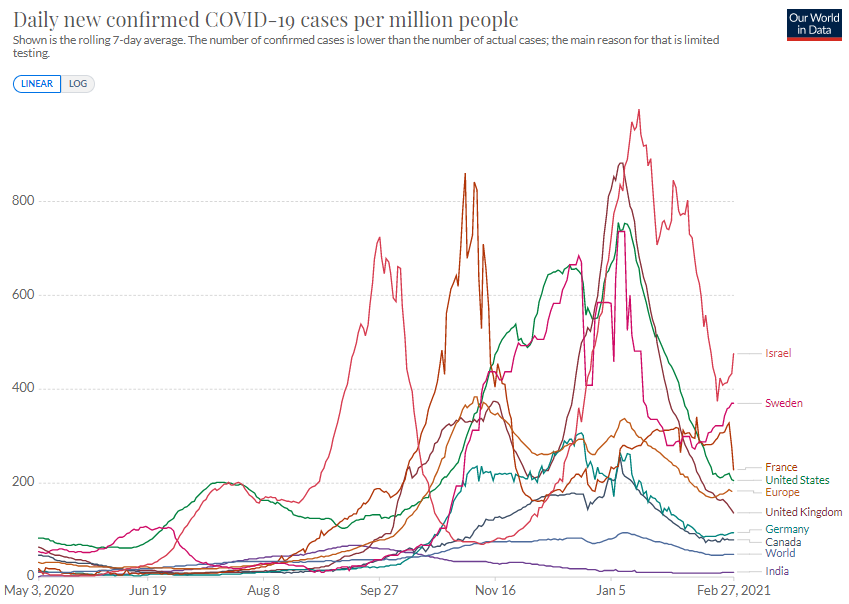 This is surprising, because Israel has both had many virus cases in the last year (comparable to the US) and also its very high vaccination rate, but all this year (ie 2021) its case rate has been higher than the US.