Many sources are claiming today is the one year anniversary of the start of the Covid crisis, for example, this article.

That is a strange choice of date, and seems to be based on WHO finally and grudgingly admitting the reality of Covid and no longer pretending it didn’t exist.  But 11 March was far from Day One with Patient Zero.  There were 125 countries having confirmed Covid outbreaks already by then, and it is to WHO’s shame that it took until 11 March 2020 to agree it was a pandemic, something it should have said very much sooner.

On 11 February, for example, there were already 28 countries with outbreaks, and President Trump declared a public health emergency on 31 January.

Would an earlier declaration by WHO have made any difference?  Actually, probably not.  No part of the global response to Covid shows any signs of any type of coordination at all, and even the tightly united EU has struggled to create and keep any sort of consistent response to the virus within its member nations.

But, whatever the date, (un)happy birthday to the virus.  And, of course, like all other one year olds, the virus has grown and changed a great deal over that year, with the new thing being all the variants and their greater lethality and infectiousness that have been cropping up over the last few months – things the “experts” had inexplicably told us not to worry about.

For the record, in case anyone is counting, this is the 184th article I’ve written about the virus.  Say an average of 2500 words per article, plus my 480 page/135,000 word book, and I’ve written almost exactly 600,000 words on the subject, in little more than a year.  I’m hoping to be able to soon reduce the pace of coverage, but surprisingly/dismayingly, the need to correct and clarify misinformation remains as pressing today as it was a year ago.

Eli Lilly have developed a new anti-viral drug that reduces the risk of needing to be hospitalized with a Covid infection by 87%.  This claim is based on their in-house trial, with 511 test subjects, and it was deemed sufficient for the US – even prior to the release of the trial results – to spend $210 million to buy 100,000 doses of the drug.  That’s a cost of $2,100 per dose.

Compare that to ivermectin.  There have been 45 independent and positive trials of ivermectin, involving 15,451 test subjects, a demonstrated improvement of 82% in early treatment trials, and a cost of $2.10 per dose.  Similar effectiveness, 30 times more test subjects, 45 times more trials, a known safe drug rather than a brand new one, and one thousandth of the cost.  But the FDA continues to claim that not enough is known to support ivermectin use.

Astonishingly, the FDA is becoming more negative about ivermectin.  After taking a baby-sized step towards expressing positivity, it has now pulled back and come up with a series of nonsense statements to support cautioning against ivermectin.

Here’s an interesting new Covid treatment – a nasal spray being developed in Israel.  Brazil is keen to use it, and certainly it seems like a great idea, although I’ve no idea what it costs.  Most of all, though – how does it compare to ivermectin?

There has long been a groundswell of support for Vitamin D as a way to reduce one’s vulnerability to Covid.  It too is far from settled science, although, unlike ivermectin and hydroxychloroquine, Vitamin D can be bought over the counter without a prescription, often even in a local grocery store.  This article points to research in favor of Vitamin D use, this article points to a new study that suggests little or no benefit from Vitamin D.

Exactly the same as for IVM and HCQ, my feeling is there’s no downside to taking Vitamin D.  It is safe and inexpensive, and possibly might help and almost surely would not hurt.

No changes in positions at all in the US tables.  Montenegro and Gibraltar swapped places in the minor country list.

In the major country list, Spain dropped two places, and Poland replaced Argentina at the bottom of the list.  Sadly, the US moved up one position in the death list, barely passing Portugal, and is now in 5th place.

One of the reasons most people believe the virus originated in one of China’s two different Wuhan bio-labs is because such an event had been anticipated, feared, and warned about for years.  Here’s an article pointing to concerns being expressed back in 2018.

The WHO whitewash seems to have overlooked these points.  We wonder why (well, actually, no, we don’t wonder at all.  Every part of the WHO carefully staged exoneration of China was predictable and unsurprising).

There’s no reason why quarantining needs to be an unpleasant experience, or so the Thais believe.  They’re going to give (perhaps better to say, “sell to”) foreign visitors the option to quarantine on a yacht.  Yes, you’ll be allowed to sun yourself on deck and go for swims in the water.

The strange thing about this new policy, as cited in this article, is that non-vaccinated visitors will no longer need to spend 14 days in quarantine.  Now it will be only ten days.  The reason is due to “the strength of herd immunity nearing optimum numbers”.

That is an utter nonsense statement.  Herd immunity is not a factor anywhere, and most of all, not in Thailand.  Thailand has had a mere 380 cases per million of population – 0.038% of the population have had the virus.  (Here in the US, we’re at 9% – 240 times more than in Thailand.)

Maybe the reason for the statement is due to vaccinations?  Ummm – no.  Thailand has had almost zero people vaccinated.

Assuming the previously infected 0.038% of people have gained “herd immunity” (they probably haven’t) that contrasts with a need for 70% or more of the population to be immune for herd immunity to start to become impactful.  So, “nearing optimum numbers”?  Thailand is about 1/2000th of the way to that point.

This scare headline threatens a new Covid variant from the UK is up to 100% more deadly.  What it should actually say is that it is probably about 64% more deadly.  That’s still a bad thing, but not nearly as bad as 100%.

Good news.  The CDC has finally decided that people who have been fully vaccinated can now gather with each other and not need to wear masks.

We’re not sure what took them so long to come up with this seemingly obvious finding.

This interesting article suggests that maybe a regular ‘flu vaccine might have some spill-over benefit and reduce your susceptibility to the Covid virus, too.

The two types of virus are very different, so that is a surprise, but if it is true, it is a good surprise rather than a bad one.

I continue to be so very thankful the FDA has not approved the AstraZeneca vaccine.  Here’s an article about how Denmark and Iceland have stopped using it due to concerns about the possible formation of blood clots in people who had received the vaccine. 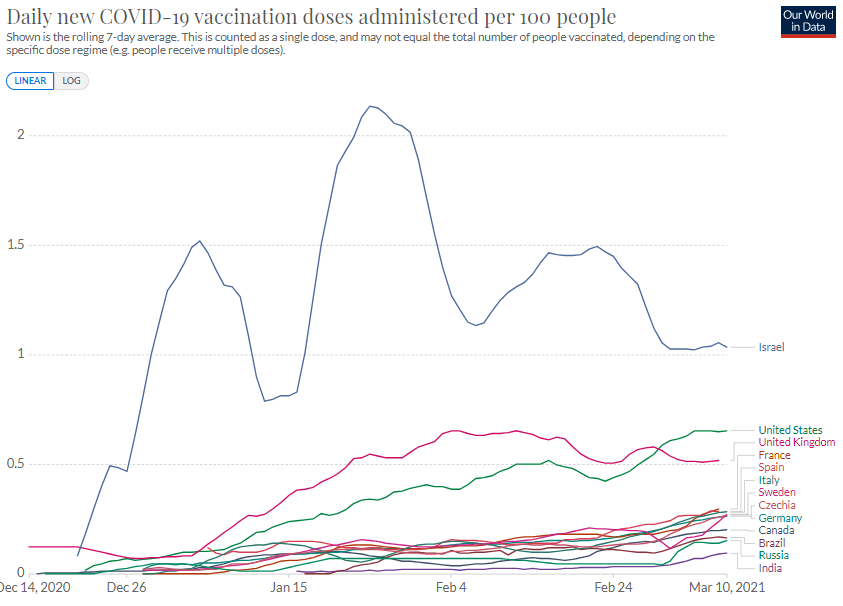 The US continues to do a splendid job vaccinating people.  Israel’s numbers are starting to drop, because it is now vaccinating “the other half” of the population – harder to reach people and those who are reluctant to be vaccinated.

As you’ve surely noticed yourself, people are moving about more, and many of the earlier rules and restrictions are being lessened or lifted entirely.  Astonishingly, the new infection rate for Covid is staying low in the US and still dropping, although I continue to wonder when that will stop.

I’ve news for him.  That’s neither a plateau nor a baseline.  That’s a steadily reducing slope.

Disneyland and other amusement parks can reopen in California on 1 April, but will be limited to 15% of their capacity.  But does that mean there’ll be no lines?  Or does it mean not all rides will be open, and those that are open won’t be fully staffed for maximum throughput?  My fear is there will still be plenty of lines to wait in.

My sense is, whether you’re flying to Disneyland or somewhere else, domestically, now is a good time to travel, if you’ve been vaccinated and can find a bargain fare.  Internationally?  I’d hold off on that a while longer.