The US, UK, and Europe seem to be in the grip of two opposing forces.  On the one side is a race to vaccinate as much of the population as quickly as possible in the hope of causing new Covid case counts to drop.  On the other side is a race to reopen as much of each country as possible, in a different race – the race to stop inflicting enormous financial damage on so many businesses, and social “harm” on us all, deprived of much of what we used to enjoy in our lives.

Can we vaccinate fast enough to counter the increased risks associated with abandoning social distancing restrictions?  And what about the added severity of new more infectious (and more fatal) virus strains?

The ultimate answer to these questions remains very unclear.  Both the US and UK have stalled with new case counts hovering around the 56,000 and 5,500 levels, respectively, and in the EU, the new case rate has grown about 50% in the last month. 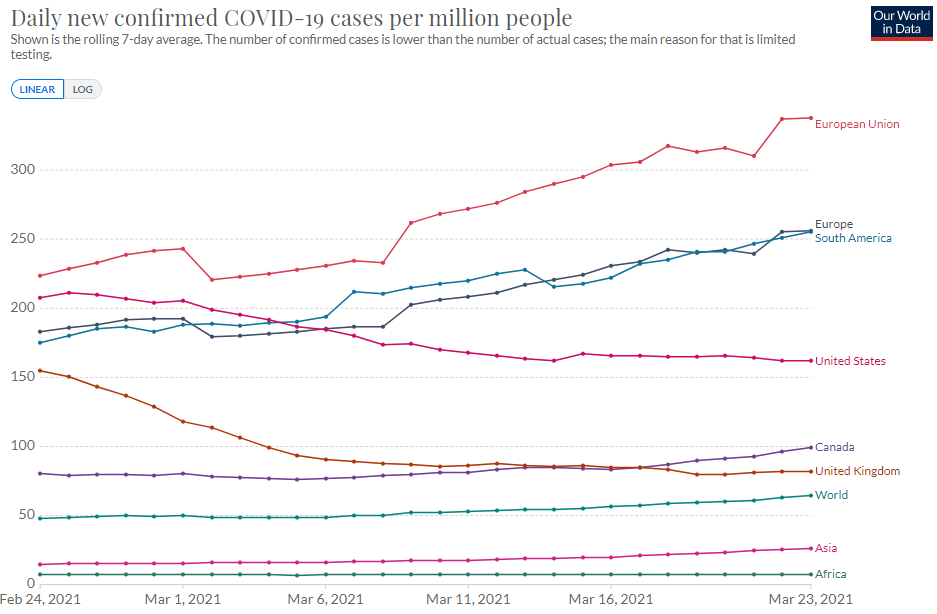 As you can see, most of the world is seeing some growth in daily new cases being reported, it is only the US and UK that have strong reductions, and our reductions have more or less petered out to the point where numbers might be starting to rise again.

The good news in the US is that we’ll soon have a surplus of vaccines – more doses of vaccine than people wanting them.  The UK is feeling slightly more anxious about its vaccine supply at present due to the EU’s threats to restrict the export of vaccine doses to other countries.  The EU is starting to feel defensive about its own disappointing vaccination rate and climbing new case rate.

Not so here.  Sometime in the next few months, we’ll reach the point in the US where everyone wanting to be vaccinated will have been vaccinated.  But that’s not the same as saying the virus will be defeated, and new cases will disappear.  Currently, we are being told it will take about an 80% vaccination rate to achieve some type of herd immunity, but only 69% of adults plan to be vaccinated (and who only knows about what will happen with children).

Two things worth keeping in mind about vaccines.  The first is that you don’t instantly get full protection the minute you get the second of your two shots (or your only shot if taking the J&J single shot vaccine).  Full protection takes about two weeks to build up after your second shot.

The second is that the vaccines don’t guarantee you anything.  Sure, they claim to be 95% effective at helping you avoid a severe infection or death, but that still means one in every twenty people aren’t protected.  Even if you are in the 95%, you still might get a mild dose of the vaccine, and you still might pass it on to other people.

RI and MA swapped places in the US death list.

Gibraltar, claiming a 100% vaccination rate among adults, has added two new cases to its total (now 4272 cases).  I’ve not been able to determine whether the new cases are from previously vaccinated residents, or visitors, or unvaccinated residents, but have asked the Gibraltar Government for more information.  The country has dropped one place on the minor country list.

Many people were predicting a winter peak in virus cases.  This didn’t really happen, although there were some valid reasons for expecting at least some type of seasonal rise.  A surprising possible explanation has now been put forward – if you already have a cold, the cold virus displaces the Covid virus.

Mind you, if you’re like me, you probably had no colds this winter, either.  Our social distancing and mask wearing and hand washing has done a great job of protecting us from all types of respiratory viruses.  So it is only a partial explanation.

We’ve been talking a lot about virus mutations over the last few months.  You probably already understand that the more cases out there, the more chances there are for the virus to mutate.  It is like rolling a pair of dice – the  more times you roll them, the more often you get a double-six.

Here is an article that cites a fascinating statistic about the virus mutation rate – it mutates, on average, once for every four people it passes through.  There’s not a direct link between people it passes through and mutations (one person who had an active infection for an extended period had the virus mutate within him several times), but on average, it is acceptable to equate the one measure with the other outcome.

Talking about mutations, India is now claiming to have uncovered a “double mutant” form of the virus.  That’s a scary sounding phrase, isn’t it, but it is meaningless in scientific terms.  Just about every virus specimen out there today has already mutated way more than two times.

One of the obscured “costs” of the virus is that a significant number of people are deferring other medical treatments for fear of catching the virus in a hospital or clinic.  This article considers the issue.

Another obscured “cost”?  Over 60% of US adults are reporting an undesired (and probably undesirable) weight gain since the start of the pandemic.

Pfizer are boasting of progress in developing a new pill to help treat the virus, and their PR department is succeeding in getting compliant media outlets to write up positive pieces about this.

Here’s a question to every media outlet that has written a positive piece about this early stage experimental new drug :  What have you written about existing and proven therapies such as ivermectin and hydroxychloroquine?  Why have you not even asked Pfizer what their drug would cost?

Remember the desperate struggle to find hand sanitizer, a year ago?  And the subsequent reports of hand sanitizer containing toxic methanol instead of safe ethanol and/or propanol?

It now turns out, a year later, that some of the hand sanitizers also contain benzene, a known carcinogen.  I can’t start to guess how or why that happened – making hand sanitizer is actually very easy, as is evidenced by the vast number of articles online about how to make it, and the way distilleries converted from making alcohol (to drink) to instead making alcohol (for hand sanitizers).

The AstraZeneca vaccine will perhaps (and hopefully) be written up as a case study to illustrate many of the unforced errors made by both the company and by governmental regulators when it comes to trialing and overseeing a vaccine.

The confusing nature of the original trials, and the apparent errors in dosing levels, and also delays between first and second shots, makes the claims of the vaccine’s efficacy hard to understand and match against the inconsistent data used to support it.

The US required a more extensive trial before being prepared to evaluate it for approval as an emergency experimental virus.  That trial has now been completed, and in the usual “seeking approval via the PR department” process that big pharma is so adept at, AstraZeneca crowed about the demonstrated success of the vaccine earlier this week.

But, when asked for specific data and details to support their claims, the company refused to provide them.  Why were the details and evidence supporting their claims withheld?

At about the same time, independent researchers were observing disappointing results from the AZ vaccine against the South African virus variant.

Even more astonishingly, it quickly transpired that the data AstraZeneca was sharing with the US health regulators was inappropriate and out of date.

This article looks at some more of their missteps.

AstraZeneca has also got caught up in the controversy about the EU’s allocation of vaccine doses, including the apparent “discovery” of 29 million doses of its vaccine in an Italian warehouse and some ambiguity about who/what/where was going to receive them.

One of the needless controversies about the vaccines have been the incidence of side effects.  With the exception of severe hospitalization or death, there’s no vaccine side effect that is likely to be anywhere near as bad as the virus itself.  We shouldn’t be letting fear of trivial side effects stop us from being vaccinated.

But if this does concern you, this article lists the three groups of people most likely to experience side effects.

And if you’re still not sure, here’s an offer that might be enough to get you rolling up your sleeve and baring your arm for the jab.

The mask debate continues to rage on.  One mask?  Two?  None at all?  And now, to add still another element of angst, here’s a new product that totally fails to excite us. 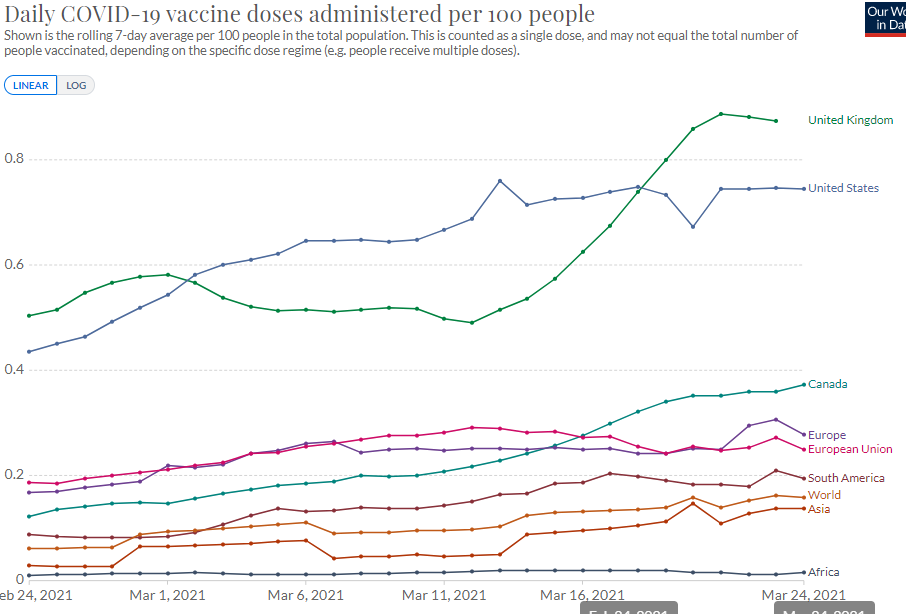 The UK continues its excellent job of vaccinating its people, with the US not far behind.  Of interest is to note the rising success of Canada, now in third position on this chart.

Europe however continues to underachieve, apparently due to a lack of vaccine doses.  They need to urgently get this sorted out, because they are experiencing increasing rates of new virus cases.

Two associations – the American Society of Travel Agents (ASTA) and the Cruise Line Industry Association (CLIA) have been calling for a liberalization of restrictions on cruises.  We’d find their representations slightly more compelling if it wasn’t for the obvious vested interest they have in the position they advocate.

On the other hand, we’re surprised that the CDC’s crystal ball is shining so clearly that they are restricting all cruises all the way until 1 November.  Does the CDC not know Joe Biden expects the entire country to be vaccinated well before then?

Most of all, what about allowing cruises (and travel in general) for people who have been vaccinated?  That really seems like a great measure – not a 100% solution, but a much better solution than a blanket ban.

Perhaps it is just institutional inertia and a slowness to recognize the speed at which the US and other countries are building up large numbers of vaccinated people.  But some countries and some organizations are coming up with special exemptions for vaccinated people.

One such example is Rutgers University, which is requiring all students attending the fall semester to be vaccinated.  That’s a fairly aggressive requirement as it is not clear that teenagers will have been allowed access to the vaccine by that time in all US states.

It is interesting to see the range of products that are going through virus related shortages.  The latest product shortage to be blamed on the virus is computer chips.

Meanwhile, one of the first ever products (guess) to become scarce may be about to become scarce again.  All I can say is that my supply still remains happily most adequate, notwithstanding no purchases for an entire year!

We saw the headline on this Reuters article – “U.S. COVID response could have avoided hundreds of thousands of deaths” and eagerly clicked to read it, only to find that the article and its analysis/research failed to mention hydroxychloroquine or ivermectin at all.

The conspiracy of silence, when it comes to HCQ and IVM, continues.

Talking about silence, I still sometimes get told I should shut up, because I’m not a doctor and therefore know nothing about anything.  But who would you prefer to get your analysis from – me?  Or this doctor?