Life is strange at present.  On the one hand, the vaccine is becoming more and more widely available, at least in the US, and daily new infection rates have started to gently drift down again in the last few days – nowhere like the plummet in numbers in January/February, but any type of decline is still to be greatly welcomed.  So, good news.

This is encouraging some states, most notably Texas and Mississippi, but also others too, to loosen up or completely cancel their restrictions.  Other states, while not going quite so far, are hoping for good things very soon now (for example, Colorado), and Florida is repeating itself with public anguish over how to handle this year’s spring break crowds, just like it did last year.

Loosening the previous restrictions now is absolutely wrong.  The virus is still abundantly present in all states, and indeed, with the growing prevalence of more infectious and more deadly strains, the need for caution now is greater, not less, than it was at any previous time in the last twelve months.

In this analogy, the slope represents the underlying presence of the virus.  The brakes represent preventative measures such as masks and social distancing.  And the car’s speed represents the rate of new virus cases.

Just as how, as long as the car is on the slope, you need to keep your foot on the brake pedal to slow the car down and stop it, and keep your foot on the brake, even after the car has stopped, so too do we need to keep our preventative measures in place as long as the virus is out there and we’re not all vaccinated with a vaccine that will be effective against the growing range of virus threats, some of which are increasingly showing themselves to be less controlled by the vaccines.

This is not rocket science.  It is very basic and simple epidemiology and public health, and the governors in states such as Texas and Mississippi are getting it dangerously wrong.

Meanwhile, although some people are daring to hope the light at the end of the tunnel is indeed a light (and I largely include myself in that optimistic group), other people are appreciating that it is still quite some distance between we get there.  Here’s a reasonably sensible commentary that is rather depressing – our lives may be forever under a Covid cloud, with continued need for new vaccinations for new strains, and a requirement for caution prior to each new vaccine’s release to match each new strain, for some years to follow.

Meanwhile, “scientists” who should know better continue to come up with crazy untested ideas about mixing and matching vaccines.  Maybe there’s some sense in their speculation, but the craziness is their eagerness to adopt untested, untrialed, unproven, unknown, strategies – something that is alarming and depressing.

Talking about scientists who should know better, perhaps a quick update on ivermectin is called for.  Astonishingly, the National Institutes of Health is refusing to disclose who it is among their experts that is/are arguing against ivermectin, or why – they claim they are “unable” to comply with a Freedom of Information request to explain why they are not more positive on the drug.

It is bad enough they’re not singing ivermectin’s praises at the top of their voice, but to refuse to disclose who is responsible for their negativity and why, is perplexing.  Their awkward silence implies guilt and their own knowledge that their decision was not made on a rational and supportable basis.

Meanwhile, Peru has unwittingly provided some mass-data that seems overwhelmingly persuasive in support of ivermectin use.  In May last year, the country approved ivermectin as a Covid treatment.  This brought about a 14-fold reduction in national excess deaths.  That seems to argue very strongly in favor of IVM use.

But wait, there’s more.  Inexplicably, after a new President was elected, the country changed its national guidance, and sharply restricted IVM availability and use.  The outcome?  Excess death rates increased 13-fold.

One more thing about scientists who should know better.  According to this WSJ article, the risible WHO investigation into the Chinese origins of the virus is not only being criticized by independent scientists (and me), but the eventual release of formal findings are subject to the Chinese government’s prior approval.

Is it possible to come up with a more guaranteed-to-fail approach to an “independent enquiry”.  That’s a bit like trying someone in a jury trial, and not only having the defendant control what evidence the prosecution can show the court, but also requiring the jury’s verdict to be approved by the defendant prior to being announced.

There were no changes to either the US case rate or death rate rankings.

There were no changes in the minor country list.  In the major country list, Sweden and Belgium swapped places, as did Belgium and the Czech Rep on the death rate list.

I continue to be puzzled by the mysterious variations in how Covid affects different countries.  This week sees a new report that identifies one factor that might be a contributor to the strange differences in Covid impact – the study shows that Covid death rates go as much as ten times higher in countries with larger percentages of overweight adults.

If that’s not enough encouragement to get you motivated to working off some of that accumulated lock-down extra weight that many of us have gained, there’s more bad news as well.  Another study has appeared, telling us the Pfizer vaccine (and probably, therefore, the Moderna one too) may be less effective for overweight people.

Here’s an interesting and potentially useful way of detecting Covid infections – by sampling/testing the air for virus particles.

On the basis of it being “an ill wind that blows no good” it is astonishing to note some of the leaps forward in science we are making as part of our overall response to the virus.  Whether it be new forms of detecting viruses, an entirely new approach to developing vaccines, or uncovering anti-viral properties in everyday medicines, our knowledge of and ability to respond to many forms of viral infection are being greatly boosted.

The good news is the Johnson & Johnson vaccine has been approved in the US, and is already being distributed and given to some lucky recipients.

So, now we have three different vaccines to choose from, which is the best?  The answer to that is a resounding “don’t know” – and it isn’t only me who doesn’t know.  No-one does.  The supporting data is so appallingly thin for all three of the vaccines that it is almost impossible, with any measure of statistical significance, to compare and rate the three vaccines, a problem made worse by the astonishing fact that the three vaccine trials weren’t consistent between themselves in terms of methodologies and common end-points to determine success or failure.

Plus, it is no longer a simple case of measuring (in some mysterious way) the effectiveness of the vaccine against “the virus”.  Now we have many different variants of the virus, some more dangerous than others, and each variant with a different degree of vulnerability to each vaccine.  This generates hard to answer questions such as what is more important – a vaccine’s success against the main present variant, or its effectiveness against a less common but more dangerous new variant?

So, which is the best vaccine?  That’s a bit like competing to set a new world record for the 100 yard dash, but with the actual length of the run being unspecified, not even a restriction on whether the run is on the level or downhill or up a slope, with or without a head or tail wind, bare-footed, in gumboots, or in running shoes, and so on, and all being timed by looking at the town clock with only hour and minute hands.

One of these three vaccines is a better choice, for each of us, than the other two.  But who knows which of the three is that better choice?  You don’t.  I don’t.  Your doctor doesn’t.  No-one does.

Don’t you find it astonishing that competing vaccines, seeking formal FDA approval, don’t have to be tested the same way as each other?

If you’re going to get vaccinated, don’t you want to get the very best vaccine with the most comprehensive protection?  Don’t you think it fair to be given the data to make that informed choice?

I’d mentioned, a week or so back, that Canada was struggling to catch up with the rest of the world after ill-advisedly contracting for vaccines from only one company, and a Chinese one at that.  The company’s vaccine program was cancelled, leaving Canada with nothing.

Unsurprisingly, Canada’s desperation is pushing it in unfortunate directions, and it is now scrambling to secure stocks of the AstraZeneca vaccine – the one with the sketchiest credentials and the one which other desperate-for-vaccine countries are refusing to approve or accept.

It is a shame Canada’s public health authorities didn’t see this as a reason to advocate for ivermectin.  Or perhaps to consider an entirely different vaccine – this article interestingly suggests some benefits from the MMR vaccine.

The distribution of the vaccine is becoming a classic case of people seeing their glass as half-empty.  Some people seem to think the entire world should have magically become instantly and completely vaccinated, all on the same day, and bemoan the fact that the pharmaceutical companies have finite rather than infinite manufacturing capacity.  They complain about the “slowness” of deploying vaccines rather than delighting in the rapidity with which countries are getting vaccines into people’s arms.

Here’s an article giving an interesting insight into the Pfizer process, but you can sense the disapproval of the writer all the way through. 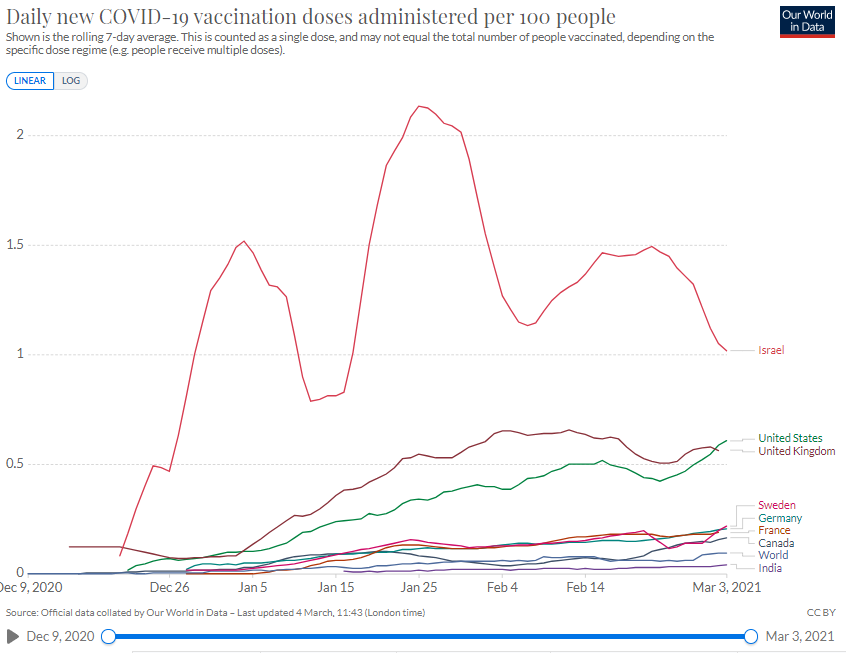 The US is now the second best country in the world in terms of rate of vaccination. 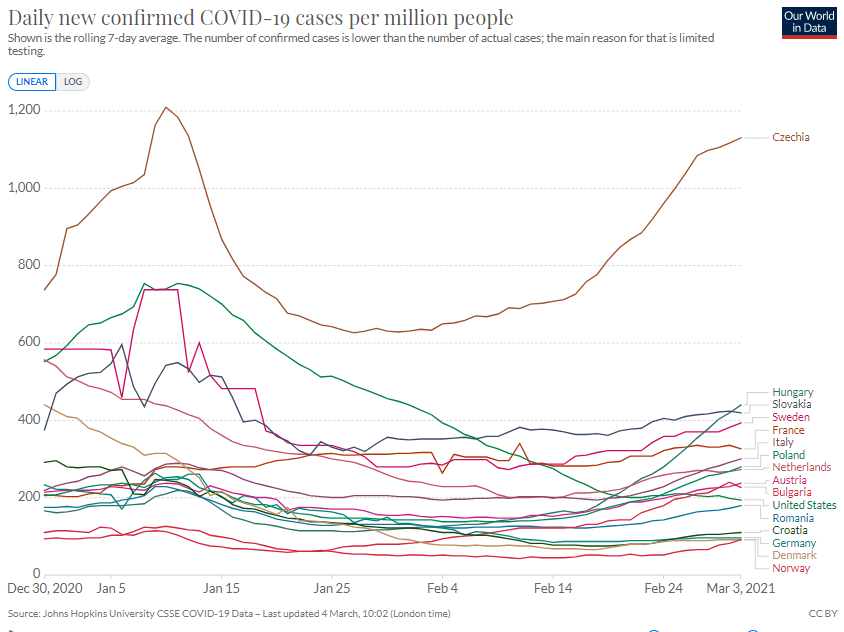 While our virus new case rate is continuing to slowly drop, much of Europe is experiencing another rise in new cases.  It is unclear why this is.