The presence and growing availability of vaccines, at least here in the US, have blinded a lot of people to how the virus remains a problem.  Plenty of Americans are still getting infected, every day, and plenty of Americans are still dying, every day.  Most alarming is that new case numbers are staying more or less steady or possibly even inching up slightly in the US, and in the rest of the world, they are growing much more steeply. 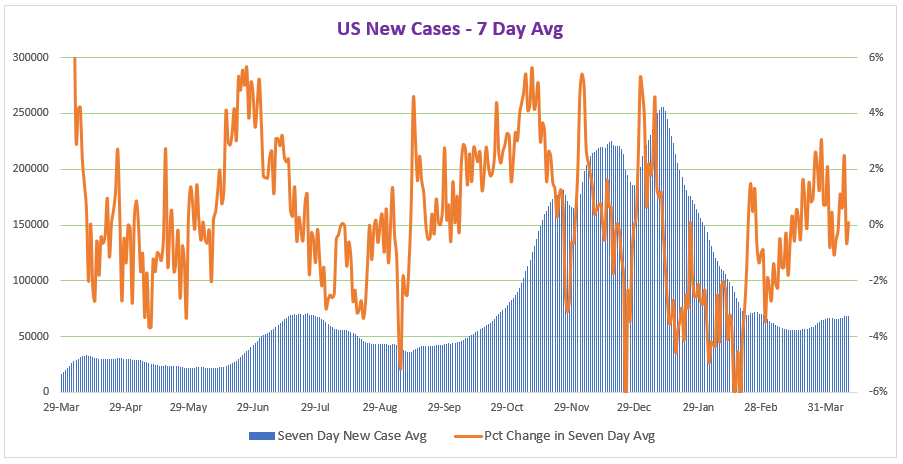 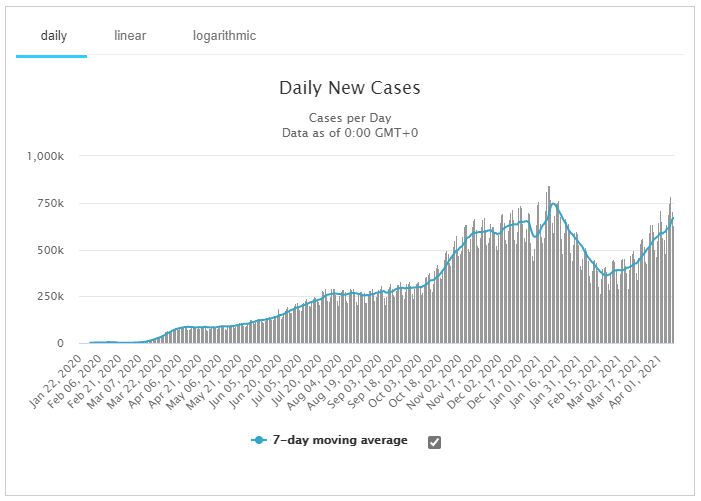 As you can see, the world count is rising much more quickly and it seems possible we meet reach and even exceed the previous maximum rate.

Part of the reason for this is the growing number of cases with the new virus variations – variations that are much more infectious and sometimes much more deadly, too.

There has been a lot of uncertainty about how effective the vaccines are against the new virus variants.  Some variants are thought to be controlled, to a greater or lesser extent, by some of the vaccines.  Pfizer had confidently told us that its studies showed that its vaccine was 100% effective against the South African variant, but now a new report from Israel, where almost the entire country has been vaccinated by the Pfizer vaccine, contradicts that claim.

Unfortunately the report doesn’t tell us if the vaccinated people who are still getting infected are getting merely a mild case, or if they are becoming seriously unwell, with of course the hope being the vaccine is at least “softening” the infection experience.

Call me a cynic, but I urge you to consider claims made by the pharmaceutical companies with caution rather than absolute trust.  They do have a vested interest, and this is not the first time  there has been a significant contradiction between what a vaccine maker claims and what the real world shows.

The point of all of this is that we still need to backstop our vaccination programs – and, in the case of you, yourself, your vaccination – you need to keep aware of your treatment options so that if you do still get a case of the virus, you’re able to ensure it is mild rather than major, and to keep away from the hospital, the dreaded ventilator, and most of all, the morgue.

Which brings me to my second headline point.  US “standard of care” treatment options for infected people continue to be nothing more than “go home, keep away from other people, and hope it doesn’t get worse”.  That is beyond pathetic, and utterly wrong.

A group of doctors in Texas “took the law into their own hands” – or, more simply, decided to be real doctors and dispense medicine rather than platitudes.  Their treatment programs reduced hospitalizations by 87.6% and death by 74.9%.

Wouldn’t you like to know what they were recommending and prescribing, and to have some of that at the ready, too, just in case it is needed?  More details here.

It is a national tragedy that such astonishingly positive results are being ignored (or even criticized!) rather than embraced.

There were no changes in US rankings this week.

In the minor country list, St Barth debuted, not at 10th place, but immediately all the way up to 7th place.  Heavily vaccinated Israel is dropping down, and will possibly have disappeared off the list within the next week.

In the major country list, Brazil – a nation much written about as having case rates worse than anywhere else in the world, is now experiencing case rates lower than France and Poland (and other countries too).  The UK continues to drift down the list and is presently at 11th place.

Brazil’s death rate has however caused it to move up the death list – death rates always lag behind case rates.  Depending on when its death rate starts to ease back, it could reach up and get above the US on the list by next Sunday.  The UK continues to enjoy massively reduced death rates, and dropped to fourth place.

Reader Peter sent in a fascinating article about how some “normal and ordinary” antihistamines may help reduce the effects of the virus.  The article mentions two familiar medicines that can be found on the shelves of many supermarkets, even at Costco, as well as at drug stores – Benadryl (aka diphenhydramine) and Pepcid (aka famotidine).  You might even have one or the other at home already, and if you’re like me, you’ll make sure you have a supply of both.  Benadryl in particular seems to be well suited as a prophylactic.

Note how Benadryl is most beneficial at greater than regular strengths.

Talking about bad vaccines, is anyone surprised to learn that the Chinese vaccines may not be very effective.  The only surprising part of that statement is the Chinese themselves admitted that their vaccines aren’t working very well. 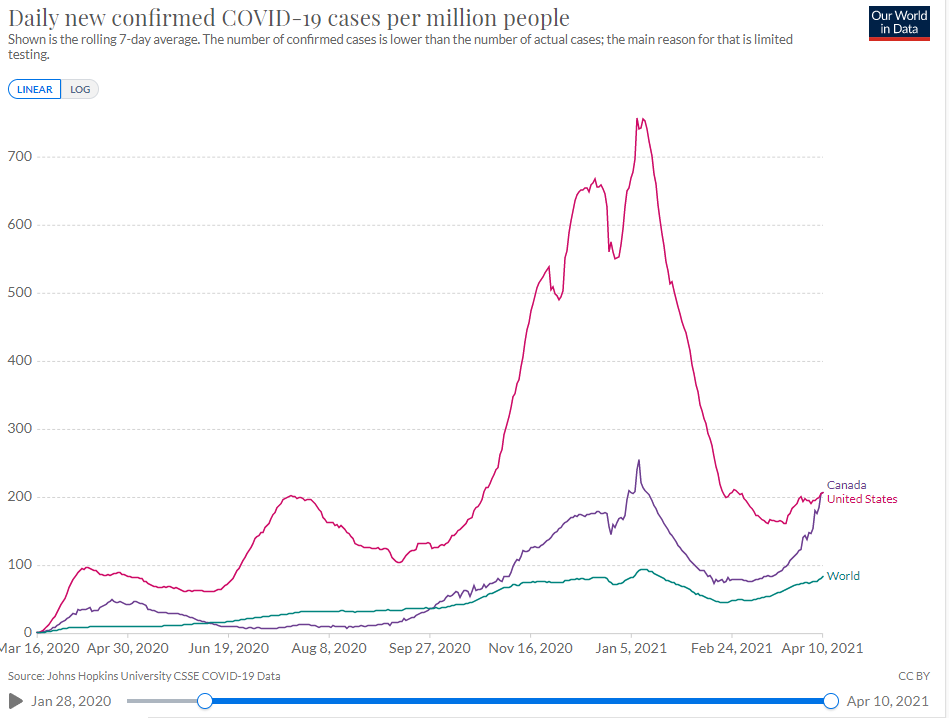 For a long time, Canada has been embarrassing us all on this side of our shared border, due to its very much better response to the virus and lower case numbers.  But now, and for the first time ever, Canada’s new case numbers (as a percentage of population) have risen to equal or on some days even slightly exceed those in the US.

That is an astonishing change.  Maybe in part it is due to a much higher vaccination rate in the US.  And maybe this article hints at another contributing factor, too – a BC ski resort has been heavily hit by one of the more aggressive virus variants.

The lesson from this, and as mentioned in the opening comments, is “it ain’t over ’till it’s over” and it is too soon to relax.  I’m not so worried about vaccinated people, and I suspect a large part of the reason we are told that everyone should still socially distance and keep wearing masks is simply because there is no way to tell who has been vaccinated and who has not been vaccinated.  Dr Fauci recently explained what he is doing these days.

But if you’ve not yet been vaccinated, definitely do remain as cautious as ever – perhaps even more so due to the more aggressive virus strains now out there.

Here’s an interesting new presentation on vaccination numbers, showing the percentage of people by country or region who have had at least one dose of vaccine.  The rate of vaccinating in the UK is dropping off (now that the EU is trying to keep vaccines made within its borders away from the UK and rest of the world), and Canada’s rate is accelerating.