The temptation to fill this with April Fool’s Day jokes is almost overwhelming, although – at least in New Zealand, where I grew up – the convention is that you only conduct such jokes until mid-day.  It is now well after mid-day, so I shall forego the temptation.

Although some of the real items of news seem almost like April Fool’s Day jokes.  Like, for example, the on-again/off-again love being given to AstraZeneca.  We’re only days past the reversal of nervous-nelly countries suspending AstraZeneca’s vaccine and reassuring us that which was obvious all along – there’s no risk whatsoever – but now we’re back in the halting AstraZeneca vaccines once more – for example, Germany has banned it for use by under 60 year olds, and Canada has banned it for under 55 year olds.  Apparently Canadian 55-60 year olds are made of stronger stuff than their German counterparts – no doubt lumberjacks (ahem), the lot of them.

Also not an April Fool’s Day joke, but definitely a joke, and offered to us by fools, is the WHO report pretending that the coronavirus didn’t come from a Wuhan bioresearch lab.  And they’ll definitely ensure they’ll never ever have this nonsense challenged because – as this article points out “The team proposed further research in every area except the lab leak hypothesis”.  Utterly shameful.

Talking about utterly shameful jokes offered to us by fools, WHO have been busy this week.  They’ve reluctantly conceded that possibly ivermectin reduces mortality by 81% in people with Covid, but notwithstanding that finding, they recommend NOT to use ivermectin for people afflicted with the virus.

Happily, at the same time, Pharmacy Magazine in the UK published a more sensible analysis of the pros and cons of ivermectin, as did the British Ivermectin Recommendation Panel, with an excellent scientific dissection of official lies.  The Argentinian Ministry of Health has also found in favor of ivermectin. 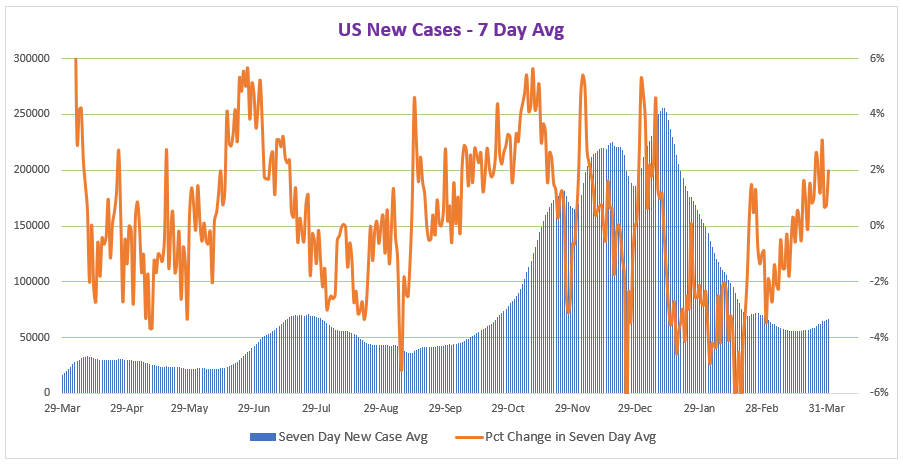 Talking about nonsense and science, the claim by the Biden administration that “we’re beating the virus” seems to be awkwardly and obviously rebutted by the rising numbers of new virus cases in the US.  Mind you, the previous administration wasn’t very good at accurately assessing the numbers, either – this is not meant as a sole criticism of Mr Biden and his people, merely a sad observation that the people at the helm of the ship of state may change, but the ship itself continues on, unaltered.

If you’re a pessimist, you’d say Iowa moved one step “the wrong way” on the list of states with the most cases.  If you’re an optimist, you’d say that Utah improved its ranking by one step (I guess which you are depends on which state you reside in).

There were no changes in the US death rate list.

Bahrain moved up one on the minor country list.  France and Poland both climbed up the major country list, and Jordan appeared for the first time, while Italy dropped off the list.  Brazil dropped two places, belying the nonsense articles of a week or two ago about the apocalyptian (is that a word?) nature of its latest surge.

Although Brazil dropped two places on the new case list, its death rate is still growing, causing it to appear on the death rate list, displacing France.

When the only tool you have is a hammer, every problem looks like a nail.  So it is unsurprising that politicians around the world are rushing to “solve” the problem of future pandemics by creating a new international treaty.  Because, I guess, viruses are known to respect treaty provisions?

Frankly, a global treaty on pandemic responses strikes me as insanely naieve and (hopefully!) unenforceable.  Why?  Because if countries can’t be trusted to look after their own citizens at present; what extra impact will a global treaty have?

No part of what has happened over the last year has surprised anyone in the epidemiological field, nor anyone in the field of respiratory virus infections.  It has all been 100% predictable – and 100% predicted.

Both Republican and Democratic administrations have allowed this country’s supplies of PPE and other emergency response measures to drop and drop and drop.  Almost certainly, a few years after we finally get out of the Covid crisis, we’ll see a similar pattern repeat again.

Another problem is when politicians have a choice between initiating draconian-seeming quarantine and control measures that risk their re-election, or adopting a laissez-faire hands-off approach, what do most politicians do?

So it is unsurprising that the politicians now advocating an international treaty on pandemics admit they don’t really know what they could write into the treaty.

Not yet acknowledged, but clearly a related issue in the background, is how any of the treaty provisions would be enforced.  We can’t even get NATO members to pay their full committed shares of NATO costs, and the world’s largest polluting nation (China – twice the amount of emissions of the next largest country), although a signatory to the Paris accords, says it will continue increasing emissions until 2030.  China is also ignoring Law of the Sea provisions while it takes over and claims territory it doesn’t own in the South China Sea.  How could the UN or WHO or whoever create and evenly enforce a pandemic treaty across the entire world?

To say nothing of the inevitability that it end up as another wealth-transfer mechanism.  Just as the “wealthy” countries like the US have committed to meet the costs of “poor” countries (like, believe it or not, China) for controlling/reducing their emissions, you just know we’d again be required to meet all pandemic measure costs for “poor” countries, and you also know that much of the funding given under that guise would get lost through corruption and inefficiencies.

Even if a treaty is developed, let’s also hope the UN can not enforce it.  That’s way too uncomfortably like the concept of world government by a shadowy group of people that you and I can neither elect nor recall, and as has consistently been shown by UN (and WHO) actions on many matters to date, they are unlikely to act in a way that is beneficial to the US or supportive of the freedoms we hold dear.

Here’s another promising anti-viral to treat Covid.  And a nasal spray that continues to show great results.

Also, an existing drug that seems like it can be repurposed as a Covid treatment too.  But do we really want to find ourselves taking an OCD/anti-depressant, if we don’t suffer from such things?  Wouldn’t it be nicer to take something that doesn’t materially impact on our state of mind – you know, something like ivermectin or hydroxychloroquine?

This is a complicated jumble of an article that seems to suggest that vaccines alone are not enough to rid us of the ongoing threats of the Covid virus.

This is not a surprise, particularly because not everyone wishes to be vaccinated.  And do I need to mention again that “herd immunity” doesn’t guarantee you personal protection and safety, it just reduces your chance of encountering someone with the virus, but if you do encounter someone with it, your chance of being infected and possibly dying remain the same as if herd immunity didn’t exist at all.

Lastly in this section, some famous last words from just over a year ago – “the situation is under control and therefore there are no reasons for concerns”.

If you’ve ever messed up a cake recipe by mistaking teaspoon measures for tablespoon measures, or the salt container for the sugar container, you’ll understand how it is possible to make mistakes in cooking.  We certainly have done such things, but even so, we’re not sure we understand how it is that a contractor for Johnson & Johnson managed to mess up 15 million doses of their single-shot vaccine.

Even more upsetting is this article which reports the company in question has a history of quality control problems.  Let’s hope any other errors, in any of the vaccines, have also been detected before they reach our arms. 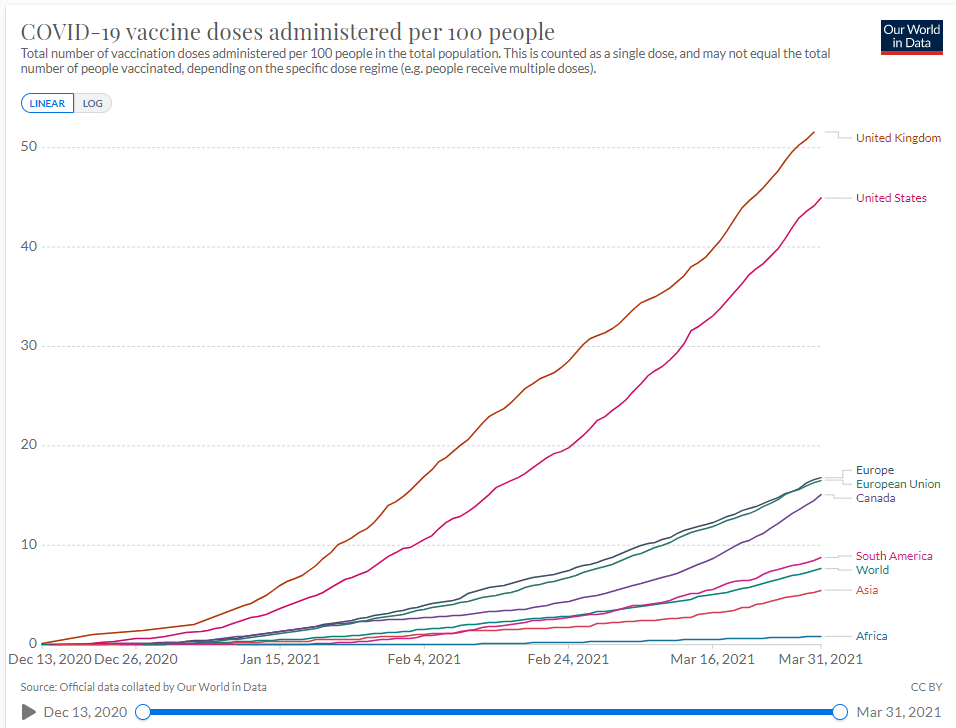 The UK continues to lead most of the rest of the world, closely followed by the US, in terms of vaccination rates.  Europe is at a state similar to where we were two months ago.  This is why we dare to hope it may become possible to travel to the UK later this summer, but remain pessimistic about being able to do the same to Europe.

The US now has over 50 million people who have completed both doses of vaccine, and another 50 million who have had one dose, and is vaccinating between 2.5 and 3 million people every day.  We are told all adults will be fully vaccinated by the July 4 weekend.  That’s a very positive concept.

Europe’s rising Covid case numbers are seeing a new wave of lockdowns, most notably France, with a one month national lockdown now ordered.

Have you noticed how so many countries are going through a series of “too much” lockdown followed by “too little”, before over-correcting back to “too much” again, then rushing too soon into another stage of “too little”.  That’s a bit like the person who, feeling cold, jacks the a/c up to 90°, then, half an hour later and sweating, turns it down to 50°, only to be shivering and back at the dial again in another half hour, pushing the setting back up to 90° again.  (I have this problem on planes – if I ask for the temperature to be raised or lowered, there is always a rush to add half a dozen degrees, rather than just one or two.)

This is not a complicated issue – neither for room temperature management nor for controlling the virus.  Small steps rather than big steps, and slow rather than too fast relaxations of controls is all it takes.  If a measure is working and case numbers are dropping, let them drop some more before changing things, and whatever you do (here’s the big mistake universally being made) don’t then change things back to a scenario that previously had resulted in rapid growth in numbers.

The pervasive incompetence being so consistently shown in so much of the world makes one question the capabilities of governments of all types.  What has gone wrong with the world and the people we entrust with the responsibility of maintaining its order?

Self-administerable Covid tests can cost as little as $5 each, if bought wholesale in bulk direct from the manufacturers.  The slow laboratory type PCR Covid test costs more, although it is unclear if it is actually a “better” test.  It seems a “good” price for us as patients to pay for a PCR test is around $150.

But if you’re in New York, be prepared to pay as much as $3358 at some hospitals for a standard ordinary normal Covid test.

This might seem like a “victimless” crime, because the reality of this rip-off is obscured in layers of medical billing and paid for by insurance companies.  But, sooner or later, those ridiculous charges end up impacting all of us in our medical insurance rates.

So here’s a question for New York’s fairly activist Attorney General.  I believe she has sued profiteers when overcharging for hand sanitizer.  How about now suing hospitals for doing the same with Covid tests?  Indeed, why not sue them for overcharging on every other product/service provided by hospitals at more than, say, a 100% markup.

If a hospital can’t make a profit at a 100% markup, it doesn’t deserve to have its wasteful inefficiencies subsidized by all of us.

Lastly for the week, and also not an April Fool’s Day Joke, is this report that men who contract the virus have three times the risk of suffering from ED.

Another good reason to get vaccinated, right?  🙂