Today saw the largest number of new Covid cases reported in the US since 26 February.  After enjoying three days in a row of dropping case numbers, we’ve now had three days in a row of rising cases (the seventh of the last seven days was also reporting falling cases) so the net result for the week has been more or less no change or trend, rather than any type of drop (or rise). 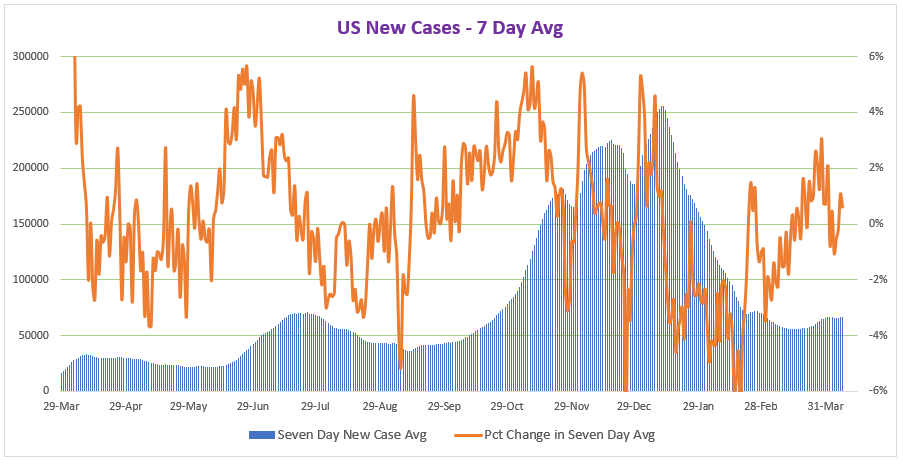 So, how do describe what happened in the last week, and the few weeks before?  Apparently we have to be very careful what word to use.  It isn’t a “new wave” nor is it, we are told, a “surge”.  The ever-present “experts” are not sure how to describe the latest increase.  Perhaps for once they could spare us their pontifications and simply let the numbers speak for themselves.  Saint Fauci says it won’t be another “explosion”, but it might be “an increase in cases”, and it remains to be seen if it will “explode into a real surge”.

Ever wonder why St Fauci is thought to be never wrong?  Because he speaks in such broad generalisms that any outcome can subsequently seem to have been predicted by him.  Well, apart from things like his shift on masks, from none to one to two.  Or his shifts on the level of immunity needed for “herd immunity”, but he explains that shamelessly by telling us “he knows best” and so he’ll sometimes deliberately lie and tell the truth in stages because that is for our own good, we can’t be trusted to react properly if he drops a truth bomb on us all at once.

Talking about experts not being sure, there’s the delightful situation at present in England, home of seldom-correct experts, where two highly respected universities with similar names and close to each other – ICL and UCL, both in London, are fielding their respective teams with very different “expert” opinions.  One “expert” team says that Britain will achieve “herd immunity” on Monday.  The other “expert” team is equally certain that Britain is nowhere near herd immunity.

Both groups can’t be correct, but we’re sure neither will ever admit to any error.

Still talking about experts, here’s another “expert” offering his validation of the Chinese/WHO nonsense/whitewash about the origins of the virus.  I was particularly curious to notice in his article that he mentions there are four theories about the origin of the virus, but then only talks about three of them.  You don’t need to be an expert to realize which was the omitted theory.

The expert, WHO, and China want you believe that the virus magically made its way from a bat (not that any bats have been found with SARS-Cov-2 virus) to some frozen food in some other country, and from there to China, while refusing to even admit the possibility that a lab that has had a series of virus “escapes” in the past had another such accident which saw the virus escape into the wild.

Fortunately, some scientists still have their integrity intact, and this article reports on a group of scientists who say the WHO/China study “provided no credible answers” and are calling for a real study into where the virus came from.

I was a bit critical of England and its experts, just above.  But they sometimes come up with brilliant ideas, such as this concept to allow and encourage everyone in England to test themselves, twice every week, at home, to be sure they don’t have an infection.

This is a brilliant idea; a shame it hadn’t been introduced a year ago, and everywhere else in the world, too.

Talking about excellent ideas, there’s been a huge amount of criticism about the concept of “vaccine passports” recently.  Of note is this survey which finds 91% of travelers are happy with the idea.  So why are some people so vociferously opposed?  Who doesn’t want to travel safely?

Of even greater note is the strange state of Florida.  Clearly some people there are suffering from sunstroke or some other form of madness.  In the last week or so not only has the Governor tried to make it illegal for private businesses to selectively do business with vaccinated people only, but his adminstration is now suing the Biden administration for not encouraging cruise lines to restart cruises from FL ports, saying that vaccinating passengers makes cruises safe.

The ivermectin haters are in a panic – people can freely buy ivermectin at animal and farm supply stores.  So they are doubling down on their original lie – that ivermectin is not helpful, by now saying it is dangerous.

On 6/26/2019, the NY Times reported “the drug is considered safe enough to give to almost everyone except the youngest infants & pregnant women”.  But in 2020 it changed that positive statement and said about ivermectin that it is “a drug used on animals that may cause serious harm in humans”.

Don’t believe everything you read in the NY Times.

There were no ranking changes in the US.

Sweden moved up to now be the third worst major country, and Poland swapped a place with the UK.  The UK seems likely to drop another place in the next few days if Jordan continues its upward momentum – that is great news if you’re hoping to travel to the UK later this year, not so good if you’re wanting to travel to Jordan.

The UK also dropped one place on the death rate list, and Mexico dropped two places.

This seems like a great idea – the headline tells us that Britain is to launch a large-scale effort to find a pill to treat mild to moderate Covid infections in their early stages.  Yes, that’s definitely what we need, but – wait……  Don’t we already have one?  Ivermectin (50 trials covering 15,838 patients reported so far)?  Maybe even two – hydroxychloroquine (232 trials covering 359,000 patients now reported)?

Why the rush to spend millions/billions on developing new treatments while overlooking treatments with known safe and effective medicines already?

Could it be part of the reason for this is that the known safe medicines are out of patent, inexpensive, can be readily manufactured by anyone, and offer no profit potential.  Increasingly, it seems to be the only explanation that fits.

A new administration.  A new CDC director.  But still plenty of nonsense and statements that need to be “explained” and “interpreted”.  In this case, CDC staffers are having to risk the ire of their boss when they try and explain that when the director said that vaccinated people can’t spread the virus, what she actually meant to say was “we don’t know if they can or not”.  An easy mistake to make, I’m sure….

She should learn to talk like St Fauci.  She should say “vaccinated people don’t spread the virus, except of course if they do”.

Here’s another off-the-shelf drug that is showing promise at treating Covid infections.  Wouldn’t it be funny if we end up realizing that all the drugs we need to cure the virus are already on pharmacy shelves, and we don’t need vaccinations at all….

That’s a large part of why I’m not rushing to be vaccinated.  I’m fortunate not to be in a high risk environment at present, so I don’t need to rush to be vaccinated.  I will get vaccinated, but the longer I wait, the more data there is on the different vaccines, and the almost 100 more vaccines going through trials too, meantime I’ve my HCQ, IVM, and assorted other medicines at the ready.

The trainwreck that is the AstraZeneca vaccine just keeps on keeping on.

My question is simply this :  Why did none of the myriad of concerns that are now being expressed around the world come up in the safety trials prior to governments approving the vaccine?  Is there something wrong with the safety trials?

Of course, I ask that question rhetorically, and as I’ve said several times before, AZ’s trialing was a confusing mess of mistakes and changes.  But even so, why were no risk elements identified?

If they were overlooked with the AZ vaccine, how about the other vaccines?  Do we need more rigorous trials?  And, yes, of course, I definitely would love to see (or have seen already) much more robust and standardized trials and the data from them.

Here’s an interesting new vaccine, but it is at least six months away from approval, assuming of course that it successfully goes through all three stages of trialing (and keep in mind that most medicines don’t).

An interesting new vaccine, but at least six months away from approval, assuming it successfully goes through its three stages of trialing. See : Phase 1 Clinical Trial of WRAIR-developed COVID-19 Vaccine Begins https://buff.ly/3dCbS7f

Here’s a frustratingly nonspecific article about a Covid vaccination site closing early and cancelling appointments for 640 people due to adverse reactions in some of the people who had received the shot already that day.

Don’t you think it would be relevant information to tell us if the adverse reactions were life-threatening, or unexpected, or just the usual sort of things that happen?

A bit later in the day, we find out why the article was so vague.  The authorities were almost certainly embarrassed at their idiocy in cancelling the rest of the day’s vaccinations.  Apparently 11 out of 1777 people who had been vaccinated earlier in the day had mild adverse reactions, described as being “in line with typical reactions” – nausea and dizziness.  But this less than 1% of people with normal anticipated reactions was enough to panic the Nervous Nellies operating the vaccination site, and so “out of an abundance of caution” they decided to cancel the rest of the day’s vaccinating.

Remember – whenever you see the phrase “out of an abundance of caution” the person using it is showing they are well qualified for a role as village idiot (in a small village) but useless at decision making in any context at all.

The 640 people who waited for hours while the authorities decided what to do have been rescheduled for another day, at which point they’ll then be given the exact vaccine that they didn’t get today.  Maybe there will be a different phase of the moon making it safer?

Mild reactions are to be expected, indeed, the more reaction, the more your body is reacting and responding to the vaccine and “learning” to protect against the real thing in the future.

One more point on vaccinating – be sure to get your second shot, and as close as possible to the day scheduled.  It is important.  The first shot does give you good protection, but we don’t know for how long.  The second shot is thought to both increase the protection and the longevity of the protection.

Apparently quite a lot of people are not returning for a second shot. 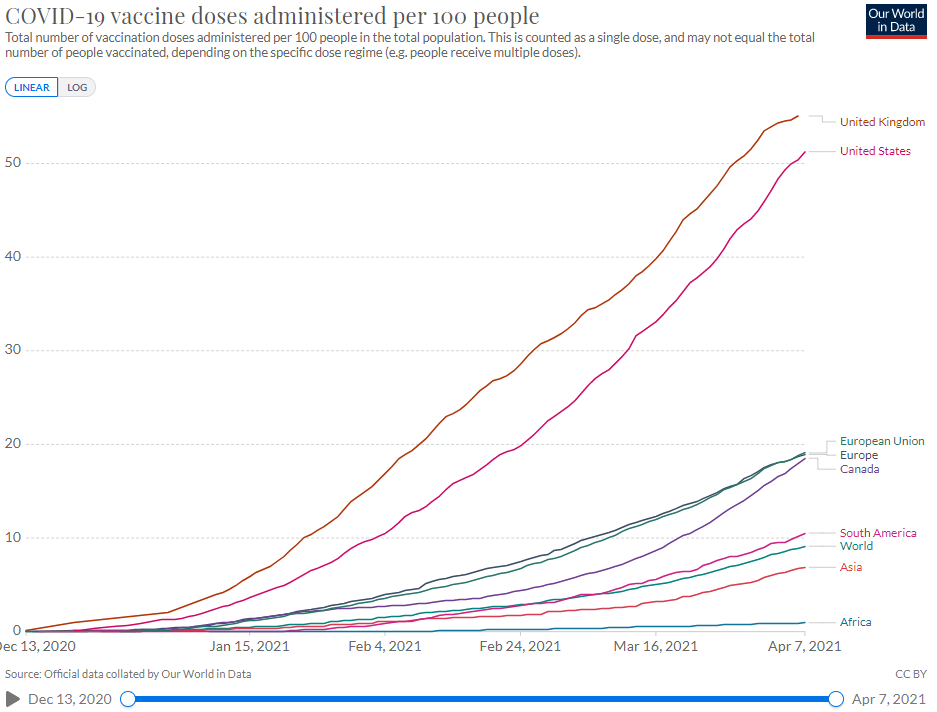 The US has now given more than half its population at least one dose of a vaccine.  That is great progress.

Now it is the Czech Republic’s turn for a dose of hype in this article. 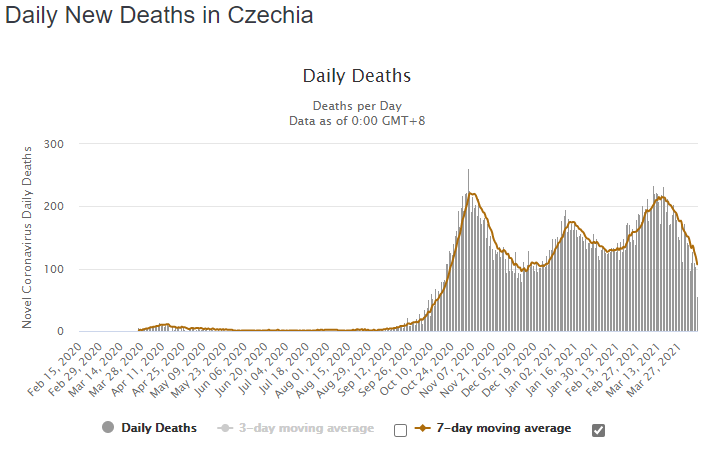 Look what is happening to the Czech death rate, and note how today’s death count (56) is the lowest since October last year.

Here’s a great map of what is happening in the US in terms of states that are experiencing rising or falling numbers of new cases.

What a strange thing to run low on – sachets of ketchup.  If we had to choose between a shortage of ketchup or toilet paper, we know which would inconvenience us the most!  Details here.