Less than an hour before I was vaccinated on Friday, I came across an article I wish I’d not seen until afterwards – the FDA advised that a Chinese company’s syringes has safety issues with their needles.

Why is so much of what we’re reading about the virus, vaccines, and drugs wrong?  Because, astonishingly, erroneous research is cited 100 – 300 times more than accurate research.  The linked article is a bit technical but echoes what has been found in other research on other topics and the propensity for wrong data to spread more readily than correct data.

But talking about studies, there’s another way to evaluate them as well as right/wrong.  There’s also the “trivial-useless/already-know-that” type of study – often costly and very detailed, but ending up telling us something that everyone already knows.  Such as, for example, this research comes to the conclusion that travelers are happy to pay for virus infection tests, if it means they can avoid a two week quarantine, and if the tests are affordably priced.  Did we really need a study to tell us that?

There were no changes in US rankings.

In the minor country list, Bahrain and Slovenia swapped places, and the Maldives appeared, while Lithuania dropped off the list.

In the major country list, France and Belgium swapped places, while Argentina shot up two places.  There were several swaps in the death rate list.

In the last week new case table, Bahrain stayed at the top of the list, with almost a 50% increase in new cases compared to the week before.  Uruguay also reported a lift in new cases, and the rest of the table showed the usual jumble of rises and falls, of appearances and disappearances.

India has slipped down the list again, and now is at 28th place, reporting a rate of 1,284 new cases over the last week per million people, a drop of 22% from a week ago.  The US has a rate of 528 cases/million and a drop of 24% over the week.  Worldwide, cases dropped 12% for the week.

You know things must be dire when even CNN now feels compelled to push back against CDC Director Rochelle Walensky and some of the nonsensical statements she’s made.  But at least it is relatively kind in its criticism and doesn’t talk about her crying on national television amid fears that the virus was about to pass a tipping point and overwhelm the country.

Prior to Covid I’d never in a million years ever thought that anything the CDC said about anything was other than gold-plated wisdom of the highest grade and purity.  Now they’re increasingly seeming more and more out of touch with the reality they’re supposed to be on top of.

Another example of the CDC doing the wrong thing (or, at least, not doing the right thing) is its apparent lack of curiosity about why some people are still getting infected after being vaccinated.  This could be profoundly important and helpful to know – in particular, to know which virus strains are proving to be most vaccine-resistant so the drug companies know how to evolve and improve their vaccines, and public health authorities know which virus strains require the highest degree of response.

I’m concerned the CDC is simply trying to avoid anything that might be taken as negative reflections on the vaccines.  Even if they keep the data restricted, this is important information they should be researching.

This is an interesting article, reminding us that the current crop of vaccines, while effective enough in perhaps the short term, are likely to be superseded by better vaccines that might more broadly protect against more variations of the virus, and hopefully for longer.  And while the “trauma” of the jab itself was happily mild, I remain eager for the day when the vaccine can be administered as a tablet, drink, or nasal spray. 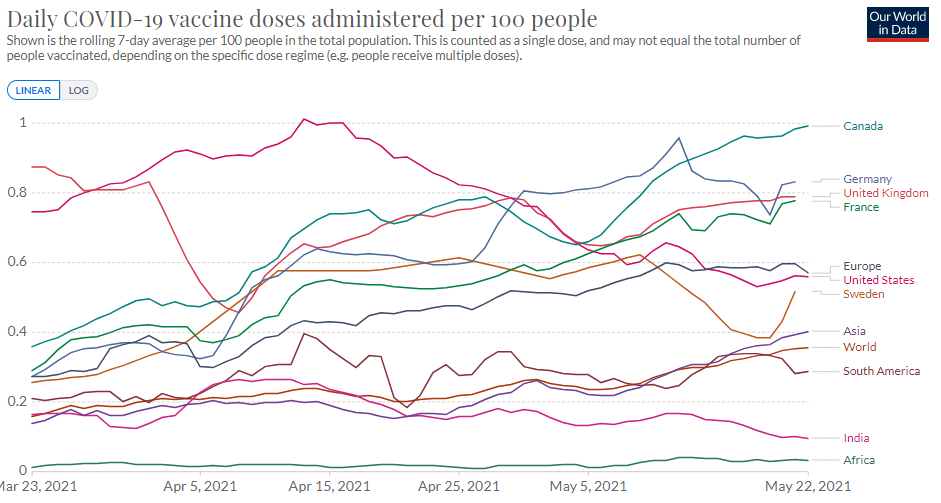 This is an interesting chart showing the changing rates of vaccinating over the last two months, with Canada now clearly leading the pack, while we in the US seem to be rather resting on our laurels.  Astonishingly, India’s vaccination rate has been steadily dropping. 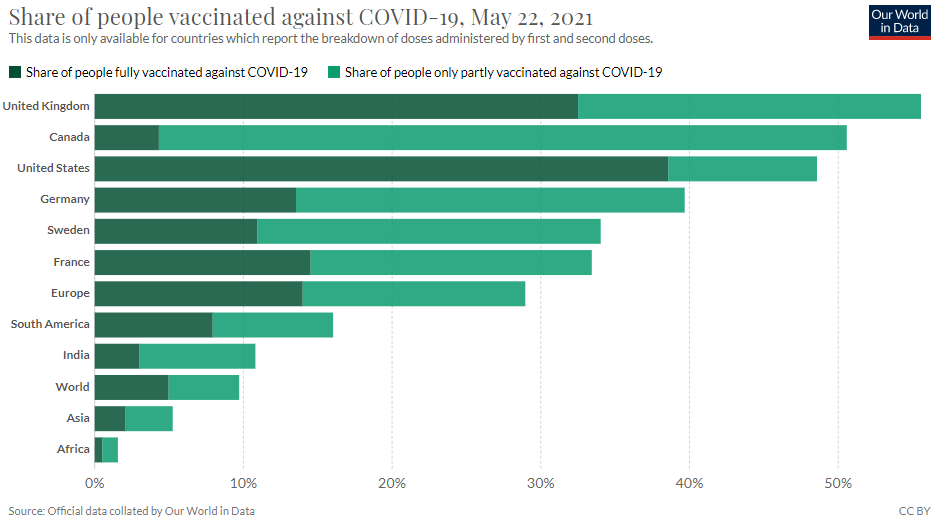 This second chart shows where assorted countries and regions stand in total.  The US has the highest percent of totally vaccinated people – now almost 40%, and Canada is showing a disproportionate number of people with one dose only rather than both doses.

Europe remains a mystery – well, its plan for its European citizens is becoming plain (an EU digital vaccination certificate will earn its citizens freedom of movement) but how that will work for foreign visitors remains unknown at this stage.

Not only do we not yet know Europe’s plans for other visitors, we should always remember its plans may change at any time, with little or no warning, as evidenced by Germany’s sudden imposition of a quarantine on UK visitors.  However, in the good news category, it seems probable that subsequent to 7 June, Spain will be welcoming visitors from a selection of countries including US, UK, and Japan.

And good news for fans of Alaskan cruising.  The US House has passed a bill waiving the need for US Alaskan cruises to include a stop in a “foreign country” (ie, of course, Canada), allowing Alaska cruises to proceed from Seattle.  A shame, a port stop in Victoria (or Vancouver) is always a lovely experience, but this will give cruisers more time in Alaska, and save the challenge of Canada not currently allowing cruise ships in.