Have you yet worked out what the new CDC guidelines for mask wearing actually mean for you in your local area?  You remember – just a couple of days after the CDC director said it was too dangerous to send her children to summer camps this year, we were then advised that all vaccinated people no longer needed to wear masks indoors or outdoors (except for on public transport), without a word of explanation for the sudden about-face by the CDC, or why the “no mask indoors” policy has an exception for public transport, especially on planes that we’ve been told so many times by the airlines couldn’t be safer due to their air flows and air filtering..

The difficulty we have, and made worse if we travel away from home, is that many state, county and city public health authorities have been reluctant to accept the new CDC guidelines.  For example, in my county (King Co, WA) we were told the county was “immediately adopting the CDC guidelines”, but “with some flexibility” – whatever that means, and the King Co public health department urged us to keep wearing masks indoors, even though no longer mandatory.

What does that all mean?  “Flexibility”?  “You don’t have to wear a mask, but we recommend you do anyway?”

A couple of days later, we were told what “flexibility” and “recommending” means.  Indoor mask wearing is compulsory again in King Co, WA.

No wonder levels of compliance and trust are lower than they should be, and matched by caution and unwillingness to vaccinate, too.

It isn’t just the US that is making a dog’s breakfast of their public messaging and public health policies.  The UK, while having much lower case rates per million people, has also suffered from government indecision and ambivalence.  This article does a great job of identifying some of their missteps, and within them are lessons for us all so we can do better, next time.  Or, for that matter, this pandemic is still far from over – maybe we should strive to do better now, too.

The week’s most disappointing (but not surprising) news – at least for some travelers from India – is that the cow dung they smuggled in to the US actually doesn’t help prevent or cure Covid.  As I said – not very surprising, for most of us….

Brazil and Italy swapped places in the death rate list.  The UK’s death rate was so low for the week that the count per million stayed the same as it was a week ago.

In the volatile “worst countries for the last week” list there were the usual series of changes, although Bahrain and Uruguay continue to stubbornly lead the pack, and with rates appreciably higher than last week.

India has dropped back down to 25th place, with a new case rate of 1,426/million and a 23% drop from last week’s number.

Here’s some interesting information on a new anti-viral drug that is being developed to fight Covid infections.  But don’t get too excited just yet – the information provided, while seemingly amazing (“could reduce the amount of virus in the lungs by 99.9 per cent”) is also totally meaningless.  We don’t know if the amount of virus in the lungs to start with was maybe way more than needed to cause an infection to become self-sustaining and growing or not.  Until real-world testing is done, we won’t know what the drug actually does in the real world at all.

We remain slightly nervous at these “frontiers of science” type technologies, and of course, we also wonder, yet again, why researchers are eagerly developing new technologies and cures rather than validating old inexpensive effective and safe cures. 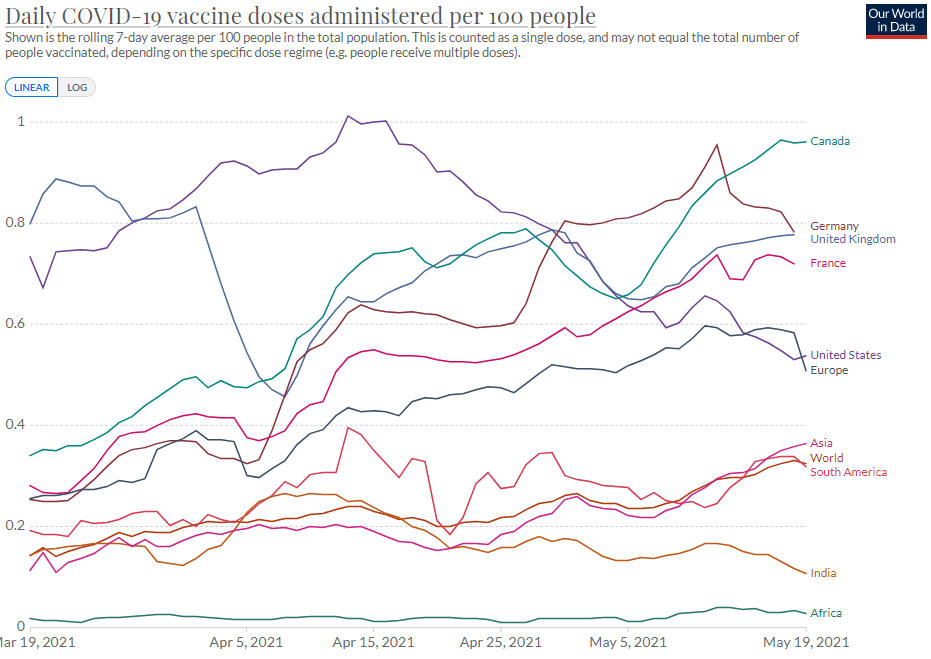 This chart shows the vaccination rate over the last two months for selected countries and regions.  You can see how first the UK was leading the world, then the US, then Germany, and now Canada.

The drop in vaccination rates in the US and UK is in part explained by how well both countries proceeded with vaccination rates earlier.  While the UK is still restricting the vaccine to selected age groups, the US now offers it to everyone, with a no-questions asked policy that even allows/encourages visitors to be vaccinated.

Here’s a wonderfully happy-making chart showing the steady decline in new US cases reported every day.  Case numbers have been steadily dropping for over a month now.  Long may that continue.

The EU is saying a lot about opening up to allowing potentially all vaccinated travels, perhaps by the end of June, but the exact specifics remain elusive and uncertain.  It is also uncertain whether all EU nations will follow this approach, and what there might be in the way of “gotcha” fine-print associated with the policy.  We do know that all three vaccines being used in the US are deemed acceptable by the EU, but more than that remains currently unclear.

Also unclear is whether the Olympics should proceed in Japan this summer at all or not.  They are currently scheduled for 23 July – 8 August, after having been postponed from last year’s original dates.  Opinion polls show 40% want them cancelled entirely, and another 33% wish to see further postponement.

With athletes not being required to be vaccinated, nor being quarantined upon arrival in Japan, and with Japan’s population being only about 1% fully vaccinated, it would seem like a dangerous concept to continue with the games as originally hoped.