The question I’m increasingly fixated on is whether new Covid case numbers are rising or falling in the US.  Unfortunately, so much weekend case reporting is not received until Monday/Tuesday rather than same day, so while there are reasonably reliable numbers through Friday, we can only guess at Saturday and Sunday’s numbers.

I can say with reasonable confidence that on Tues, Wed, Thu, and Fri last week new case numbers rose by increasing amounts.  Tuesday’s new case count was up 1% on Tuesday the previous week, Wednesday was 4%, Thursday was 13%, and Friday’s new case count was 14% up on Friday the previous week.  It is also worth noting that the four days prior to then saw steadily reducing decreases in new case numbers, so really there is an eight day trend of case numbers shifting from shrinking to growing.

I’ll know more about Saturday and Sunday in the next day or two, but at this stage, it would be astonishing (albeit also delightful) if the clear eight day trend suddenly disappears.  All of a sudden, articles such as this seem prophetic rather than alarmist.  Here’s a second similar-but-different article on the same topic.

The last few days of the week also saw some very surprising claims emerge about vaccines and their risks/benefits.  A peer reviewed journal published an article with a truly astonishing claim – For every three deaths prevented by vaccination we have to accept two inflicted by vaccination.  That’s surely not how vaccines have been sold to us, is it, and while part of that statement involves trying to reconcile different measures and risks between two different things, with of course problems in doing so, the bottom line claim is certainly eye-grabbing and headline worthy.

The second shoe to drop is within this article – the headline says it all – Vaccine-Related Blood Clots More Deadly than COVID-19 This Year In Australia.  One could make the headline even more extreme and be “accurate” – “twice as many people dying from blood clots as from the virus”.

I’d also point out that the blood clot danger seems to be a short term risk, the virus danger is a long term risk.  If we were to look at the numbers again in a decade, what would they show then, and, most of all, the unmeasured number is also important – how many people did not die from the virus because of taking the vaccine?  While something of an imponderable, isn’t that the most important measure?

Talking about unanswered questions and imponderables, the bizarre group of people who head up the CDC have come up with another head-scratcher of a policy decision.  They are surprisingly – astonishingly! – uninterested in understanding anything about vaccinated people who subsequently become infected with the virus.

Many of us would think that trying to understand the circumstances in which people can still catch the virus after being vaccinated would be incredibly helpful and valuable information.  But not the CDC.

And here’s another thing we’re not bothering to understand – what is the reality of “herd immunity”?  Remember how, six and more months ago, that was all that people could talk about, reaching herd immunity, and Dr Fauci gave a series of wildly different numbers as to what percentage of the country would need some type of immunity for the country to achieve herd immunity – breaking the bad news to us gently, as he subsequently boasted.

Do we need 70% immunity?  More?  Less?  How do we equate immunity from prior infection with immunity from vaccination?  How long do they both last?

None of these essential questions has a clear consensus answer at present, and for reasons best known to itself, the government doesn’t really seem to care.

The world as a whole showed a 2% increase in new cases.  That’s a very unfortunate increase – while we’re vaccinating everywhere, clearly new variants such as the Delta variant are having a stronger negative impact.  We’re losing the battle against the virus at present, in other words.

Here’s a great and encouraging article, that discusses a “sleeper” of a vaccine, just now moving to seek regulatory approval – the Novavax vaccine.  It has one huge benefit – it is not one of these “scary” futuristic mRNA type vaccines.  It uses a traditional type of vaccine process, the same as is already used in the widely distributed Hepatitis B and Pertussis vaccines.

It is also very highly effective, at least as good as the mRNA vaccines.  If I’d not already taken the single-shot J&J vaccine, it would definitely be the vaccine I’d want to take.  Perhaps some of the large groups of people who are concerned about the experimental mRNA vaccines might be willing to consider the Novavax product instead.

Let’s hope it quickly gets approved and distributed. 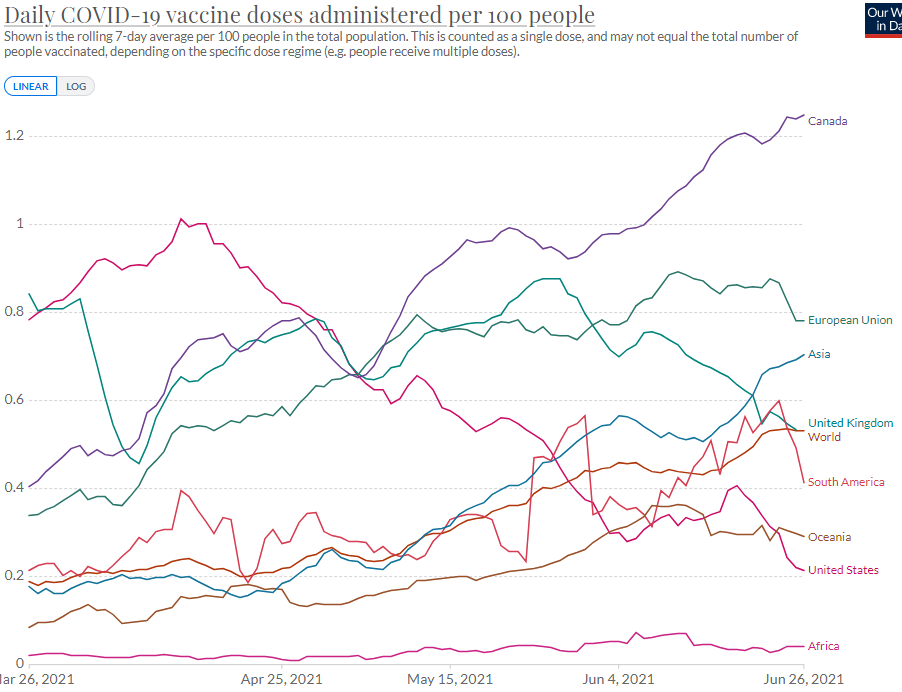 Winners and losers in the race to get vaccinated continue to shift.  Canada is doing astonishingly well, and the US is beating no-one at all except Africa.  The UK, in the grip of new case rates that are rising by more than 50% every week, continues to steadily slow down its vaccination rate. 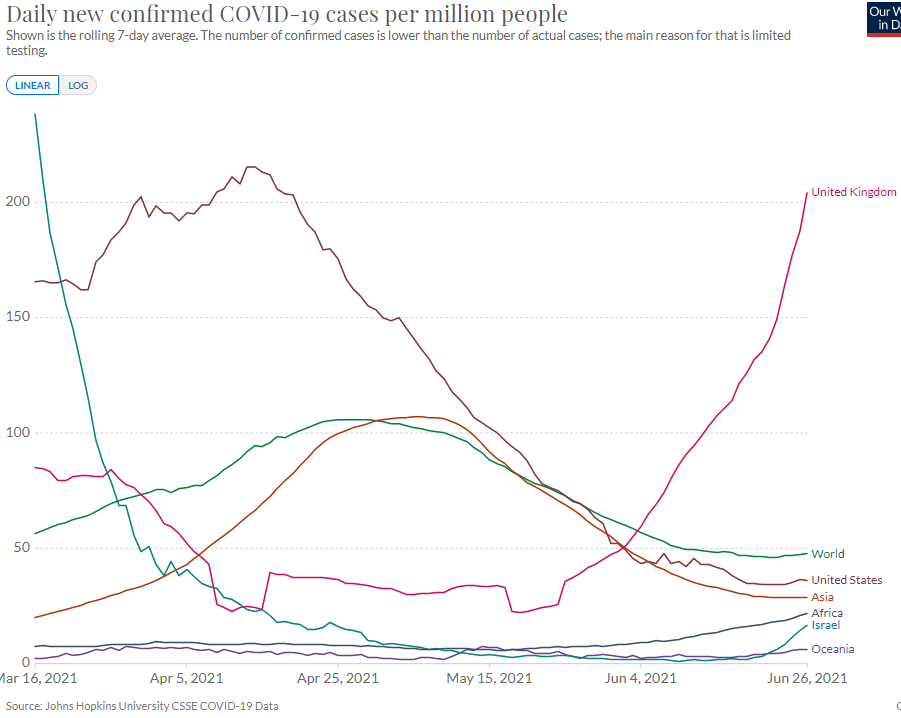 There are two “hints” about what we can expect, in the US, in the future.  The first is the UK – they have a comparable vaccination rate to us, and their new case numbers, after steadily dropping down to the low 30s of new cases, per day, per million people, has now risen to 204 in just over a month, and shows no signs of slowing.

The second is Israel.  Israel has 60% of its population fully vaccinated, with the Pfizer vaccine.  But that is proving insufficient to stop their own rising cases, also because of the Delta variant.  While their numbers are dwarfed by the UK, even in terms relative to population, the trend is clear.  Their case numbers have increased ten-fold in the last two weeks.

So what does that mean for us in the US?  Can we expect our numbers to rise ten-fold in the next four to six weeks?  How much further might they rise?  The answers seem to be “yes” and “anyone’s guess”.

How about the rest of the world.  Portugal is already falling into a Delta crisis, too, numbers are rising in Spain, and other European countries are gravely concerned.  As mentioned above, world case numbers rose, overall, by 2% in the last week, so there are stirrings of rises more broadly.

Why is the UK so slow to allow its own vaccinated citizens to leave and return home again without quarantine?  Because, we are told by their Transportation Secretary, it would be unfair on unvaccinated people to single them out for quarantine.

Never mind that the UK is struggling to get more people to agree to be vaccinated…….