I have criticized much of the recent trend by the mainstream media to try and find things to continue worrying about with the pandemic, even as each day sees steadily decreasing numbers of new cases, both in the US and worldwide.

But, that’s not to say there might not be valid items of concern, and similarly, just because we’ve had 1 1/2 months of dropping-every-day new cases in the US is not to say there mightn’t be a reversal at any time and a return to increasing cases again.  Britain had seen wonderfully dropping new cases, and then, due apparently/primarily to rising number of cases with the Indian (or as it is now phrased in the latest “new speak” politically correct manner, the Delta) variant.

The same could certainly happen here, too.  Which is all the more reason to press on with vaccination as quickly and completely as possible.  As you’ll see below, the US vaccination rate is currently trending in absolutely the wrong direction.

Here is an example of a concern that may be valid – people who have extended cases of Covid give the virus more time to mutate within their body.  The article lectures us that this is a reason to help vaccinate everyone, everywhere.  That’s an understandable conclusion.  But there’s another conclusion as well.  Giving everyone with an infection a dose of ivermectin to limit the infection and speed up its elimination is at least as essential.  The article is silent on that point.

Talking about being silent on the topic of ivermectin, there was one astonishing case of a gratuitous mention of ivermectin on Saturday, all the more surprising because it was in the form of an advertisement paid for by GAVI, the global vaccine alliance group lobbying for wealthy nations to give vaccines to poorer nations.

But, and you knew there’d be a but, didn’t you.

As you can see from this screen clip, if you search for “ivermectin covid studies” on Google, the GAVI ad appears.  But you don’t even need to click the link to see that the article is a negative one, rather than a positive one.  Wouldn’t you think that a group ostensibly wanting to help poor people survive Covid would be keen to advocate IVM because it is wonderfully low cost and effective?  Perhaps this group is more keen to help big pharma make more billions of dollars profile from selling vaccines?

There is no obvious reason why a group ostensibly advocating for global vaccination would spend money on advertising a negative article about ivermectin.  How does this advance GAVI’s cause at all?  As we regularly find ourselves obliged to conclude, the resistance to ivermectin is primarily based on monetary issues, not medical ones.

There continue to be no shifts of rankings in the US states, and with the numbers dropping each week, the gaps between the states are harder and harder to bridge, so we expect few changes in the foreseeable future.

In the minor country list, Slovenia dropped two places.  The top half of the major country list remained unchanged, with small changes in the other half, and no new entrants.

In the death list, Peru’s recount of its casualties now sees it with nearly twice the number in the Czech Republic, now definitely dropped to second place.

The volatile list of last week’s countries with the most active current case rates had the top five countries keep their rankings, although their case rates were generally lower.  India’s cases dropped another 33%, the US had a 36% drop, and the world as a whole enjoyed a 16% drop.

The rest of this newsletter is for the very kind Travel Insider Supporters – it is their support that makes all of this possible, and it seems fair they get additional material in return.  If you’re not yet a Supporter, please consider becoming one, and get instant access to the rest of the Diary Entry, additional material on previous diary entries, and much extra content on other parts of the website too.

If you’re a contributor, you should make sure you’re logged in to the website, and when you are, you’ll see the purple text and balance of the newsletter below on the website.  If you’re not logged in, or reading this via email, you need to log in on the website first.

Items below include a strange story about developments in China, a look at winners and losers in the vaccine race, and a prediction about when NZ and Australia might re-open based on their vaccinating rates, the Phantom is back in London, and the promise of vaccine passports to allow us to travel to Europe remains present but unexplained.

As always, many thanks for your kind and much appreciated support.  Please now keep reading your special additional content.

This is a strange story about China that combines two seemingly different stories – a virus outbreak and problems with the local Chinese vaccines.  Is there something we’re not being fully told here? 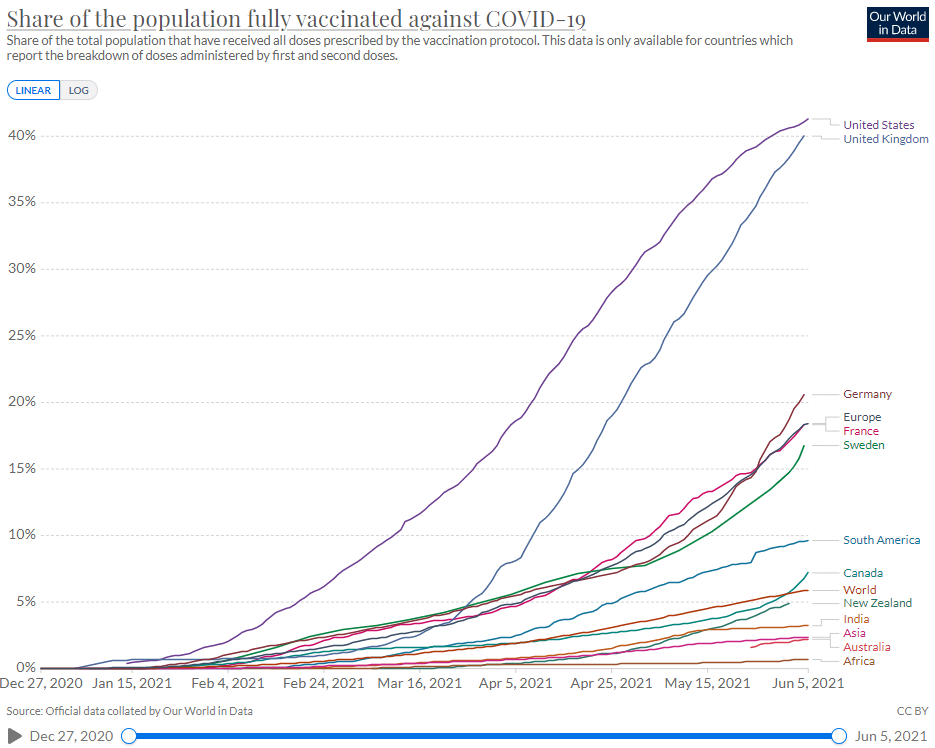 I was curious to see what is happening “down under” in New Zealand and Australia.  These two countries – NZ in particular – are delaying any type of opening up of their currently tightly closed borders until they’ve vaccinated a sizeable proportion of their populations.

Looking at the chart, their expectations of probably remaining closed all this year seem realistic. 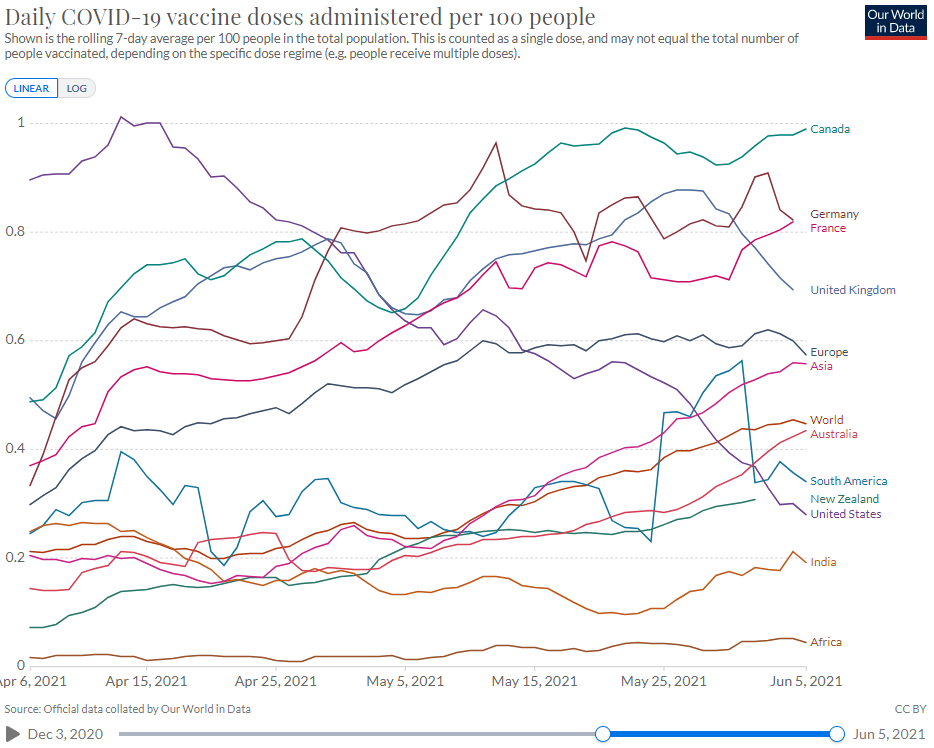 This is an interesting look at the last two months of vaccinating, showing the daily rate as a percent of population of vaccine dosages given.  You’ll see that the US trend has been  a steady decline, the peak rate of 1.01% of the population given the vaccine on a single day on 13 April has dropped down to a rate less than one third of what it was then.

Here’s an encouraging article, at least by its headline “Americans May Be Able to Obtain the EU’s Digital COVID Certificate for Travel“.  But how exactly does one get such a certificate?  Umm, if you want the answer to that question, don’t bother reading the article, you’ll not find anything practical on the topic at all.

I’m sure that, sooner or later, this will all be sorted out and will be simple and easy to accomplish.  But, will it be sooner?  Or will it be later?  Increasingly, the concept of “sooner” is seeming to be less and less realistic.  Alas.

A happy re-opening.  The Phantom of the Opera is back in London, after its forced closing in 2020.

Lastly, thank you again for your very much appreciated support.  I hope this gives you something of value in return.  Without your support, not just the extra material, but all the material would be entirely not possible.