It has been a relatively quiet Friday/Saturday/Sunday for Covid news – although part of the “quietness” is perhaps my feeling a bit saturated with repeating and repetitive stories about surging numbers of new cases all around the US and world, which I’ll spare you from.

One non-Covid thing.  If you missed it on Friday in our regular newsletter, could I ask you to please share your opinion by voting in our reader survey on how long is too long to stay on hold.  The link will take you directly to that part of the newsletter to make it quick and easy for you to vote.

Thank you for sharing your opinion on this.

Argentina rose two places on the death list.  The UK is starting to register higher death numbers, but the US is still catching up, albeit at a glacial rate.

The list of countries with the most countries per million people in the last week showed, as always, some large changes.  Of greatest relevance for many of us will be the continued rise of the UK (now up to fifth place) and the Netherlands appearing on the list too.  The Netherlands has the third highest increase in cases over the last week of any country in the world (a truly stunning 574% rise, from 5,835 cases last week to 39,332 this week).

The UK’s increase, by comparison, was a positively pedestrian 28%, and we in the US rose by about 25% (I have to guess a bit because many states haven’t reported case numbers for either Saturday or Sunday).

The world as a whole reported an 11% increase in cases over the last week.

The new frontier on vaccines?  A third dose.  Vaccine companies are salivating at the thought of selling another dose of vaccine to billions of people.  There’s just one small issue – there’s no proof that a third vaccination is needed or beneficial, and noting the growing number of side effects that are appearing, there’s concern that a third dose of vaccine might cause a disproportionate rise in side effects.

This is not a case of “If one is good, two is better, and therefore three is better still”. 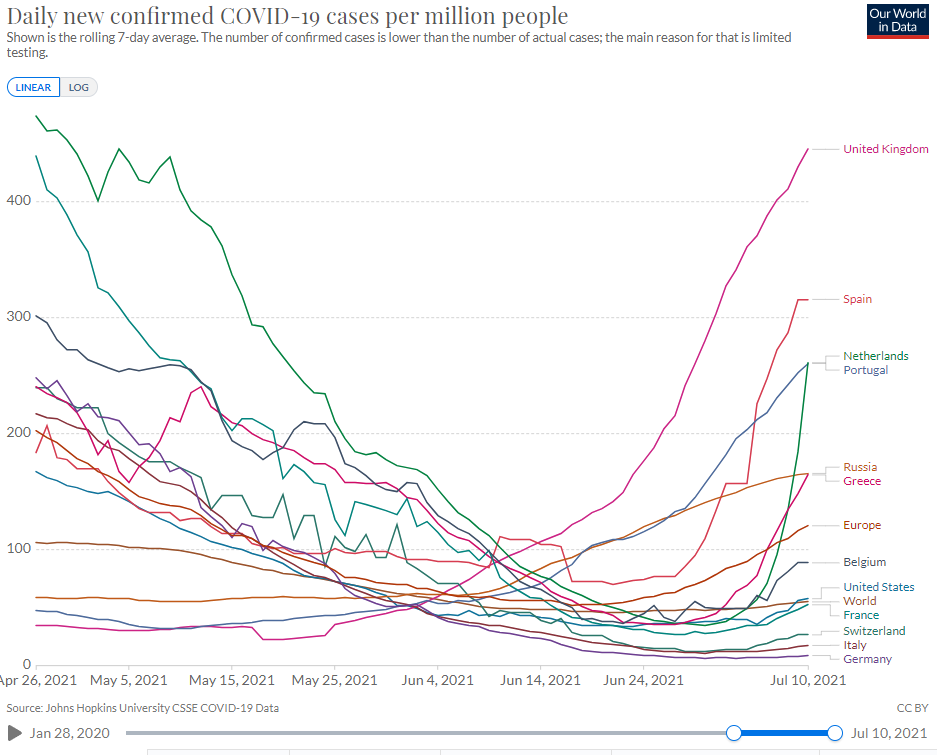 This graphically shows how virus numbers are starting to run away with themselves in Europe.  Look in particular at the extraordinary climb in cases in the Netherlands.

We guess that stories of gloom and doom sell newspapers, which perhaps is why journalists love to massively exaggerate when it comes to stories about Covid’s impact.  We’ve seen a series of apocalyptic articles suggesting that entire countries are about to sink under the weight of Covid cases, stories made all the more ridiculous because they’re often out of date by the time the article appears online, and because many other countries are quietly suffering much worse fates.

This article is a great example, with the heading “Huge New Wave is the Covid Nightmare Scientists Feared Most”, a pull-quote “The Boat is Sinking” and a subheading “It has long been held up as the nightmare scenario: COVID surging into the largely unvaccinated continent of Africa, and that is now becoming a reality.”. 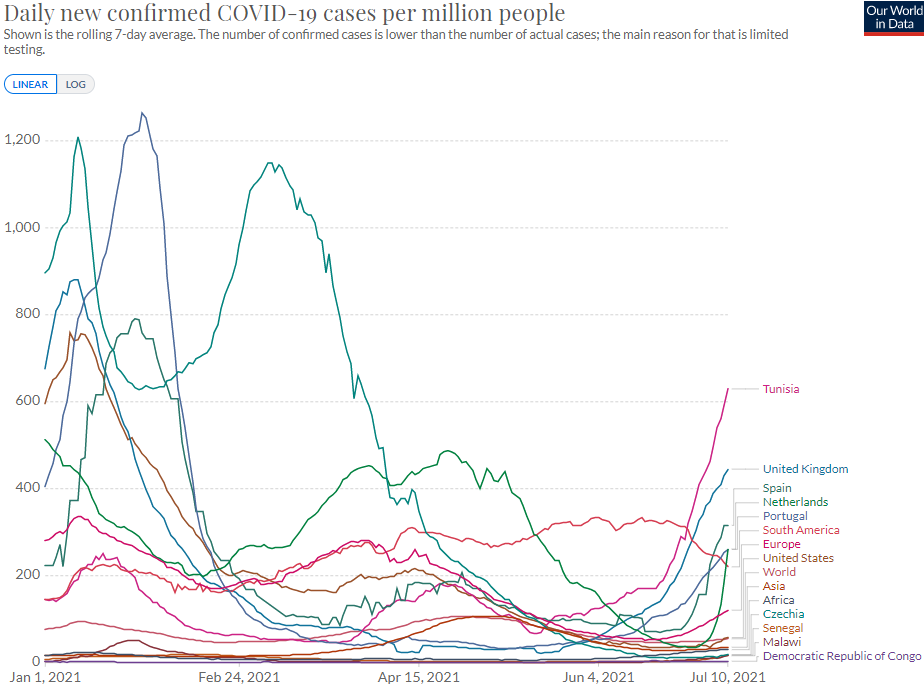 The article specifically talks about Tunisia, Malawi, the Democratic Republic of Congo and Senegal, all allegedly experiencing deadly surges.  Now look at the chart above.  Yes, Tunisia’s numbers are rising, but see what has happened to other countries earlier in the year to put that into perspective.  As for Africa as a whole, and the other three countries, they’re all squashed in to the very bottom of the chart.  Africa continues to be the least affected continent in the world.