I hope you had a fun day today, and that Covid won’t end up having been an unwelcome guest at any of your celebrations.  I am somewhere between bemused and worried at how our nation has almost completely developed selective blindness or is just willfully refusing to see the reality of now, as of 3 July, 12 days of steadily increasing new Covid cases. 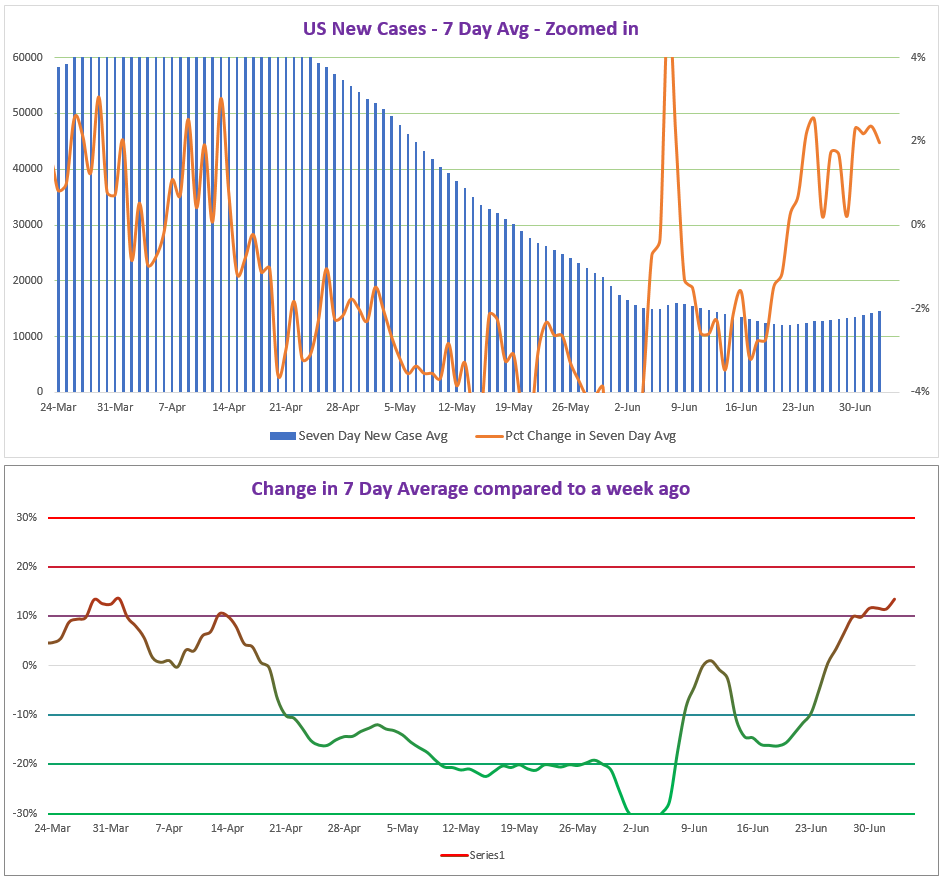 We haven’t beaten the bug.  We haven’t won the war against the virus.  It is coming back again, stronger than ever before in both its Delta and now new Lambda form too, while we’ve “unilaterally disarmed” and are exposing ourselves to the virus more openly than any time since March last year.  Only a few selected specialists are raising concerns, while most of the Press is cheering the return to “normal” times.

Times are not normal while the virus is rising at a rate of 12% growth per week….

As I’d predicted back in May, the objective set by President Biden to have 70% of adults vaccinated by 4 July was not met.  This however is not really something that Mr Biden should be blamed for – he did his part (which basically comprised little more than not changing the plans set in place for vaccine purchases and distribution by the previous administration).  For two months or thereabouts, we’ve had an abundant surplus of vaccines freely available to anyone who chose to be vaccinated, and that’s about the limit of what one can fairly expect of one’s public health authorities, surely. 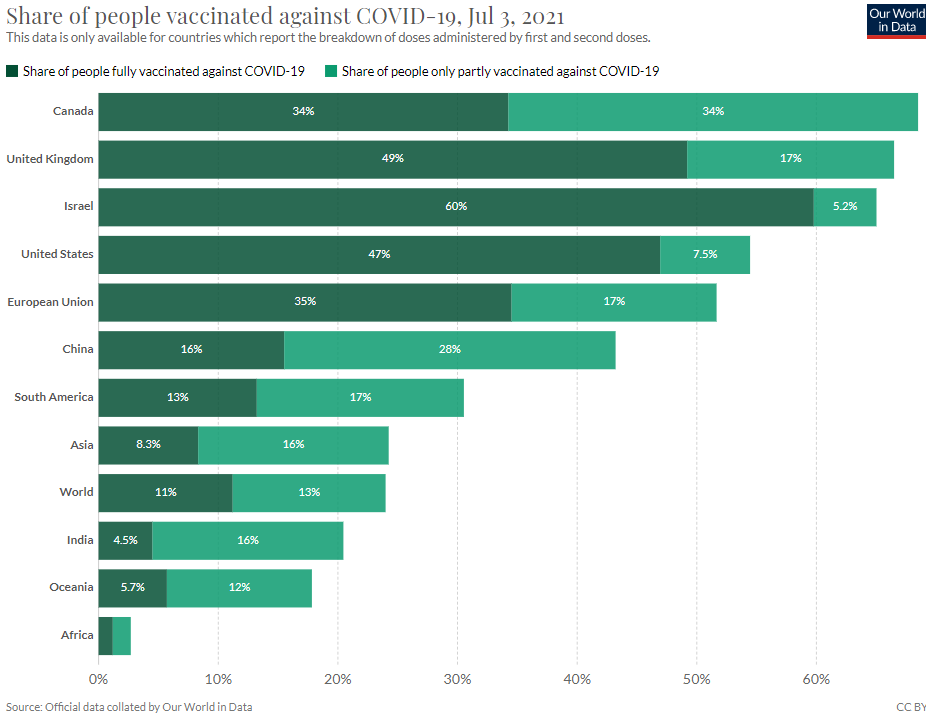 As you can see, depending on whether you focus on getting people fully vaccinated or half-vaccinated, we’ve done better than most of the world. 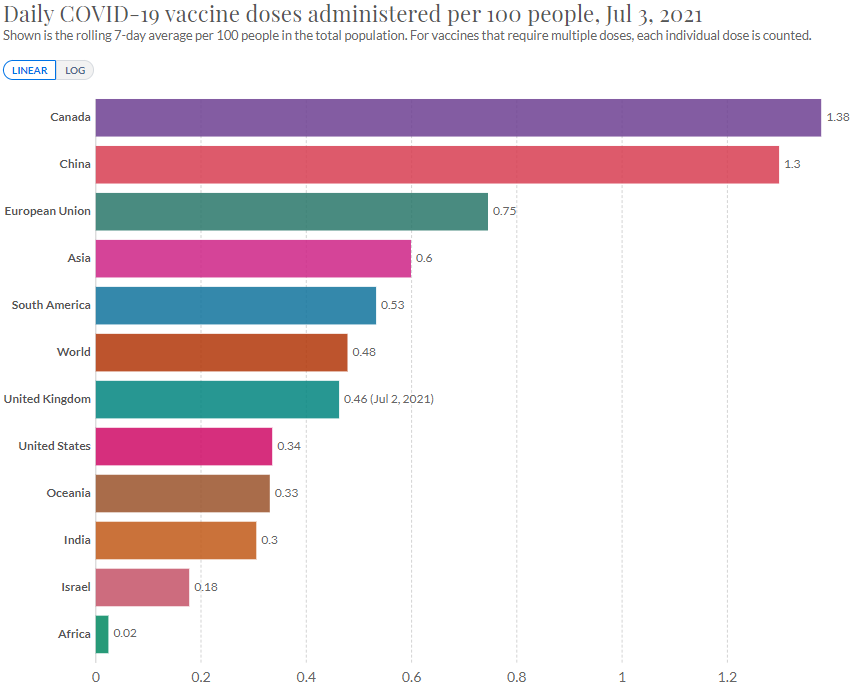 But as this second chart shows, whereas other countries are accelerating their vaccination programs, ours is slowing down.  Canada is vaccinating at a rate four times greater than we are.  The EU more than twice the rate.  South America and Asia, more than 50% greater, and so on.

Is it the fault of anyone other than the unvaccinated that they’ve chosen not to be vaccinated?  Sure, there’s been appalling messages and confusing changes in policies and official opinions about vaccine risks, and in some cases, public health authorities have attempted bribery with various types of incentives, but with generally no lasting improvements in vaccination rates.

On the other hand, however, might the anti-vaxxers have some underlying facts and data to support their concerns?  I seem to be seeing more and more concerning claims about the levels of complications associated with the two mRNA vaccines (Pfizer and Moderna) and I’m not seeing any clear rebuttals and explanations to assuage the concerns being raised.

I’ve never been entirely comfortable with these two very experimental vaccines, nor with any of the claims made in support of them, which is why I chose the Johnson & Johnson vaccine myself.  I’m also very eager to see the new Novavax vaccine complete the necessary paperwork and apply for (and probably receive) FDA approval; that seems like a lovely more traditional type of vaccine that combines great effectiveness with comfortable understanding of the process by which it works.

One of the most dismaying things we’ve learned over the last 18 months is how medical science is as political and subjective as any other topic.  Even the most stately and illustrious of supposedly ultra-impartial “go where the science goes, never mind the consequences” medical journals have shown themselves to be aggressively partisan in their willful dismissal of science, and one of the worst, now, was once regarded as the best of all – Britain’s “The Lancet”, as the linked article explains.

Meanwhile, more background to the origins of the virus has appeared.  One of the reasons put forward by the China-deniers is that the virus couldn’t have escaped because the Wuhan labs are very “bio-secure”.  Well, apparently, that claim is no more grounded in reality as any of the other claims they’ve put forward, as this article explains.

One of the other China deniers, the semi-sainted Dr Fauci, has again been caught in what some might consider a lie to do with paying money to China to do his dirty work.  You might recall he angrily denied this to Congress, a denial that seemed to be based on his paying an American company that in turn then paid the Chinese, allowing him to say he hadn’t paid the Chinese (directly).  Now, let me try to remember, what is the penalty for lying to a Congressional committee?  Something about “a federal crime punishable by up to five years in prison, even if not under oath when lying“…..

And talking about economies of the truth, this article wonders if a major part of WHO’s surprisingly awkward ambivalence about ivermectin’s benefits is because of the conflicts of interest it faces, now that it gets substantial funding not just from national governments but also from third party organizations with vested interests.

Following that trend, there was also only one swap in the death list too, but unsurprisingly, there were the usual swings and roundabouts in the activity last week list.

The weekly activity list again saw a reduction in levels for the most affected countries.  Last Sunday, the UK wasn’t on the list, but this week, it is now at 8th place, with 2,514 new cases per million people reported over the last week, an increase of 68% from the week before.

Europe’s numbers – while good in several countries (Germany down 9%, for example) also shows growing points of concern.  France is perhaps starting to get a taste of the Delta variant, with a 27% increase in cases over the week, the Netherlands had a 36% increase, the Czech Republic and Ireland a 38% increase, Portugal reported 53%, Spain 65%, Iceland 70%, and Greece a 97% increase.

The US had a rate of 1,542 new cases per million, an apparent drop but messed up by incomplete data collected over this special holiday weekend.  The case number should be higher, and the number is actually an increase of more than 10%, according to my estimates, which I’ve developed by studying the numbers, state by state, to “fill in the unreported gaps”.

The most interesting thing about this article is the chart comparing death rates to infection rates. 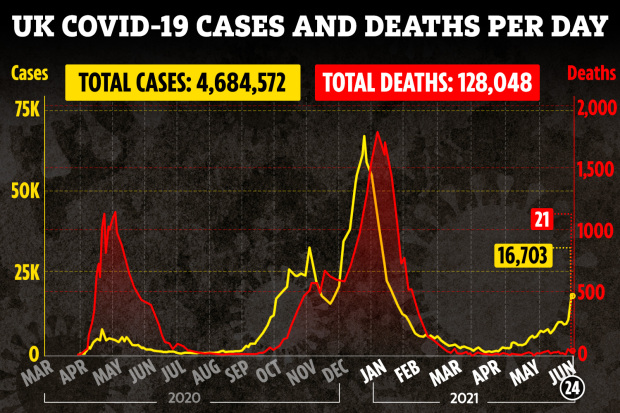 It shows numbers for the UK.  You can see the first “wave” had deaths very much higher than cases, the second wave had the two matched (albeit on different scales) and this now possibly third wave has deaths very much lower.  The chart suggests zero, the actual count, averaged over the last week, is 17 deaths/day.

The UK government is seizing upon this to suggest that Covid no longer matters.  But deaths are not the only relevant measure of the impact of Covid.  There are all the long-haul sufferers, and all the other people who had the virus, and have been “cured”, but now have lasting damage to their lungs, their heart, their brain, their sense of smell, and assorted other bodily functions, almost certainly meaning they’ll die earlier than otherwise would be the case, and will be in a reduced state of health prior to that premature death.

We know that a qualification for being a senior government official is to be able to talk in riddles and at length, but actually to say nothing.  By such measures, what the CDC director says here, “clarifying” mask guidance after WHO contradicted her earlier statement, shows she is much better suited for her job than other aspects of her performance to date might have otherwise suggested.

Some bad news – our pets are at risk of catching Covid from us.  But, happily, some good news.  It seems that Covid doesn’t affect them too seriously.

Well done, Zimbabwe – the country has now fully authorized the use of ivermectin as a Covid treatment.  It has been suffering strong growth in Covid cases, we’ll have to see if it can get IVM out to everyone and knock its infection rate on the head.

Unfortunately, Zimbabwe is also forced to accept a Chinese vaccine, which this article suggests might be doing as much harm as good.

And this study shows that IVM is even more beneficial in controlling Delta variant Covid cases.  That’s a great relief.

Will we need a vaccine booster or not?  I’m seeing articles that say “yes” and others that say “no” – or at least, which say there’s no need for them yet.

This is another point where the pharmaceutical companies are not our friends.  They’re in the business of selling vaccines, so it is reasonable to assume they’ll urge booster shots, whether we really truly need them or not….

Happily, this article suggests that the Johnson & Johnson vaccine actually gets better and better over time, rather than weaker and weaker (and works well against the Delta variant).  I’d be happier if the sample sizes in the study were larger, but any news is good news.  It might assuage some of the irrational fears of some people who have had the J&J vaccine, and now are panicking because it is a single-shot vaccine rather than a two-shot vaccine.  Newsflash – a vaccine’s effectiveness is not measured by the number of shots you need to take of it.

This article uncritically reports on some of this irrational fear.  If anything, it almost encourages people to go get more and more vaccines – big pharma must be delighted.

Here’s a good article about current vaccines, their effectiveness, and their side effects.

This is an interesting article, headlined “The present COVID-19 vaccines violate all 10 tenets of the Nuremberg Medical Ethics Code as a guide for permitted medical experiments“.  Food for thought…… 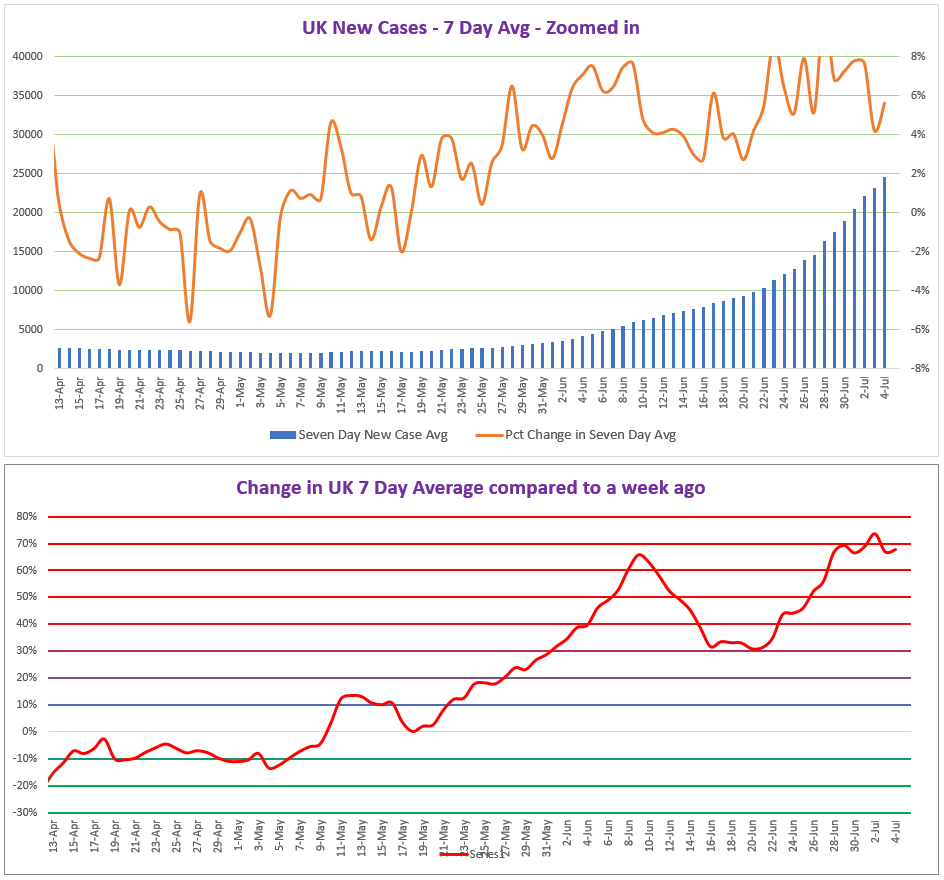 As you can see, there are similarities, but look more closely.  Whereas the US numbers show rates of change going up to just over 10%, the UK scale is different, and it shows rates of change exceeding 70% – to put that in English, in a single week, the average number of new cases a day increased by 70%.

I’ve no idea why the UK is more volatile and shows greater rates of change than the US.  But it is interesting.

Here’s a headline that is simultaneously of little significance but also a taste of things to come.  A one day statistic means nothing, it takes a week or more to start to see a significant trend, but even so, it may be a first glimpse at headlines we’ll start to see breaking out all over the country as the Delta variant starts to take hold.

It is certainly difficult to reach a balance between “significant economic benefit” and “significant Covid risk”.  But there’s another challenge too – how to decide which firms are more important or more deserving of exceptions than others, as this article looks at.  Whether it is in the UK or US, sometimes it seems firms might be getting special treatment more directly proportional to their lobbying budget than their actual fair need.