We’re living in a strange and bizarre world where countries are ignoring their growing Covid case numbers and claiming to have won the Covid battle.  The UK continues to record ever-higher number of new Covid cases, but is refusing to budge from a re-opening timetable set months ago when Covid numbers were dropping, vaccination numbers were rising, and it seemed possible that Covid was indeed being vanquished. 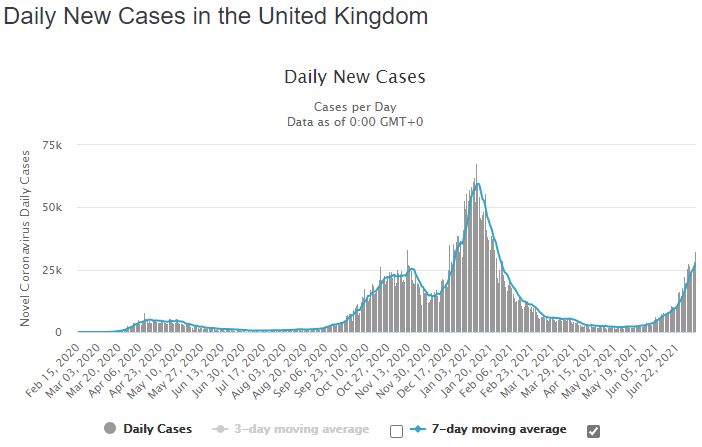 But then the Delta variant became an issue, vaccination rates stopped, and Covid numbers started implacably rising again, as can be seen – indeed, it is impossible not to see.  The British response to this?  Pretend it isn’t happening.

So, for perhaps the first and probably only time during the entire pandemic, I find myself agreeing with WHO when it warns of the “epidemiological stupidity” of early re-openings. 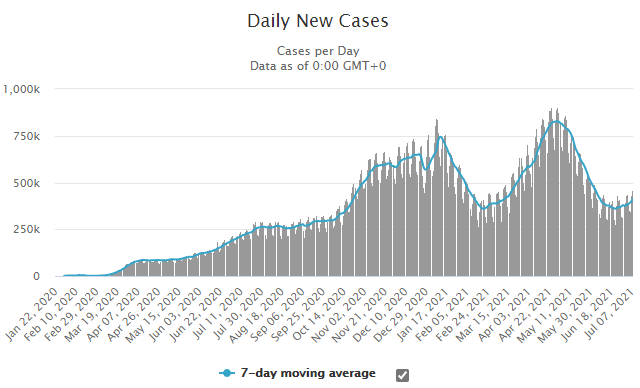 As you can see, new Covid cases are rising once more globally.  This battle is far from finished.

I’ve written about quercetin before as another type of cure for Covid.  There have not been many studies done, but the few that have been published are encouraging, and as a freely available “dietary supplement” it seemed like a great extra thing to have available.

Here now is a somewhat peer reviewed article claiming astonishing results from quercetin.  The trial is sadly small in size (152 people), but the difference between the study control group and the quercetin group is so strong as to make the results significant anyway. 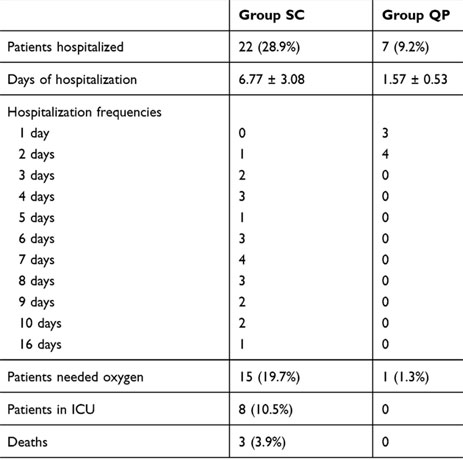 I do see that five of the 19 authors have involvements with promoting quercetin in some form or another, so the study may have been biased, but short of lying about the outcomes, any such bias isn’t immediately clear to me, the way that sometimes bias is obvious in other testing scenarios.

The key difference between this study and other studies is that it is using a form of quercetin that is more readily absorbed into one’s system than plain/regular quercetin.

I’m trying to track down a fair-priced source of this high-bio-availability quercetin.  I’ll let you know.

The last week activity table saw the country at the bottom last week, in twelfth place; soar to top place this week.  The UK moved up two more places, recording a more moderate 36% increase in new cases over the last week compared to the week before.  The US showed a rising 15% increase in cases compared to the week before, with a still very moderate 336 new cases per million people over the week.

If you’re like me, you might be finding it hard to keep up with all the different Covid variants that are out there these days.  The Greek lettered/named variants are only some of the totality, and new ones are being added – for example, as well as Delta (the one everyone is talking about at present), there’s now a Delta-Plus variant too.

And also a Lambda variant.  Some sources are describing it as the most infectious of them all (to date).  But if that is so, there are some puzzling contradictions about how/why it has been so slow to spread and displace other “weaker” virus strains.

Here’s an article that raises as many questions as answers about the Lambda variant.

There was a new ivermectin study released this week that showed disappointingly weak results.  However, it turns out there were problems with the study – most notably, for using too low a dose of IVM (and also for finding study participants that hadn’t already been using IVM, either for Covid or for other ailments).  Analysis is continuing.

One of the awkward things about the modern world we live in is the rise of new types of crime and problem that were unimaginable, both in form and in severity of consequence, even just a decade ago – most notably computer ransoming.

But a bit like the dog that didn’t bark, while there are plenty of stories now of computers being hacked (actually, the hacking revolves around tricking users into revealing their passwords) and ransomed, we seldom stop to think about the key computer systems that haven’t been hacked.  Here’s an interesting story about how the companies making precursors and raw materials/supplies needed for the Covid vaccine programs were protected by a US government task force.

Do you remember, a month or so back, states were starting to “encourage” (perhaps better to say “bribe”) people to be vaccinated, even to the extent of some very generous lotteries.  It seemed, for a while, that the incentives were working, because there was a brief rise in vaccination rates.

But this article points out the brief rise coincided not only with the incentives, but with expanding the vaccine availability to 12-15 year olds.  The incentives had no measurable effect at all. 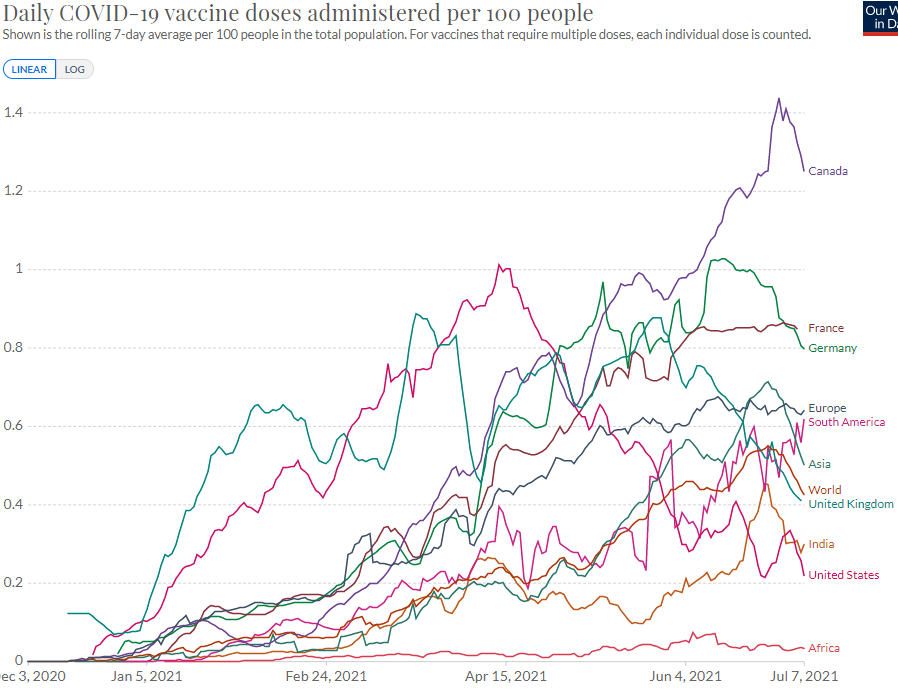 As you can see, just about everywhere in the world is now experiencing falling rates of vaccination (and rising rates of new Covid cases).

Singapore has decided the best approach to the virus is to ignore it, and so will stop counting and reporting Covid cases.  While it is true their virus experience has been very light compared to most of the world, just ignoring it doesn’t seem an ideal strategy for the future.

Here’s an interesting article about the search for “patient zero”.  China’s obfuscation pretty much ensures we’ll never know who or where that person is/was, and while it would be academically interesting to know, the reality seems to be that China will experience very little consequence for whatever degree of culpability it has for the pandemic, so is there really a point in finding patient zero?

We expect this article – reporting on a rise in new cases in California – is merely the first of many as, state by state, rises start occurring.  What is interesting though is the article, recently published, was quoting an average of 1,143 new cases a day in California; on Wednesday it had risen to 1,618 a day and now it is 1,671 a day.

Britain is justifying its policy – to learn to live with Covid and to accept the deaths – as making sense, due to the very low increase in deaths compared to the rapid rise in cases.

It is interesting how countries can be selectively accepting of deaths from some “acceptable” causes (apparently now Covid) but other “unacceptable” causes (global “warming” for example) are considered so serious as to be worth sacrificing many modern comforts and conveniences to minimize.

Plus, as we say every time in response to such policies, it isn’t just the deaths that matter.  How about the “long Covid” sufferers, the people with permanent heart and/or lung damage, permanent brain damage, or, for men, ahem, erectile dysfunction?  As many of us know from personal experience, death is not always the worst thing that can befall a person.

What makes it all the more ridiculous is that at the same time this policy is being instituted – apparently to just sit back and let Covid run its course – there are still things like their National Health Service smart phone app that advises people if they might have been in contact with a possibly infected person and requires them to then go self-isolate for some days, “just in case” they might be infected too.  Rather than being helpful, it has become so disruptive and so likely to be generating false alarms that many people are deleting the app off their phone.

It seems Canada is inching forward to reopening the land border with the US, but as to when it will be fully/properly open, that remains unclear and a guess.

I guess a beauty pageant would look strange if the contestants were in high heels, bikinis, and masks.  So maybe it not surprising to note that half of all the contestants in the Miss Mexico contest have now tested positive for the virus.