The Chairman of Tokyo’s Medical Association made a public statement to announce his support for ivermectin use for all Covid patients.  But you probably didn’t read that in any mainstream media outlet, did you.

At least the gentleman didn’t get in trouble for supporting ivermectin, which is more than could be said for Maui’s District Health Officer, as this article delightedly reports.

Here’s a way to immediately tell if an article is fairly covering the ivermectin issue or not.  If it refers to the Nobel prize winning medicine, on the WHO list of essential medicines, and safely used by millions if not billions of people world-wide for decades for a number of ailments, as “the veterinary dewormer” then you know you’d dealing with a dishonest biased hit piece – and if you’d like an example of such a piece, the immediately prior linked article is one such example.

French Polynesia moved up one in the minor country list, with Georgia displacing Aruba for the bottom listing.

The UK moved up one place in the major country list, with Brazil falling one.

No changes in the death list, although Mexico’s massive growth continues, suggesting it may overtake Poland within the next week, and the US might also do the same.

Canada’s cases continue to increase, this week with a 25% lift, and Mexico had an 11% drop.  The world as a whole had a 4% drop in cases. 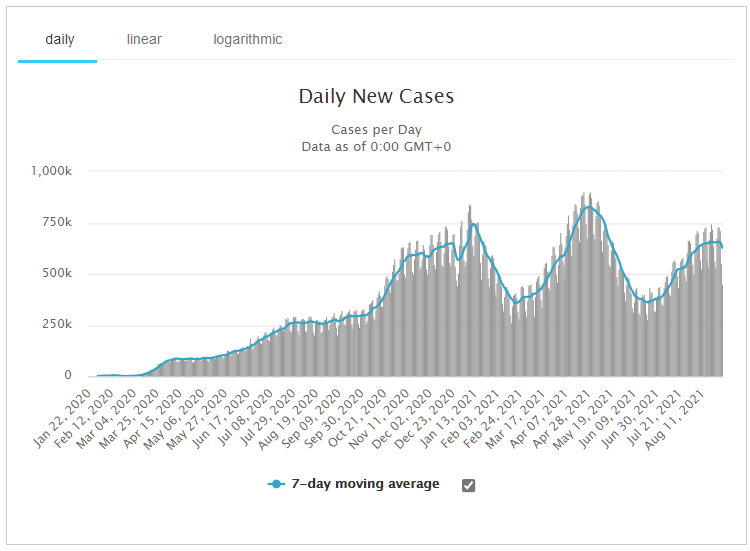 I am curious how it is that the seemingly unstoppable Delta variant, which has seen US cases rise to a level 12 times that of a couple of months ago, and UK cases rise over three months to a rate nearly 20 times higher, has been so “gentle” on the world as a whole.  As you can see, world cases have not even doubled during the same time frame, and if we were to take out the effect of the now 185k cases/day in the US and UK alone, the rise would be even more gentle.

This is another one of the many counter-intuitive puzzles about the virus.  Why is it currently disproportionately affecting the US and UK?

Here’s another encouraging low-cost Covid treatment using an “off the shelf” drug.  Noting how it gets people off supplemental oxygen within a week, you’d think that doctors in Florida who are now referring to the “talking dead” Covid sufferers they can’t get off oxygen would be interested in it.

But you’d also think the doctors would also be interested in low-cost safe early treatments that keep patients from needing oxygen in the first place – you know, treatments like ivermectin……

A reader wrote to me excitedly telling me how he managed to talk a doctor into giving him a prescription for ivermectin.  He then went to Walgreens to get the prescription filled.

Walgreens told him that 50 tablets would cost $300 ($48 per dose).  But, believe it or not, that outrageously inflated price was the good news.  There was bad news, too.  They refused to supply it, even though agreeing the prescription was valid and the doctor real, etc.

Walgreens knows best, apparently…..  Makes you wonder why we even need doctors in our lives at all, when the pill-counters at Walgreens can overrule them whenever they feel like it?  Our opioid crisis could be solved in a single day if the pharmacists refused to fill all the prescriptions for oxycontin and similar drugs – so why is it the pill-counters have decided to take an apparently illegal stand against ivermectin (which no-one has ever died from) while turning a blind eye to opioid prescriptions (50,000 people a year die from opioid overdoses in the US alone)?

Seriously, what it is that is so special about ivermectin that blinds sensible people to the clear evidence in support of it, drives the media to slang off at it as animal medicine, and now has pharmacists refusing to fill physicians’ prescriptions?

Here’s news of yet another Covid variant becoming recognized, more mutated than any previous one.  This is not surprising.  We’ve been told that because there are so many Covid cases in the world at present, the virus is mutating much faster, due to the increasing number of opportunities to do so.

TThat is half true.  But there’s another half to that analysis, which is not being so loudly spoken about.  Think about what you’ve always been taught about antibiotics – you want to be sure to take a full course of antibiotics, because if you only take half of them, you are helping the surviving bacteria to develop a resistance to the antibiotics.  The truth of that statement is evidenced with the growth of super-bugs that are increasingly resistant to almost every antibiotic we have.

Unfortunately, it is very much the same thing for vaccines, too.  A vaccine that kills of most but not all the virus particles inside us (e like all the current Covid vaccines) provides an “evolutionary pressure” that encourages the virus to mutate into a form that is vaccine resistant. 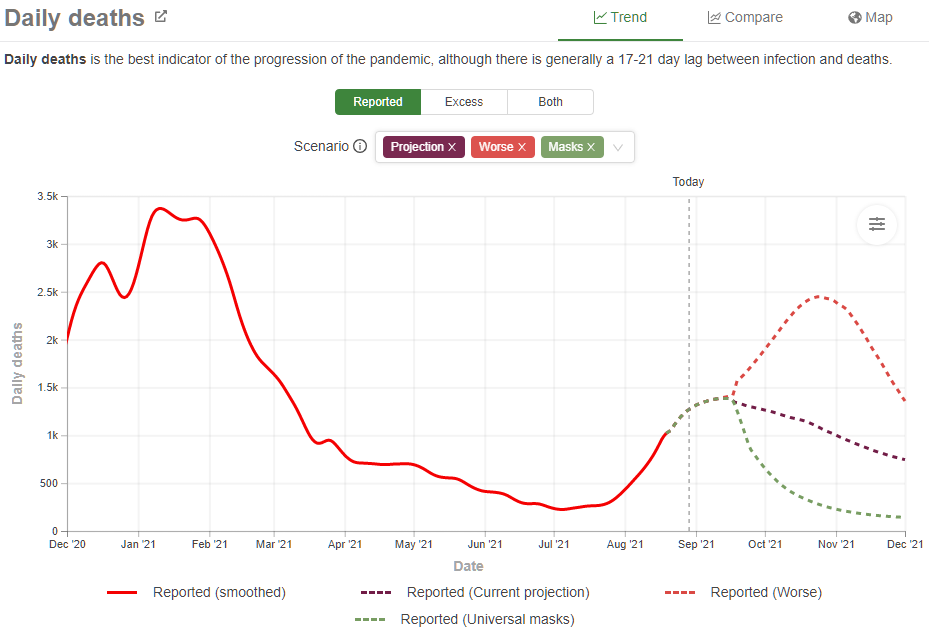 While we agree that mask wearing has an appreciable impact on death rates, we feel that creating this projection is simplistic and gives too much focus on mask wearing, and too little focus on other factors.  How about social distancing?  How about vaccination rates, and whether or not third jabs are administered? 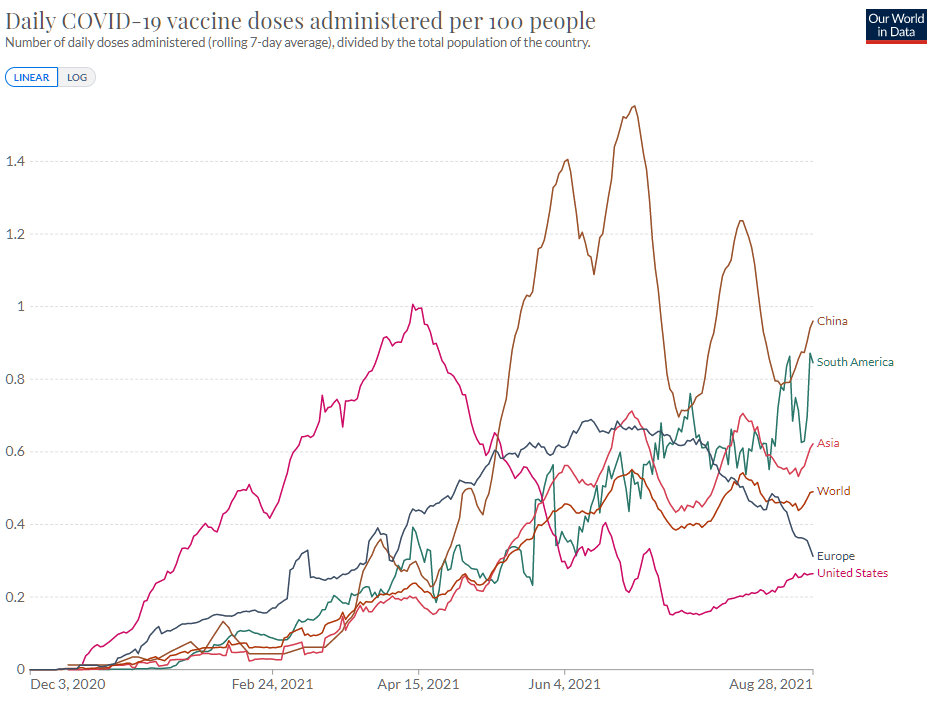 Talking about vaccination rates, this chart clearly shows how our earlier lead on the rest of the world has been lost and now we’re vaccinating people at a lower rate than most other countries. 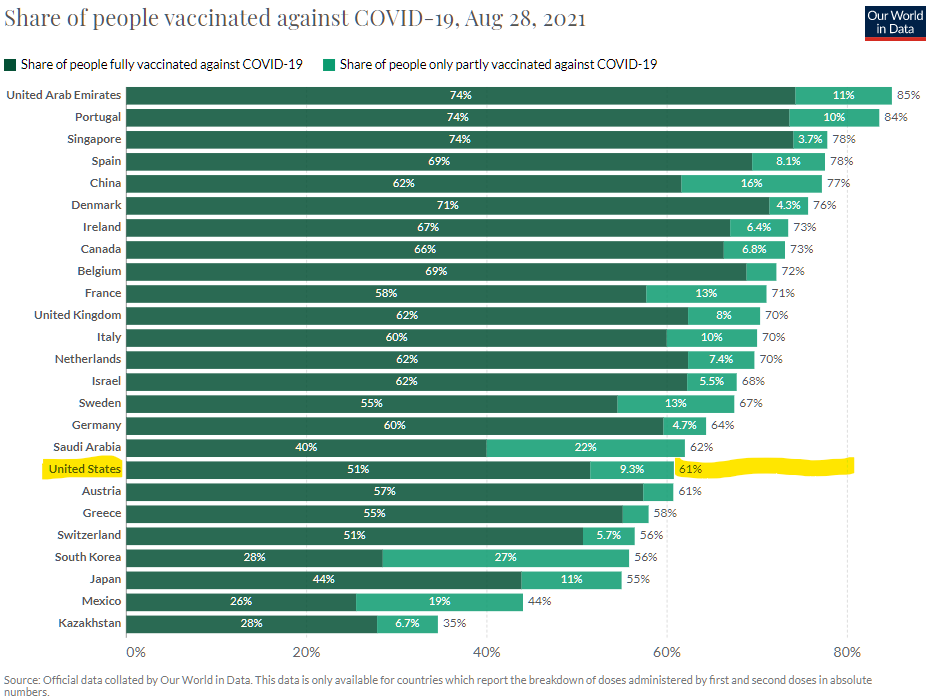 In case you think the reason for our fall in vaccinating is because we have already vaccinated just about everyone, this second chart shows that not to be the case.

Here’s an interesting study about how a class of elementary school students in Marin County (just north of San Francisco) saw half the class infected within a week, starting with the teacher (who unfortunately was not only unvaccinated but also continued to teach after feeling unwell).

IIt is interesting to see how quickly so many of the children became infected, but also puzzling how/why the other half of the class avoided infection.

Denmark says they’ve beaten the virus..  The virus says “Hold my beer”.  Covid cases in Denmark are currently running at a level almost five times higher than in early July.

The concept of having beaten the virus seems to be leaking out elsewhere, too.  This UK ail Mail article refers to the Queen returning back to work full-time “following the pandemic“.  As mentioned above, UK case rates are nearly 20 times the rate they were in May, and have been continuing to gently rise almost every day in August.

Qantas is feeling optimistic too, and anticipates being able to restart service to “low risk countries” in December.  So what countries does it consider will be llow-risk in December?  The UK and US.

The latest shortage is impacting Elon Musk’s ability to launch more of his Starlink internet satellites – a shortage of industrial grade liquid oxygen to power his SpaceX rockets.

Has the science changed that much, that quickly?  Or was it wrong before?  Or is it wrong now?  Or is the real truth that there is not really any science underpinning this at all?

The head of the CDC, after utterly failing at Covid control, has decided to switch the focus of her agency to something else entirely.  She has decided to now focus on gun violence.

Of course we’d all love to see a fall in the rate of gun violence, most of which is caused by minorities shooting each other, a truth that of course we are expected to pretend not to be so.  As a result, all too often, gun violence, instead of targeting the “at risk” groups, becomes a synonym for attempts at across-the-board Constitutionally protected gun control.

Perhaps Dr Walensky could impress us first with her ability to understand and solve the Covid crisis.  Instead, she and her agency continue to do exactly and totally the wrong thing – the CDC’s main contribution this last week has been to warn people not to take ivermectin.

New Zealand is currently in a national lockdown as it tries to free itself from its new outbreak, which has now grown from one initial case to 562 cases in 20 days – an astonishing rate of growth, all the more so due to the country’s national lockdown.

Like most other places in the world, of course, strict lockdowns aren’t universally welcomed, and there was a protest held in NZ’s largest city, Auckland, a few days ago.  One person attended.