This has been an interesting week, with some of the myth of the mRNA vaccines being exposed for all to see.  The key revelation was early in the week, with a new study from Japan suggesting the Pfizer vaccine’s effectiveness fades down to almost zero in six to seven months.

Other studies have also shown differing rates, but often also faster-than-hoped-for fading in immunity.  On the other hand, this article, clearly being a “setting the scene for the big announcement” claimed the vaccine merely declined from an initial 96% effectiveness to an 84% effectiveness after six months.  Maybe that is true, but if it is true, how and why was the article also talking about the need for booster shots?

Which brings us to the official announcement on Wednesday that all people vaccinated with the mRNA vaccines (Pfizer and Moderna) can get booster shots eight months after their first pair of shots.

Why eight months?  Why not nine?  And, for that matter, why not seven?  Shame on us for asking such impertinent questions – we are apparently expected to “trust the science” and the experts who understand it.

What follows is not a rant against vaccines in general.  Rather, it is an expression of disappointment about two specific vaccines and their now demonstrated performance.

One definition of insanity is doing the same thing over and over, but expecting different outcomes.  It seems clear these two mRNA vaccines have failed to live up to their expectations – either in terms of effectiveness, longevity, or safety.  If the most we can get from two shots is eight months of coverage, why are we expected to line up for a third shot of an experimental vaccine with concerning side effects?  There are not only the discussed and known short-term risks of these vaccines, but a couple of worrying longer term potential outcomes too which are almost not discussed at all in the popular press.

Will we need a fourth shot in another eight months time, and so on for ever after?  (And please keep in mind that even during the eight months between shots, the vaccines have been far from 100% successful by any and all measures.)

The current situation is far different from what we were told to celebrate and eagerly anticipate, back in December last year.  Yes, certainly, the Delta variant was little known then, but the concept of virus mutations was definitely understood.

Why is no-one prepared to say the Pfizer and Moderna vaccines are unsatisfactory and stop pushing them at us as aggressively as is the case at present?  Instead, we have articles such as this one – sure, it talks about vaccine “breakthrough” cases rising (20% of July cases in the two largest counties in WA state were in vaccinated people), and – yes, now we need booster shots too – but does the article ponder the value of these two vaccines?  No, it unquestioningly accepts the continued advocacy for these two vaccines in particular.

There are now claims about the “proper time between shots” being much longer than the official three and four weeks that were calculated by the vaccine developers and approved by the FDA, but as far as I can see, no hard evidence supporting any of these claims, merely an unstated acknowledgement the vaccines are failing and therefore it must be due to too short a period between shots.

There must have been a reason Pfizer insisted on 21 days between shots and Moderna insisted on 28 days.  Some apologists say “we were in such a rush to get the vaccines approved there wasn’t enough time to thoroughly research this”, but does that make you feel comfortable and confident about the vaccines?  If correct, what else wasn’t there enough time to research as well?  Where were all the disclaimers at the time they were approved “Well, we really don’t know if this is right or not”?

As I said, this is not a rant against vaccinating in general.  Because I remain keenly pro-vaccine (if they are effective and safe), I therefore ask, why aren’t we resurrecting Operation Warp Speed and getting new vaccines developed?  There are almost two dozen vaccine candidates in the final (third) stages of clinical trials, including some “real” (in the sense of traditional) vaccines – how about chucking millions of dollars at each and every one of those to speed up their trials and get results and requests for approval soonest?  There’s no need to even stop after that.  There are dozens more vaccine candidates in the first two stages of trials – maybe place a few bets on some of those, too.

It seems ongoing well-funded research into better vaccines – something that surely should never have stopped, and which now is being shown as more important than it was six months ago – is being strangled due to over-reliance on the Pfizer and Moderna vaccines, and of course, those two companies have no motivation to encourage competitors to get new better vaccines approved.

New Zealand had bad news this week, when a person from Australia managed to get into NZ, through screening, and with a Delta variant infection.  This ended six months of the country being totally virus free.

When the first “community case” was detected on Monday our time/Tuesday NZ time, within hours a total tight lockdown of the entire country was announced.  Other nations looked on in stunned amazement that a country would lock everything down upon the discovery of a single case.

But within a day, that one case had grown to 11, and now is in the low 30s, with projections suggesting that if all goes well, it might rise to somewhere between 50 and 150 cases (don’t ask about the “very bad” scenario).  The first case was in the Auckland area, and now cases have been detected in the Wellington area, 400+ miles to the south (a family that traveled to Auckland then returned back home to Wellington), highlighting how quickly the virus can spread if there are no controls.  New Zealand has a low vaccination rate (20% fully dosed, another 15% half way through) and due to the virus-free nature of the country, there had been no controls to slow down the virus spread.

Will their lockdown work against such an aggressive spreader as the Delta variant?  We’ll probably know by this time next week.  If it does work, all other countries should wonder why they’ve never been willing to do the same thing.

It has been a long time coming, but finally Andorra has been displaced from the top of the minor country list, that “honor” now going to the Seychelles.  Some other minor swaps also in that list, and at the bottom, Slovenia drops two places, right off the list, with French Polynesia (ie Tahiti) appearing.

France moved up two places in the major country list.

In the death list, the US had twice the rate of deaths per million people during the last week as did the UK, so rose up one place.  The UK dropped off the list entirely, with Mexico now in tenth place.

In the list of most afflicted countries for the last week, the US is now on the list, and the UK has moved up a couple of places.

Georgia remains in first place, with a very high level of activity, but I’ve not seen the types of articles that other countries have featured in talking about Georgia’s “apocalypse”, even though its rate of new cases is massively above that of Africa or India in the past, both of which have been prominently featured in such fanciful stories previously.

The UK showed a mild 8% growth in new case rates while the US had only a slightly higher rate of growth – 10%.  Europe as a whole had a 2% rise, with Germany at the top of well-known countries with a 62% rise, followed by Switzerland and a 61% rise, and Austria with a 53% rise.  At the other end of the scale, Spain had a 28% drop, and France a 4% drop.

Another low-cost off-the-shelf-drug is showing encouraging results as a Covid treatment, this time a cholesterol reducing drug.  More research is needed, of course, but initial results seem positive.

A substantial hassle, if you’re traveling to Britain, is a need to get a second Covid test a couple of days after arriving in the country.  It is possible to understand the reason/justification for this test though, so one is tempted simply to comply with good grace.  But that positive attitude sours when one learns that apparently most of those test results are being ignored, even if they return a positive result as a likely-to-be-infected person.

Yes, that is stunningly remiss of the authorities.  Details here.

The TSA has announced an extension of their rule that passengers on planes and other public transport must wear masks.  It had been due to expire on 13 September, and now remains in effect through 18 January.

One wonders exactly how it is the TSA is now able to rule on public health matters.  Mission creep?

Talking about mission creep, there is a continued series of calls for removing insured healthcare cover for unvaccinated people who get infected by the virus.  That pressure has been notched up another step here in Seattle by the University of Washington Medical Center announcing it has taken a heart transplant patient off its waiting list because he refuses to be vaccinated, and demanded a liver transplant patient be vaccinated prior to undergoing the procedure.

My concern is that such well-intentioned moves are likely to grow way beyond the initial issues.  How long before medical care is only given to people who support and endorse whatever the latest round of politically correct craziness may be, because people with dissenting opinions are harming the planet, preventing equality, and so on?  We’re not too far removed from that already – try standing up in your company’s workplace and saying “I don’t think black people should be promoted because of their color rather than their aptitude” or “I don’t think there are more than two genders” and see how long you stay employed. 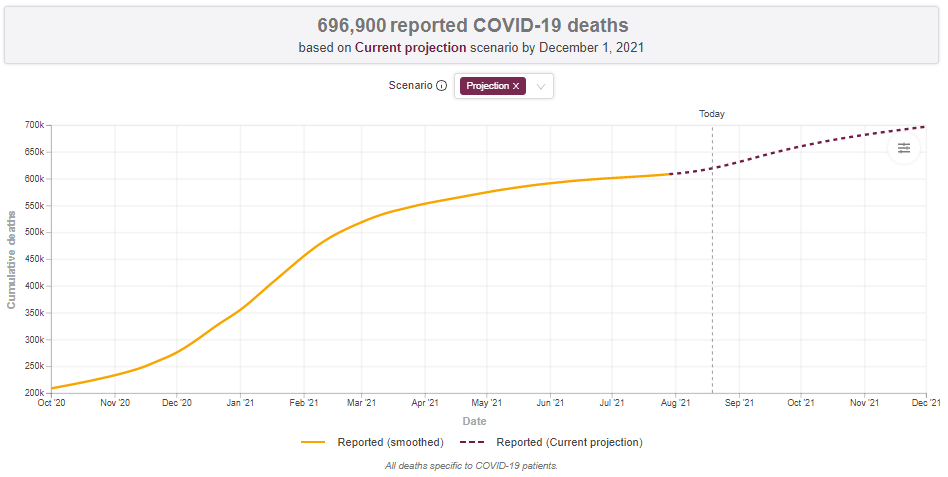 Providing another perspective on the question we’d been considering the last week or so – when will this all be over and things be back to normal, is this projection on US deaths from IHME.  It only goes through December 1 this year, but suggests we’ll have almost 700,000 Americans dead of the disease by then.  The current count is 643,112.

This poll suggests that nearly two-thirds of all Americans support mask wearing rules.  You’d not think it, based on the coverage the dissenting one-third get!

Call me low-brow rather than high-brow, but I’ve been eagerly waiting for the new James Bond movie, now for over a year while MGM tries to find a good time for a theatrical release.

It is starting to seem their current scheduled release date (October 8) won’t actually eventuate either.  Not MGM’s fault, of course, but a frustration to me and my fellow Bond enthusiasts, and a frustration being shared by many other new movies that are also being held back.  This article discusses.

Oh no, not a toilet paper shortage again!  Apparently Costco is running low on toilet paper once more.  It certainly isn’t due to me panic-buying at present – I still have an abundant supply and haven’t bought any in over 18 months!

More perplexing to me though are shortages of bottled water.  I can not, for the life of me, understand why people can’t just turn on their tap and drink tap water.  Tap water is subject to all manner of quality controls and testing.  Bottled water, which often comes straight out of a tap anyway, can sometimes be totally free of all such inspections.