President Biden got tough on requiring people to be vaccinated last week.  Or did he?

For example, if Biden was truly serious, why didn’t he make being vaccinated a requirement for interstate air travel?  Wouldn’t that be an appropriate additional “trigger event” for requiring vaccination?

Instead, all we’re told is the White House “doesn’t rule out” possibly requiring vaccination or test prior to domestic flight in the future.  Why the delay?  We’ve been stuck in this Covid crisis for 20 months, and under two presidencies and administrations.  How much longer do we have to wait for someone, anyone, to assertively take control and get us out of this mess?

As has consistently been the case, our country’s leadership, at every point, seems to back away from a firm clear commitment on anything to do with the virus.  Why is the government pussy-footing around with a virus that is killing 10,000 people every week?

As a topical reference, after a single event on 9/11/01 that saw the deaths of 2,977 people, the government rushed to embark on 20 years worth of wars around the world, often with only weak or even no relation to the 9/11 attacks, and spend tens of trillions of dollars in the process.  But now we’re losing that many people every two days, over 678,000 thousand deaths in total, there’s little agreement on what to do or how to do it.

Instead, we get confused and contradictory shifting messages about the virus, the vaccine, masks, distancing, how the virus spreads, and everything else.  President Biden now tells us it is necessary to be vaccinated so as to protect vaccinated people from unvaccinated people.  But isn’t the vaccine itself supposed to give us that protection?  Aren’t we vaccinated people already protected?  If we are not (and, yes, that increasingly seems to be the case – with risk appearing in more or less equal measure both from unvaccinated and other vaccinated people), why require others to vaccinate if there’s little or no benefit?  (Yes, I know vaccinated people are less likely to die, and that’s great, but it is also greatly underwhelming compared to the original promises of fast vaccine-based herd-immunity that we were being promised this time a year ago. 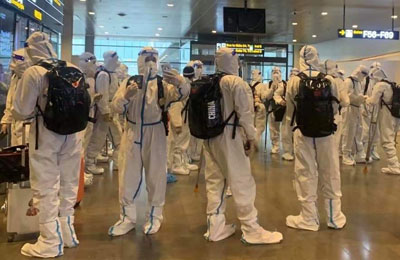 Talking about protecting people, and noting varying opinions about face masks and social distancing and other requirements, the picture you see here is of the Chinese para-Olympic hockey team arriving in Sweden.  Is this overkill, or is this what is really truly needed?

And talking about difficult to answer questions, here’s Dr Fauci stuttering out an incoherent reply full of waffle and lacking in substance when asked a very simple question that surely should be one to which there is already a definitive answer, rather than a confused reference to needing to look into the matter in the future.

The question was whether or not people who have already had a Covid infection need to be vaccinated, too.  Dr Fauci’s answer, before the waffling set in was astonishing :

You know, that’s a really good point, Sanjay. I don’t have a really firm answer for you on that. That’s something that we’re going to have to discuss …..

Twenty months in and they still need to discuss the value and longevity of natural immunity?  Now that one in every eight Americans has had a Covid infection (some people suggest the number to be much higher) isn’t that an important thing to understand?

Why is it that the government’s single-minded strategy seems to be to get the maximum amount of vaccine into the arms of as many people as possible, whether it is needed (or wanted) or not, and no matter how well (or poorly) it works, or for long it remains effective?

Here’s a great article :  ‘Get Sicker’:  Anatomy of a Failed Policy.

Talking of great articles, if you missed my mentioning it on Thursday, please do read this brilliant and clearly written article, ‘The great ivermectin deworming hoax‘.  Send the link to your doctor.  If he disagrees with ivermectin, maybe this will change his mind, and if he does agree, maybe this will encourage him to be braver and bolder in voicing his support.

As another example of the deworming hoax in action, the Mississippi Poison Control Center issued a statement that was poorly worded/ambiguous, and which may have implied that 70% of all calls it was receiving were for people suffering from taking “horse dewormer” type ivermectin.  The actual number was 2%.

The problem is the headline claim of 70% was then taken up and repeated, without any clarification or correction, by other media, including some with very loud voices, such as the NY Times.  Almost no-one reading an NYT claim that 70% of calls were for ivermectin related poisonings is going to think twice, or try to find/confirm the source of that claim.  Then the NYT article gets cited to “prove” the claim by other media, and so on, and the myth has taken on an undeserved and seemingly validated life of its own.

The list of countries with the greatest rates of new Covid cases last week saw generally lower numbers of new cases per country.  In Europe, cases overall dropped 3% for the week, with Spain seeing a 45% drop, Portugal a 29% drop and France a 27% drop.  The Czech Republic is seeing its new cases rise, with a 55% increase for the week (the same as Slovenia), Serbia had an even higher 68% rise, and Slovakia almost doubled with a 95% rise.  Germany finally turned the corner with a 0.4% drop, although neighboring Austria still has cases rising 20%.

Canada’s cases stopped their steady rise, and dropped 24%, and Mexico’s cases dropped a more modest 7%.  The world as a whole enjoyed a substantial 15% drop in cases.

I mentioned, above, how Dr Fauci reacted with surprise to a question about the value of natural immunity and the protection it gives against subsequent Covid re-infection.  Here’s an article that looks at the issue some more.

The value of natural immunity is something the “experts” have waxed and waned on, pretty much ever since the first Covid case.  For a while, there was a hope that it would be a case of “one and done” – people who get infected would never get infected again in the future, and the growing number of people who were coming down with a second infection were being ignored, or in some other way discounted as being irrelevant or erroneous.

Certainly, initial uncertainty is understandable, but we should be getting a much clearer understanding now.

I continue to be amazed and frustrated at how astonishingly uncurious most of the medical research (and government funding) communities are when it comes to finding off-the-shelf drugs that can be used as a Covid cure.  This isn’t just the case with hydroxychloroquine and ivermectin, it is the case more broadly with a “conspiracy of silence” and a total disinterest/pretending they don’t exist approach to over 70 different possible treatments.  There are even more treatments not yet making that list, like most of the nine drugs linked to immediately above.

Instead, as the article in the opening comments bemoans, our approach is to let people get dangerously ill at home, and only then, give them treatments, at great cost, both financially and in the sense of unnecessary/preventable deaths.

When the NIH gave a thumbs-down to ivermectin, it unusually refused to divulge who the people were on the panel that reviewed the drug and made the recommendation.  Why would it keep that a secret?

How about because three of the nine people were in “financial relationships with” Merck, a company busy developing an ivermectin alternative; and a fourth was a person who immediately after the decision received a $155 million grant to research ivermectin, a grant that would likely not have been relevant or given if ivermectin was approved?

That sure doesn’t pass the smell test, and obviously NIH itself was defensive about the makeup of the review committee or else they’d not have fought so hard to keep it a secret.  Details here.

It isn’t only the review of ivermectin that ends up as being a disappointing process and open to criticism.  This article picks apart the reasoning (or lack thereof) behind the FDA’s decision to give full approval to the Pfizer vaccine.  In short summary – bad/negative data was ignored/overlooked, and any apparently good data was accepted without querying the data integrity or validity.

If the FDA applied the same standards to evaluating ivermectin, it would have overwhelmingly endorsed it.

Of particular note is the FDA let stand the three week interval between the first and second doses of the vaccine.  An increasing body of evidence suggests that a longer gap gives stronger and longer lasting protection.  Why was this not reviewed and (probably) revised?

Here’s a very surprising statistic.  Cornell University is reporting a five times higher Covid case rate than at the same time last year, even though 95% of people at Cornell have been vaccinated.

Cornell has almost twice the vaccination rate, but instead of a lower case rate, has a 25% – 40% higher rate of Covid cases.  Would someone please explain to me how that fits the narrative of the vaccine working?  That’s almost as bad as Israel and Gibraltar – two countries with sky-high vaccination rates, and matchingly sky-high Covid case rates. 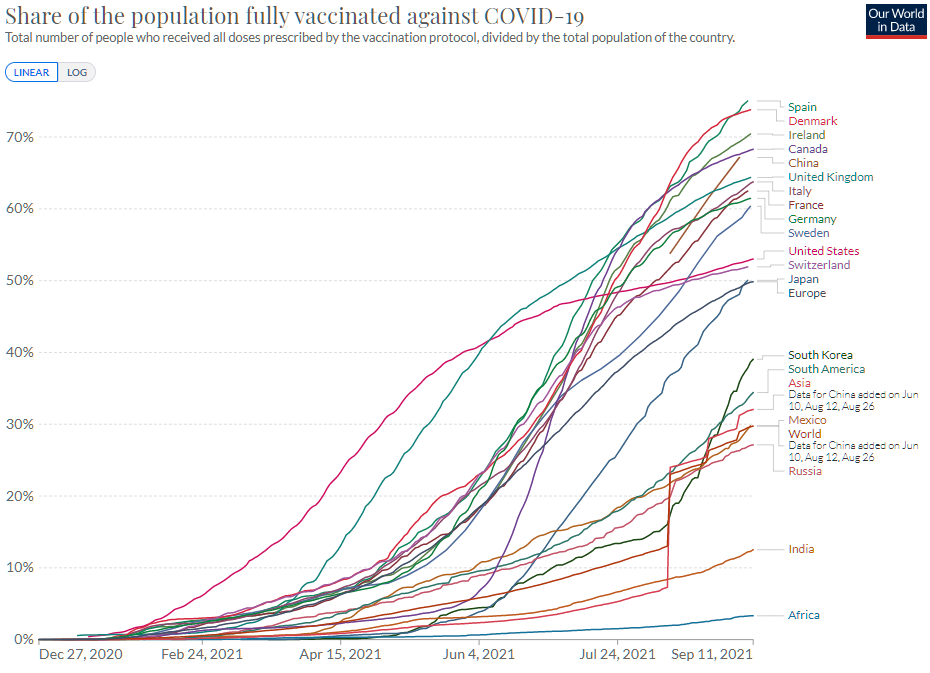 Here’s an update on the fully vaccinated rates for assorted countries and regions.  The world as a whole is now up to 30% fully vaccinated, and we in the US are now at 53%.

This is a list that has not changed since President Biden re-affirmed it.  It makes no sense whatsoever.  Maybe it did in February/March/April last year, but increasingly ever since then it has become more and more inappropriate and wrong.

Almost every country on that 36-country list has lower Covid case rates than the US.  It also again surely makes a nonsense of the claim that vaccines protect us.

How much longer must this national embarrassment continue?  It is not just an embarrassment.  It is also greatly harming our domestic tourism industry, preventing visitors from coming and spending money here.

Denmark claims to have now beaten the virus and has removed all virus related restrictions on people’s activities.  As you can see in the chart above, they do have a relatively high vaccination rate (74%), but removing all restrictions has not proved to be a good idea anywhere else in the world, so we are less than sanguine that Denmark’s “victory” will prove any more sustainable or real as that of the UK or that of ourselves.  We wish them good luck, though, and they’ll probably need it.

England had been preparing to implement a requirement for a vaccine passport for people wishing to go to restaurants, bars, and mass events.  They’ve now decided they don’t need to do this.

Why is this no longer needed?  Is Covid no longer an infectious disease? Has the science changed? Or – more realistically – just the politics?

Don’t you just hate to see decisions being made for political rather than epidemiological reasons.  Britain’s prevarications and wrong steps in the past is why the country is number six on the major country Covid case rate list, above.