An article came out this week with the headline “A daily pill to treat Covid could be just months away, scientists say“.  The article was very “formulistic” in terms of written to a very standard style of journalism, right from its headline.  I read through its 1350 words, looking for, but not finding, any mention of the daily pill that you and I both already know about – ivermectin.

As far as the writer seemed to be aware, ivermectin does not even exist.  At least there weren’t any terrible lies about it, but why the total silence?

Ivermectin is already featured in this series of protocols, both as a preventative measure (twice a week doses) and as an early treatment (daily).  The article refers to the government signing up for $1.2 billion worth of a new experimental treatment drug that would cost $700 per course of treatment.  That compares with very close to $7 per course of treatment for ivermectin.  With 43.8 million Covid cases in the US, so far, that would have been the difference between $30.7 billion and $307 million in treatment costs.

As I often lament, the US needs to start realizing it is no longer a wealthy country, and abandon the unstated mantra that “the best treatment is the most expensive one”.  We can’t afford a needless $30 billion in extra treatment costs, and we certainly can’t afford the hospitalization costs we’re clocking up at present as a result of no treatment at all being dispensed.

The article also shows the government investing $3.2 billion in covering the R&D costs for developing still more new anti-viral treatments.  As we know from past cases where the government covers the cost of a new drug, that doesn’t mean that we, the people, then get the drug given to us for free.  The pharmaceutical company still charges over-the-top amounts, ignoring that we covered their development costs and so, by rights, surely should own the drug rights.

While the government is tossing $3.2 billion into developing new drugs, couldn’t it also spend a few hundreds of dollars in getting ivermectin authorized as a Covid treatment?

Talking about money, I think the politest thing to say regarding this article about the vaccine companies standing to get billions more dollars (in revenue, not so sure about profits) from selling extra booster doses of their vaccines, is that it sure makes it tough for the drug companies to take a balanced and fair view about the need for booster shots.  We should never forget that big pharma is in the job of selling their products.  Their advice as to if we should use their drugs or not is no more impartial than taking advice from the local bar owner if you should have just one more drink before leaving, or asking the casino boss if it would be a good idea to bet on one more spin of the wheel.

Meanwhile, the leaders at Pfizer, Moderna and AstraZeneca are suggesting the end of the pandemic is at hand.  Well, it will be, just as soon as we buy a few more billion doses of their vaccines and boosters, perhaps….

I’ve now seen a copy of a document I’ve already seen written about.  It shows a 2018 research grant request, asking for a $14.2 million initial funding grant from DARPA for the “EcoHealth Alliance” (a more sympathetic name than “Wild and Crazy China-loving scientists”) so it can work with bat viruses in China.

Does this document explain how it came to be that scientists in Wuhan created the Covid-19 virus?  And was it our money that paid for it?  How ironic that would be….

One more point about the proposal.  It talks in positive terms of “defusing the threat of bat-borne viruses”.  Two points.  First, mankind has lived for thousands/millions of years without a bat-borne virus attacking it in a pandemic form.  Just how severe is that threat?  Are there no more important things in the world than this?  Isn’t it better to leave such things well alone?

Which brings me to the second point.  Is the best way to “defuse the threat” to make the viruses more deadly???

There were no changes in ranking for the minor country list.

There was just a small swap of places in the major country list (Belgium and Spain) with the change not indicating so much one country growing faster than the other as it indicates Spain’s numbers slowing down more quickly than Belgium’s.

In the unlikely event that nothing greatly changes, the US seems set to reach the number one position in about twelve weeks.

There was no change in the death rate list.

The “most active last week” list saw most countries easing in their new case numbers for the last week, with a notable exception being the UK, with a 16% rise.

Mexico and Canada saw a swap in fortunes this week.  It was Mexico’s turn to rise, by 11%, and Canada’s turn to fall, by a sizeable 32%.  The world as a whole dropped by a pleasing 13%.

The FDA’s vaccine advisory panel of experts voted 16-2 to limit the use of vaccine booster shots to the over 65s.  The CDC director then overruled their finding, broadening their use for “frontline workers” too – a broad swathe of the population that extends even to teachers, and if based on daily person-contacts, should include many/most office and shop workers too.

You have to wonder what is the point of constituting a doubtless very costly panel of 18 experts if – after about as close to a unanimous vote as you’d ever expect – their vote against a concept is overruled by a political appointee executive.

Is this “following the science”?  You know, the thing that politicians boast about doing when it suits them, but instantly ignore the minute it is no longer so convenient.

Covid will become weak like a cold, and future variants won’t become vaccine resistant.  That’s the fantasy land projection of a woman who was involved in the controversial AstraZeneca vaccine (the one still not approved in the US…..).  It would seem to totally contradict our present experience of new variants becoming more infectious and more vaccine resistant, and further contradicts the underlying evolutionary pressures on the virus causing it to develop those attributes.

Here’s a massively increased list of pharmacies, in the US and elsewhere, that will supply ivermectin – usually requiring a prescription, but not always.

The first page of that list also provides factual responses to the lies pharmacists tell about why they can’t/won’t fill ivermectin prescriptions.

What a strange old world it is at present.  Doctors fighting against other doctors.  Pharmacists deciding they are the best judges of medicines.  Arguments between disagreeing groups of scientists, notable for the lies within them rather than the facts.  And on top of it all, “science-following” politicians doing the exact opposite of what both science and common sense would suggest. 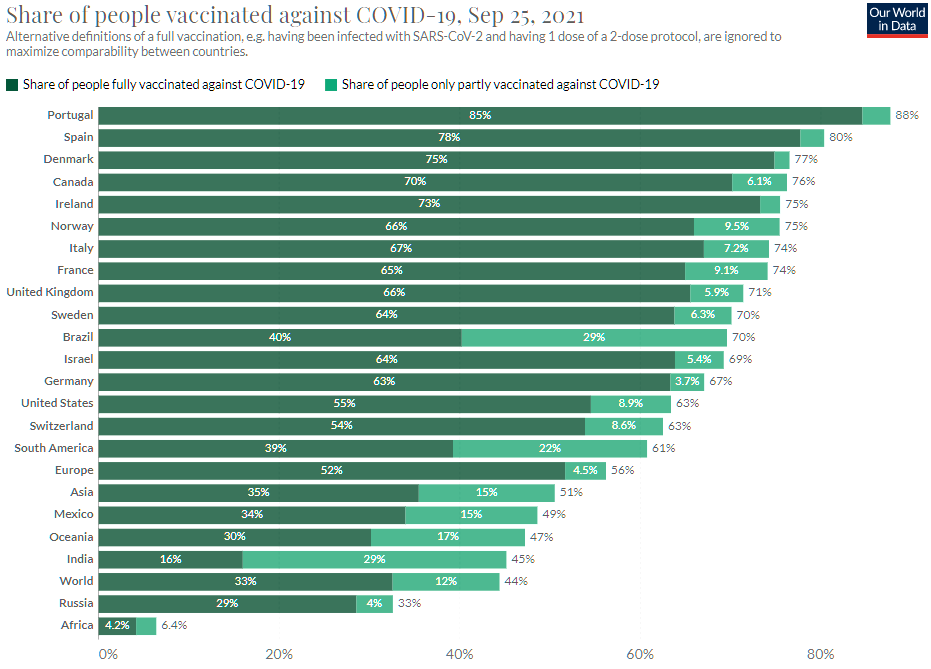 Some countries are doing very well with their vaccination campaigns.  And look at Brazil and India – although both countries have low counts of fully vaccinated people, look at the huge size of their “in the middle of getting vaccinated) groups.  That hints at a massive rate of ongoing vaccinating.

Remember Sweden?  A year ago, we (and everyone else) was writing about how it had decided not to impose restrictions on its citizens as a response to the Covid threat.  After some months, it was becoming apparent that Sweden was suffering higher rates of Covid cases than its neighbors such as Norway, Denmark and Finland.  Sweden made the valid comment that the key issue wasn’t how well they were rating in the middle of the outbreak, but where they placed at the end of the outbreak.

We’re now, if not at the end of the outbreak, certainly a lot further along than a year ago, and it is interesting to see how Sweden’s approach is comparing now with its neighbors.  This article’s headline gives us a hint – “Sweden won the argument on Covid”. 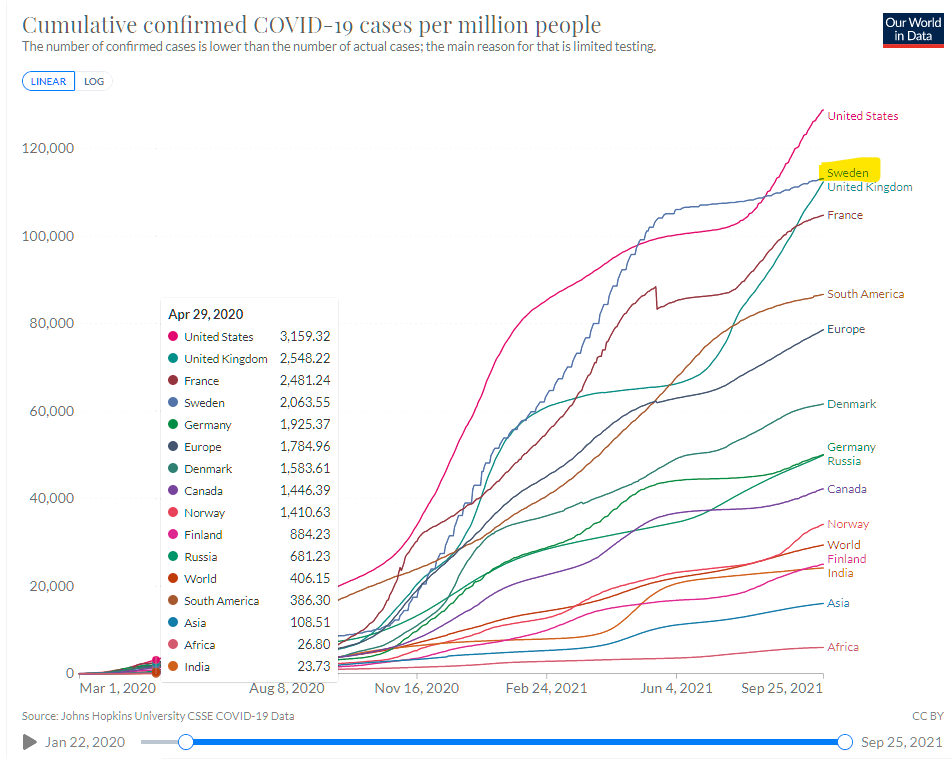 Is that really “winning”?

This article makes the interesting point that we are holding foreign visitors, flying in to the US from a foreign country (with a much lower/safer level of virus activity) to a much higher standard than we are holding ourselves.  Why?