The genteel, polite, and scientific/medical advocacy for hydroxychloroquine was caught off-guard by the vicious push-back against it, and never really recovered, allowing the popular narrative to become that HCQ is dangerous/deadly and ineffective.  That is in equal part unfortunate and undeserved.  Perhaps the reason there wasn’t a stronger effort to rebut the lies told about HCQ is the recognition of ivermectin as being even more beneficial than HCQ, something that quickly became apparent early in the HCQ debacle. 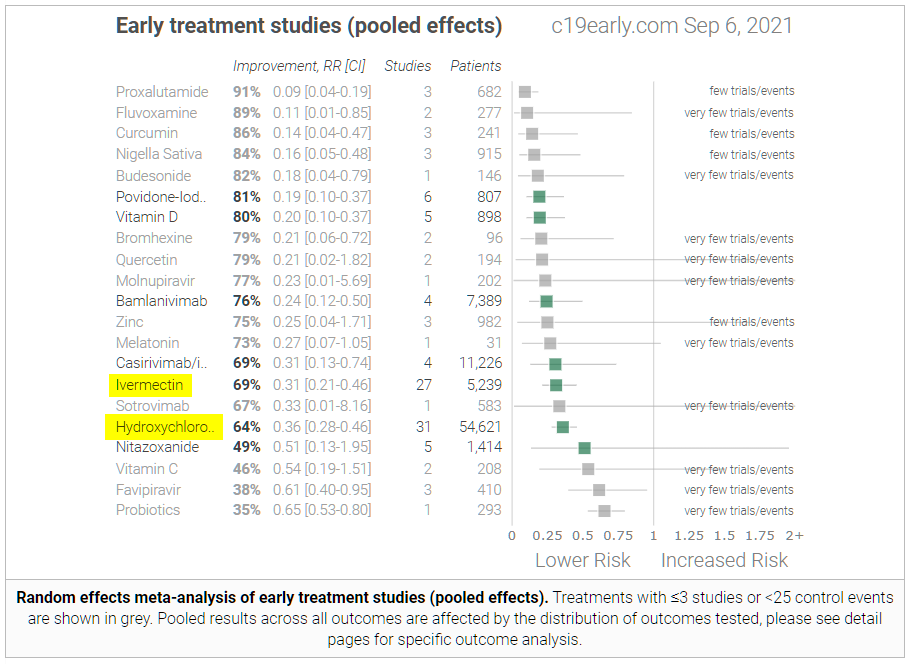 As you can see, the table (source) shows a slightly better rate for IVM, and with a broader base of studies and subjects than for HCQ.  IVM’s rate also extends more validly to later and more serious stage infections, too (see the source for more data).  There are also plenty of other treatments, but most of them do not have sufficient significance to be cited, and so are shown in grey rather than black.

The good news, such as it is, about what seems to now be an orchestrated series of outright lies being promulgated to attack ivermectin is that the same people who were first caught off-guard by the ferocity of the dishonest disinformation about HCQ are now more focused on fighting back when the same techniques are being used against ivermectin.

As perhaps the most outrageous recent example, here’s an article in Rolling Stone Magazine that opens with claims from a doctor that emergency rooms in Oklahoma were so overflowing with people who were seriously ill after taking ivermectin, that gunshot victims were being turned away, or forced to wait their turn in line.

That is an extreme claim isn’t it, even if we ignore that the only people unwell from ivermectin use are those who took massive overdoses of it – billions of people, all around the world, have safely taken ivermectin, at the correct doses, for decades, and the drug can safely be taken at two, three, four, maybe more times the recommended dose.  It is also worth remembering that people only took overdoses of ivermectin because doctors refused to tell them the correct dose and prescribe them normal pills.

In addition, there’s also the irony that if doctors had been prescribing ivermectin to people who requested it, not only would there not be overdoses, but the hospitals would see massive reductions in Covid patient admissions, due to the beneficial effects of the ivermectin.

Oh – there’s one other thing about that headline-stopping claim, too.  It is totally false.  It is a complete fabrication.  It turns out the doctor doesn’t work for the hospital system he was referring to, he is only a contractor, and as such, had not been working at the hospital in over two months.  It further turns out the hospital has not treated a single person for an ivermectin overdose, and neither has it turned away anyone seeking emergency care of any type.

But Rolling Stone simply added an “update”, while leaving the headline in place, untouched.  Their headline appears on the “Trending” section of every page – “Gunshot Victims Left Waiting as Horse Dewormer Overdoses Overwhelm Oklahoma Hospitals, Doctor Says” – only if you click to the article does the “update” appear.

What caused a doctor to 100% lie and create a totally fictitious claim?  Is he delusional?  Was he paid to do so?  What consequences is he now suffering in the form of discipline from the AMA and the accreditation boards?  Why did Rolling Stone not fact-check the claim before printing it?

There have been examples, around the world, of doctors being censured for promoting ivermectin use.  But does the opposite also equally apply – doctors getting into trouble for outright lies and alarmist nonsense about the drug?

The key lesson in all of this?  Those people seeking to destroy ivermectin’s reputation are being forced to invent increasingly more and more outrageous lies, because the truth is becoming increasingly more and more impossible to refute.  For example, just a couple of days ago in India, the Indian Council of Medical Research, the most respected medical research body in the country, added ivermectin as an essential medicine for use in Covid treatment.

Where are the headlines demanding to know why India, with a Covid case rate nearly six times lower than the US, supports ivermectin but the US does not?  Why do we instead get headlines all about “horse dewormer” and lies?

I’d mentioned the puzzle of the two senior officials in the FDA’s vaccine approving department simultaneously resigning.  It now turns out they resigned in protest at Biden’s plan and promotion of a third booster vaccine shot, because Biden’s decision was made without any scientific underpinning whatsoever.  Indeed, as this article points out, both the FDA and CDC are united in asking the White House to wait until more research has been done to support the concept of a third vaccination, and to better understand when that third shot should be given.

In the death rate list, Mexico and the US both rose one place, with Poland dropping two places.  The US is within a few deaths of exceeding total deaths of 2% of the entire country (666,219 deaths as of the end of today’s count).

In the case rates for the last week, Israel stays near the very top – see our comments about Israel’s booster vaccination program, below.  The UK and US keep their places, and other countries come and go.

Canada’s case rate continues to climb, up another 21% in the last week, and Mexico’s dropped by 17%.  The world as a whole had a sizeable 10% drop in cases compared to the previous week’s count. 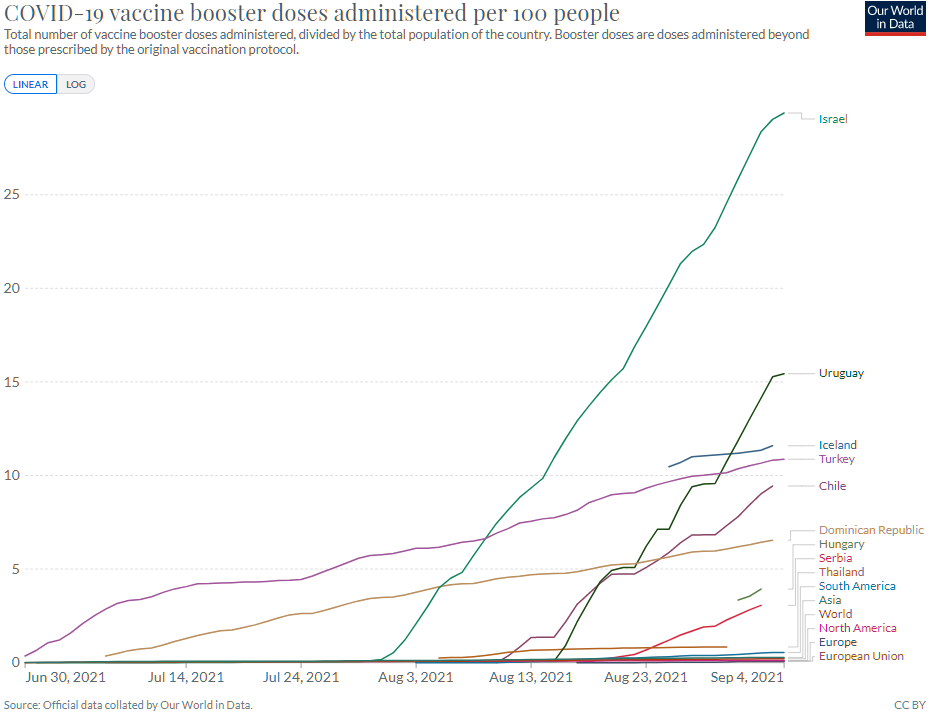 While we in the US are still trying to decide the best thing to do with booster shots, some countries have already started giving them out.

As you can see, Israel has already given booster doses to 30% of its population – but still it struggles with surging rates of new cases (see the tables above).  That’s not exactly a great advertisement for the value of booster shots, is it.  The reason for the strange selections of countries is because these are the only countries the website had data for. 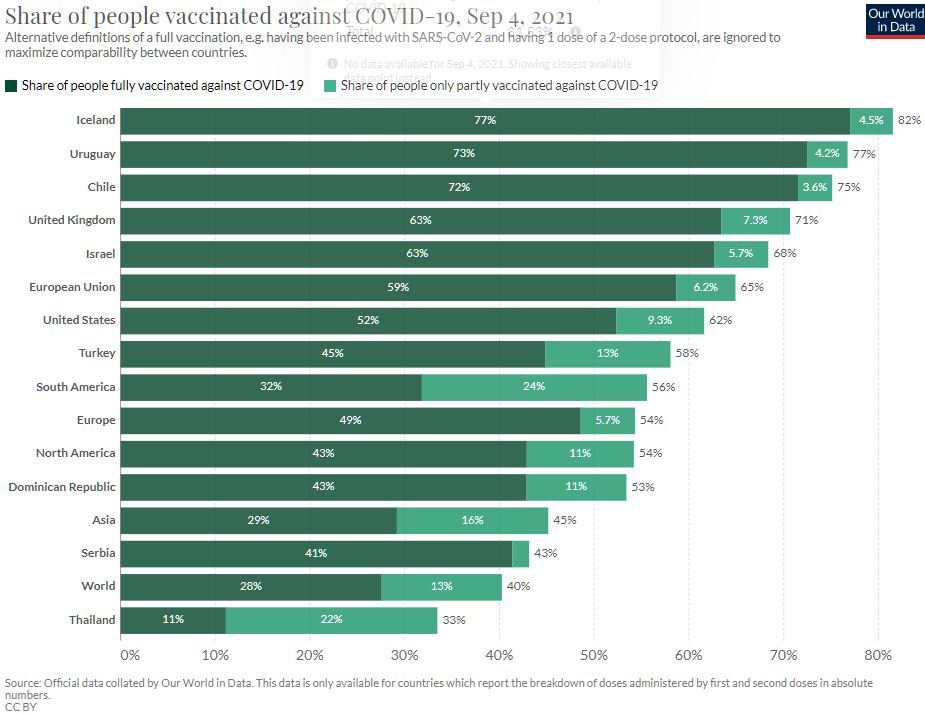 Here’s a matching chart showing how many people in the same countries are already fully dosed, or on their way to being fully dosed.  I added the US and UK to the chart.

One of the criticisms about the US response to the virus is that it has been very uninterested in testing infected people to see which variant they have been infected with.  And even if they do test, astonishingly, you’re not legally allowed to know which variant you have been infected with, unless a bunch of extra bureaucratic steps are taken which involve both extra time and extra money.  Needless to say, few healthcare providers do this.

Keeping such information secret from the patient seems a totally bizarre action.

I’d wondered how fake vaccine certificates were being caught. Turns out it isn’t all that hard – a woman was arrested for using a  fake ‘Maderna’ vaccine card during a visit to Hawaii.  She was unable to make bail and so is in jail pending trial.