I’ll be discussing more about the EU’s Monday decision about US travel in the Friday morning roundup.  For now I’ll  to observe that while the EU largely continues to allow us to visit them, the US refuses to allow Europeans, even vaccinated ones who also take Covid tests before and after traveling to confirm their Covid-free status, to come here.  Making this refusal all the more ridiculous (if that is actually possible), the US continues to welcome unvaccinated people from many other countries, such as Russia, Indonesia and Peru, and including countries with much higher virus activity rates, into the country.

But, dear Europeans, please don’t think we hate you more than we hate most of the rest of the world.  Although we allow unvaccinated Mexicans into our country, we refuse to allow Canadians in, vaccinated or not, even though Mexico’s rate of current virus infections is almost 40% higher than Canada’s (and both are five or more times lower than the US rate), and even though Canada allows us to go visit them.

Now you try telling me the same lunatics who have created these policies and refuse to review/revise/remove them can be trusted to set any other type of public health policy at all, whether it be about vaccinating or masking or social distancing or anything else.  The people who proudly pretend to be “following the science” clearly lack the comprehension to understand what science is.

One last point about this offensively illogical policy.  Why are we being pressured to be vaccinated if the US deems the risk of allowing people to visit us, even if they have been both been vaccinated and tested negative, to be unacceptably high?  Surely a large part of the purpose of being vaccinated is to allow people to then travel?

Where is the beloved (especially by himself) Dr Fauci on this?  While he is great at uttering platitudes on non-contentious matters, what is his opinion on allowing Canadians and Europeans to visit?  Why is he silent on this?

As for the FDA, it shows its contempt for us, the people it is supposed to be protecting, by comparing ivermectin patients with horses and cows.  Fortunately, we still have judges who bravely wade into what should be a simple scientific medical matter and overrule hospitals (again this week) that refuse to allow their critically ill Covid patients access to this life-saving medicine.

As for the CDC, it is still struggling with very basic statistical analysis – rather alarming when you consider the pivotal role that statistics has in understanding diseases and their spread.  Here’s a fascinating and generally convincing analysis that throws shade on CDC official commentaries, while using the same source data.

As I’ve asked before, what does it mean to “follow the science” when the supposedly leading scientists follow it in opposite directions (the CDC) or simply ignore it entirely (the FDA)?

Which brings me to the other thing I’ve said before, underscored by the almost 1,500 people dying each day in the US and the over 40 million people who have been officially infected by the virus here.  Our problem is not the virus, at all.

Our problem is not the virus.  It is the people who are in charge of managing how we respond to it.

There were no changes of ranking in the minor country table this week, although the Seychelles saw its case counter flip over to now register 20% of its people have officially been infected by the virus.

There were (of course) changes in the most active countries in the last week.  The US moved up two places, and Britain dropped one.  Israel – proclaimed as the “vaccine success story” is now suffering the highest rate of new cases of any country in the world, apart from the tiny French territory of Guadeloupe in the Caribbean.

Mexico enjoyed a 17% drop, while Canada’s mysterious growth continued, up another 23%.  The world as a whole enjoyed a 3% drop.

More good news.  This paper reports some encouraging outcomes of over-the-counter treatments being used to fight Covid.  In case that phrase doesn’t stand out sufficiently, “over the counter” is the formal way of saying “no prescription required”.  I’d particularly observe the positive comments expressed about quercetin.

Not an over-the-counter treatment, and definitely not available at your local Costco or Walmart, but also showing possibly positive results, is Brazilian viper venom.  If only it were easier to collect…..

We’re told that people who experience a “breakthrough case” (a polite way of describing when the vaccine doesn’t work) of Covid suffer only mild cases.  But everything is relative, and this article points out how “mild” isn’t always the best term to use.

This article reveals yet another downside of a Covid infection – even a “mild” one.  Possible kidney damage.

You may have noticed (!) that I was somewhat critical of the FDA, above.  Perhaps that is not entirely fair.  They’ve been without a head since the ritual hara-kiri that accompanies a change of administration.  I guess Mr Biden has been too busy doing other things to consider a new FDA head.  The FDA are also losing two senior members of their vaccine review office.  Both the director and deputy director at the FDA’s Center for Biologics Evaluation and Research are resigning, for unclear reasons.

And a new virus variant, termed the mu variant.  What will we do when we run out of Greek letters?  WHO is “closely studying” the variant.

Pfizer announced this week the phase 2/3 trial of a new anti-Covid drug that you simply take in pill form.  By coincidence it is described as working against the virus in essentially the same way that ivermectin (and other existing drugs) does.  But with Pfizer’s brand pushing it, what’s the chance it will be approved long before the FDA stops referring to ivermectin as horse deworming medicine.

So which is it?  For a tie-breaker, here’s a third article about the vaccine’s effectiveness.

As observed above, how can we hope to “follow the science” when the science is presented to us in opposing forms? 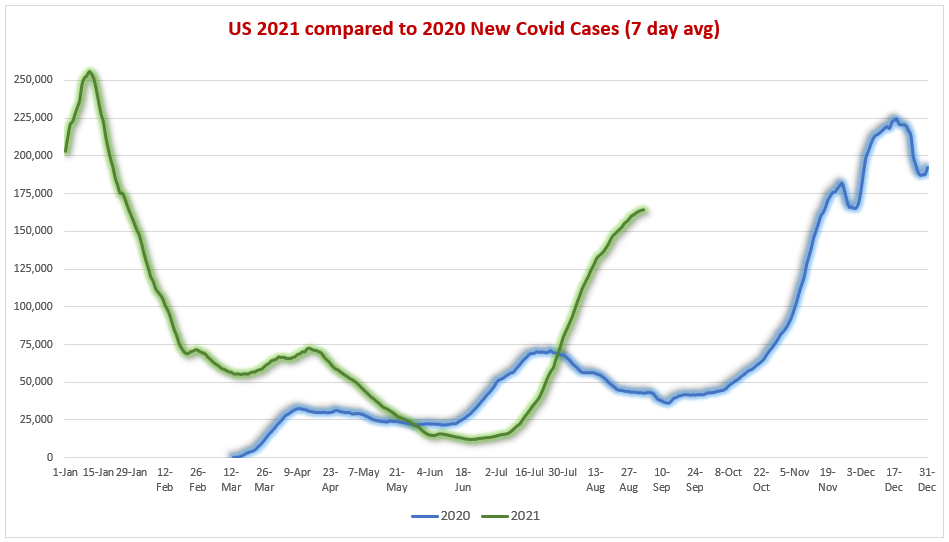 This is an interesting chart comparing the running seven day average of new virus cases in the US this year (green) against last year (blue).  Currently cases are 3.8 times higher than they were the same time last year.

But, slightly obscured by this squashed up timeline, it seems the US may be about to start enjoying a drop in virus numbers again.  The rise in new cases each day has been steadily reducing and now is very close to zero.  However, I have to wonder if the “back to school” change in social habits might not give the virus a new chance to reach us – I now find myself looking slightly askance at my own high school daughter when she returns back from school each day.  It will be interesting to see how things unfold later in September and on into October.

I’m very data-driven (in case you can’t tell!), but while I do my best to wring as much as I can from the data available, sometimes I pause and despair, because – much like the computer aphorism, “Garbage In, Garbage Out”, if the data is unreliable, the interpretation is unreliable too.

So when I read stories like this, about how Florida quietly changed the way it counts/reports Covid deaths, it is all very depressing.  Not only does it throw the data validity into still more ambiguity, but it begs the question – when our public health authorities choose to obfuscate and distort the truth, how can we know when to trust them and when not to?

I was so delighted to be able to go inside a McDonald’s store a couple of months ago.  I didn’t actually eat there, but, as you might know, the time it takes to order and get one’s food handed to one is massively shorter when ordering at the counter than when waiting interminably in a drive-through lane.

I noticed with surprise a couple of weekends ago that a McDonald’s was open on Thursday, but by Saturday, had closed its inside ordering/dining again, in response to rising Covid numbers in WA.  This article points out that McDonald’s and other chains are now deciding, more or less store by store, whether to be open or closed.  Makes it difficult to know where to stop to get food on a road trip, doesn’t it.

Why does the CDC even bother wasting its time and our time with such ineffectual statements?  It is like whispering to someone on the other side of the road, in a storm.

The most surprising thing, to me, about the ongoing shortages in all sorts of different things is how relatively small disruptions in staffing can create disproportionately large disruptions in supplies.  This article is headlined The World Is Still Short of Everything. Get Used to It.  I guess it is like a freeway.  At 99% of capacity, everything flows smoothly.  At 101% of capacity, everything stops.  The people who created “just in time” systems have a lot to answer for.

In case you’re hoping things will get sorted out in time for Christmas, abandon that hope.  This article points out that now is the time stores need to start getting Christmas stock, and it isn’t coming, for any of many different reasons, with disruptions all along the supply chain.