Can we agree that, and notwithstanding the benefits it conveys, the vaccine has failed to live up to our hopes and dreams?  As I type this, heavily vaccinated Washington State, where I live, is back in some vague degree of lockdown, masks are required indoors for everyone, and in “large” outdoor events too, for everyone, vaccinated or not.

But weren’t the vaccines supposed to stop us getting infected, or passing infections on to others?  Well, the revised truth is that no, they are only to prevent us from being hospitalized and/or dying, a year ago we were hoping the Covid vaccines would be like almost all other vaccines – they would stop us from getting infected, and would stop us from passing infections on to others.  Wrong, and wrong.   Both expectations failed to be met.

However, at least we can agree that the vaccines have succeeded in reducing hospitalizations and deaths, right?  Well, even that doesn’t seem so certain now.  Assorted states, most recently Alaska, are featuring in scare headlines about running out of hospital resources and doctors having to make “life and death” decisions about who they treat and who they don’t/can’t treat.

Ah yes, the vaccine apologists will say.  It is only the unvaccinated who are in hospital.  But not only is that wrong, but it ignores the promises of “herd immunity for all” that the vaccines were also promised to give us.

There’s another excuse, too.  The vaccines are working well against the original virus, but no-one expected the new Delta variant which is a game changer.  That too is wrong – the Delta variant was out there and rising before the first jabs started going into people’s arms in December.  And now, ten months later, we’re still using the same vaccines as we were then, notwithstanding the pharmaceutical companies boasting that with their new mRNA vaccines, they can create new designer vaccines in days to respond to new virus threats.  Indeed, the official chronology of the present mRNA vaccines tells us they were created in just a few days, and then all the months that followed were patiently going through the rigmarole of trials and procedures.

So why not new vaccines for the new virus strains?  Why are we still using vaccines that are now 18 months out of date?

The vaccine apologists also will tell us that, even if the vaccines aren’t quite as good as we’re hoping, at least they’ve not killed anyone.

Except even that is far from clear – remember this chart, showing vaccine related deaths reported through the VAERS database?

One last claim – the longevity of vaccine protection, has been slowly fading, in a wonderfully synchronized manner alongside the gaining of permission for the pharmaceutical companies to boost their sales by 50% by selling us third doses.  This article claims that in seven months, the vaccine generated antibodies have almost completely vanished for many people.

I’m not saying these are reasons to not be vaccinated.  Even seven months of limited protection has some value, and for older people, the risk of virus death remains higher than the risk of vaccine death.  But I am saying we need to be honest with ourselves.  The vaccines the FDA have approved are massive disappointments that don’t come within a country mile of meeting the hopes and expectations we were encouraged to have for vaccines a year ago, and has not allowed our society to return to normal.

But, that is all water under the bridge.  Looking forward, why is our response to the colossal failure of the Pfizer and Moderna vaccines a doubling down and a determination to more rigorously force people of all ages, even those totally not at risk, to get vaccinated, and with the same identical vaccines that have failed the rest of us who have already been vaccinated?

Meanwhile, we’ve new vaccines that seem curiously stalled in their trialing due to lack of resources, vaccines that on the face of it seem to be safer and more beneficial.  The current count has 22 different vaccines approved, 49 vaccines in the final (third) phase of trialing, 57 more in the second phase, and another 37 in phase 1.  But in the US, there are only three vaccines approved, and one of those three (the least radical, the Johnson & Johnson vaccine) has been deprecated and is sometimes hard to find.

I’ll certainly agree that some of the other 19 vaccines are of no relevance or interest – they are of very dubious provenance.  Others are only available in limited numbers, but that’s a problem that could quickly be changed if the government were to do the same thing it did for its favored vaccines and pharmaceutical partners and toss billions of dollars to get the vaccines into fast mass production.  And the same thing with those 49 vaccines in the third phase of trialing – couldn’t we fast-track a few of those?

Why are we pretending that our only remaining problem is the few people in the US who haven’t yet been vaccinated?  That is not our problem.  Our problem is that the vaccines never worked well, are being beaten by the Delta variant, and stop working at all way too soon.

Something that the official statistic about how many people have been vaccinated distorts is that in the key age groups (say, 50+), we have vaccination levels closer to or even over 80%.  The national average of 55% is lowered due to people in younger age groups not yet having had a chance to be vaccinated.

This is shown in this table.  The unvaccinated “problem” is with age groups that have only recently been approved to be vaccinated, and only by one of the three vaccines, and, to be blunt, in age ranges where the vaccine benefits are much less clear when measured against the vaccine risks.

Why is it the Covid vaccine is so much more dangerous than – without exception – every other vaccine being given to Americans – look up again at the VAERS data.  And why are we being forced to pretend this is not so?

Most of all, why aren’t we eagerly seeking out safer vaccines, rather than increasing our risk exposures an unknown extra amount by currently allowing (and, for sure, soon enough mandating) third doses, and perhaps six or seven months after, a fourth dose, and maybe an ongoing schedule of twice-yearly doses into the future?

Georgia moved up two places in the minor country list.  In the major country list, the UK rose strongly, up two places.  It seems likely to displace Netherlands within the next week, but it will be some time before it threatens the US for second place.

No changes in the death rate list, although the US seems certain to rise one place during the next week, and perhaps another place in the week that follows.

The final table, of Covid new case activity last week, had generally moderating numbers.  The UK fell one place, and the US dropped off the list entirely.

A new book claims that Covid was a bio-weapon project rather than a research project gone wrong.  That would further explain the desperate cover-up the Chinese embarked upon.

Would it also explain how Covid seems to seek out westerners, while largely leaving Africa and Asia untouched?  Certainly, there can be no denying that whereas some western countries have been suffering case rates in excess of 10%, most of Asia has rates less than 2.5%, most of Africa has rates less than 0.5%, and China reports a rate of 0.0067%.  China’s official count of 96,258 cases in total is fewer than we have every day.

Talking about China’s desperate cover-up, the name Daszak is omnipresent whenever it comes to defending the indefensible acts of China. Why is he so strident at refusing to see reality?  This article suggests he might finally be getting to the point of having his career at risk.  About time.

Merck’s well-oiled public relations machine is rushing into action, resulting in headlines appearing everywhere about their “miraculous new drug” that could treat early stage Covid and reduce hospitalizations by about 50%.  A course of treatment would cost “only” $700 and the US government has already rushed to buy $1.2 billion worth of doses, before a single authorization or approved independent research study supporting Merck’s claims.

Meanwhile, ivermectin, now adopted by over 20 countries, and with uniformly remarkable results, would cost less than 1/100th the cost of Merck’s new drug, has had over 100 independent studies, many refereed, and rather than offering a 50% reduction in hospitalization, promises a 70% reduction in death if used in early treatment.

Why are the critics of ivermectin, a known safe drug and with over 100 studies supporting its use against Covid, all claiming there is insufficient evidence to “risk” using it, now so silent about an entirely new drug, with only one study (by the pharmaceutical company itself), with an unproven safety record, and a 100-times higher cost?

We could possibly understand their hate on ivermectin if it were uniformly applied to other drugs, too.  But it isn’t. 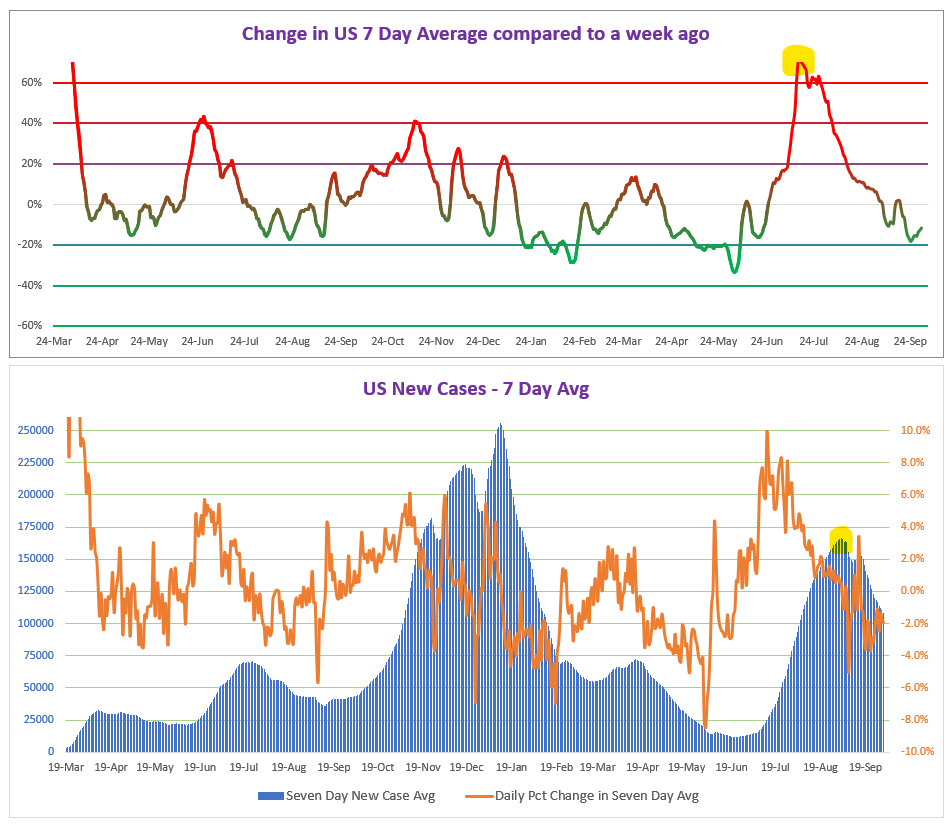 As you can see, and as I’ve been reporting most days when the data is available, the trend to first a reducing rise in new Covid cases, and leading on to steadily falling Covid cases, started around 25 July.  But it is only now, with the seven-day new case average now down 37% from the most recent peak, that Fauci says “We certainly are turning the corner on this particular surge”.

Where would we be without this guy’s brilliant insights. 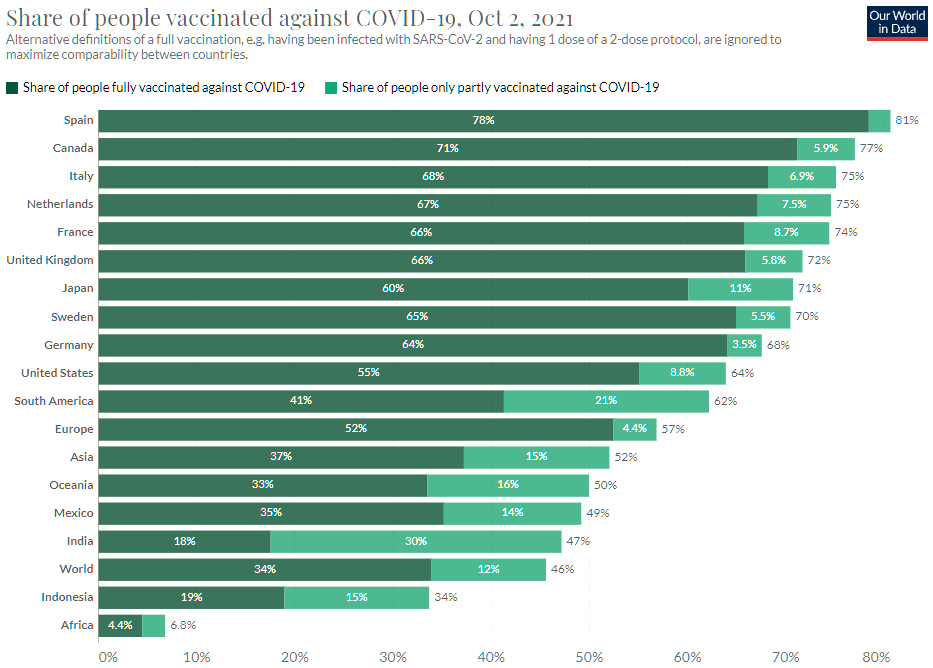 The astonishing rate of vaccinating going on in India is shown in this charge, with a huge percent of people on the way to full vaccination.  Similar growth can be seen in South America and Indonesia too, and indeed, the world as a whole.

Some people make Africa’s low vaccination rate out to be a global tragedy.  Not so.  Africa is the least-affected continent by a huge margin, it is right and appropriate that the most impacted countries should be vaccinated first, because they are most at risk.

Here’s a helpful but far from complete list of options and alternatives on how to have some type of electronic vaccination record on your phone.  Not considered though is whether any such record would be broadly accepted or not by the places demanding vaccine proof.

Here’s an amusing thought.  Next year, it is entirely likely that people will have to show proof of vaccination to enter a polling booth, but will not have to show proof of identity to vote.  So we have someone who goes to vote (proof of vaccination/ID) then goes to enjoy a drink at a bar (proof of age/ID).  But while voting, no ID proof is required.

How is it we can say, without bursting into side-splitting laughter, that many people in this country don’t have and can’t get some sort of ID and so it would be unfair to deny them the right of voting, but at the same time, require proof of vaccination (and not just for voting), proof of age for drinking, proof of ID for driving, and so on.  Does that make sense to you?

Here’s a curious use of Covid funding – building prisons!  Perhaps Alabama’s decision to use Covid funds to build prisons partly explains why AL is 8th worst US state as measured by Covid cases/million pop.