I’ve been speculating about the improbability of China’s low Covid numbers.  While Hong Kong has not yet been completely assimilated into the “Middle Kingdom” (as China refers to itself) it is becoming ever more tightly a part of China, so it is interesting to note what is happening there.  To start with, it is helpful to rank Hong Kong’s Covid case rate (1,619/million), while 85 times lower than the US (136,000/million) is also 24 times higher than China (67/million).

Hong Kong is boasting to be Covid free, and life to be back to normal.  But, what is “normal”?  This article rather long-windedly takes its time to explain, but once it get there, it is clear the dystopian view of “normal” that reigns in Hong Kong is far removed from what we’d understand it to be – people being summarily seized and hauled off to 21 day quarantines if they are suspected of being at risk of Covid infection being just one part of Hong Kong’s “normalcy”.

Is this also the secret of China’s normalcy?  A draconian series of crackdowns and interventions?  Increasingly, it is hard for us to know exactly what is happening in China, just as it is increasingly difficult for Chinese people themselves to know what is happening around them.  But there are perhaps three missing zeroes on China’s official Covid rate that need to be explained and understood.

So, from the negative to the positive – what remains?  The inexplicably confusing.  In a manner that rather reminds me of the shifting set of lies surrounding masks – we don’t need them, we do, we need two, then we don’t need them after vaccination, and now, apparently we do again;  we’re being told not to worry if our vaccine based immunity is waning, because some of it still remains.

But why would we not worry?  Or, if we don’t need to worry, why do we need a third vaccination?  These two stories do not fit with each other.

We’ve been told the sky will fall on our heads if we’re not vaccinated, and now we’re being told the vaccines are fading fast, but not to worry?  My interpretation of this, and the platitudes in this article that expresses that strange thought, is that as soon as there’s enough vaccine out there again to give third shots to everyone, all of a sudden, we’ll be told to start worrying and rush in to clinics with our sleeves rolled up again.

And as for that third shot, it doesn’t seem to be quite the miracle that has been promised.  This article says it is 86% effective in the over 60s, but doesn’t tell us what it is measuring/defining the happy word “effective” as meaning.  Preventing death?  Hospitalization?  Mild illness?  Infection?  There are so many different measures.  And the puzzling thing, weren’t we told the first two shots would be something like 95% effective (against severe illness/death)?

Sure, maybe the third shot gives a renewed spurt of protection, but is there an underlying unstated truth here?  That the renewed immunity doesn’t reach the same levels as the first short-lived period of immunity?

So much we don’t know; so much we’re not being told….

The UK is now in third place on the major country list.  It is a long run from there to reach the US at second place, and another long run for either US or UK to reach the Czech Republic.

The US moved up one place in the death rate table and seems certain to move up another place by Thursday.

I’m not sure which part of the molnupiravir situation is the more offensive – the lack of trialing and testing, or the extraordinary markup and profit Merck stands to make on a drug that was partly funded by us in the first place.

Here’s an interesting claim.  It is unverified, and, by its nature, unverifiable.  But its source – Dr Pierre Kory, one of the stalwart advocates for off-the-shelf early treatment of Covid infections – is highly credible and due to his central role, perhaps in a position to have some knowledge.  He is claiming that between 100 – 200 Members of Congress and their families and/or staffers have been treated with ivermectin and the rest of the Frontline Covid Critical Care Alliance treatment protocols.  Oh, and none of them have needed hospitalization.

His point is that the same people who are sitting, mute, in Congress and allowing the ivermectin lies to be promulgated with the force of law by the FDA and other groups are quietly using it, successfully, to treat themselves.

And, here’s a page to bookmark or even print out and keep for reference – it is the current version of the FLCCC treatment protocols.  This is the 17th version of the protocol, dated 24 September 2021; self-evidently, as new information comes out from time to time, the FLCCC updates their protocol to follow the best knowledge and state-of-the-art practices.

Make sure you have all these medicines on hand, in case you should find yourself or a loved one needing them.  Don’t end up as a newspaper headline – another dying patient in hospital while the doctors refuse to treat you. 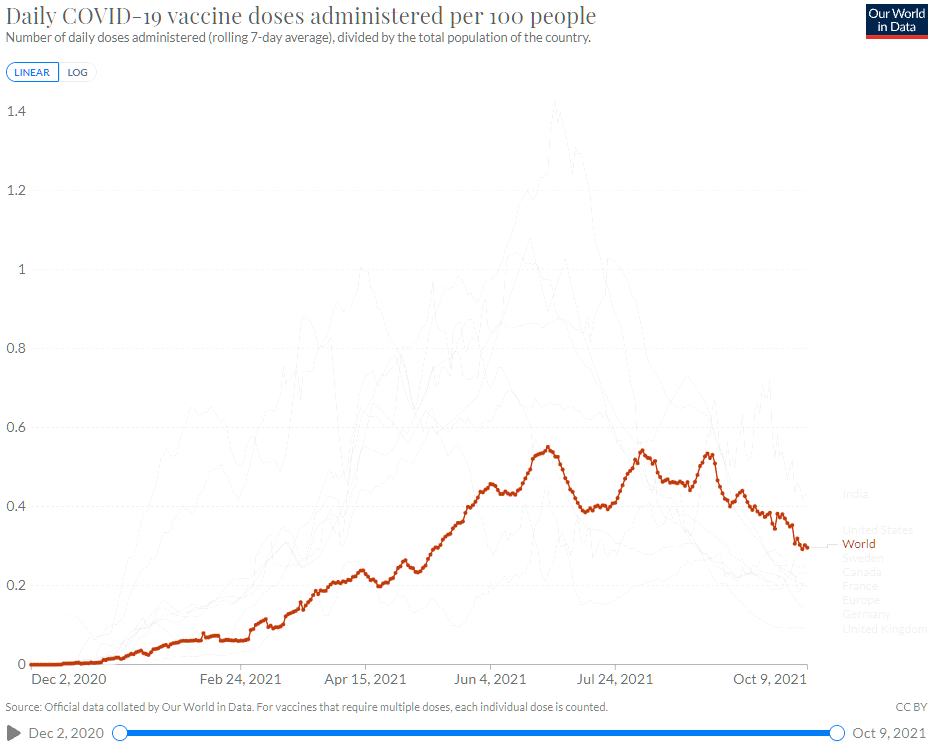 On Thursday I expressed surprise at some inconsistencies in the tracking data of vaccination rates – the count of people vaccinated is rising at a rate inconsistent with (ie slower than) that implied by the same data.

Here’s another puzzle.  Probably your guessed-at understanding is the same as mine.  To start with, there was a mad scramble by countries to get vaccine doses.  But wouldn’t you guess, as pharmaceutical companies the world over have brought more manufacturing on-stream, that world-wide, we’d see daily vaccination rates rising steadily?

Now look at the chart above.  For the entire world, we reached a max vax rate on 27 June, and currently, the rate is half what it was back then.  Why are global vaccination rates dropping?  Staying steady, I could understand.  Rising, I could surely understand.  But dropping? 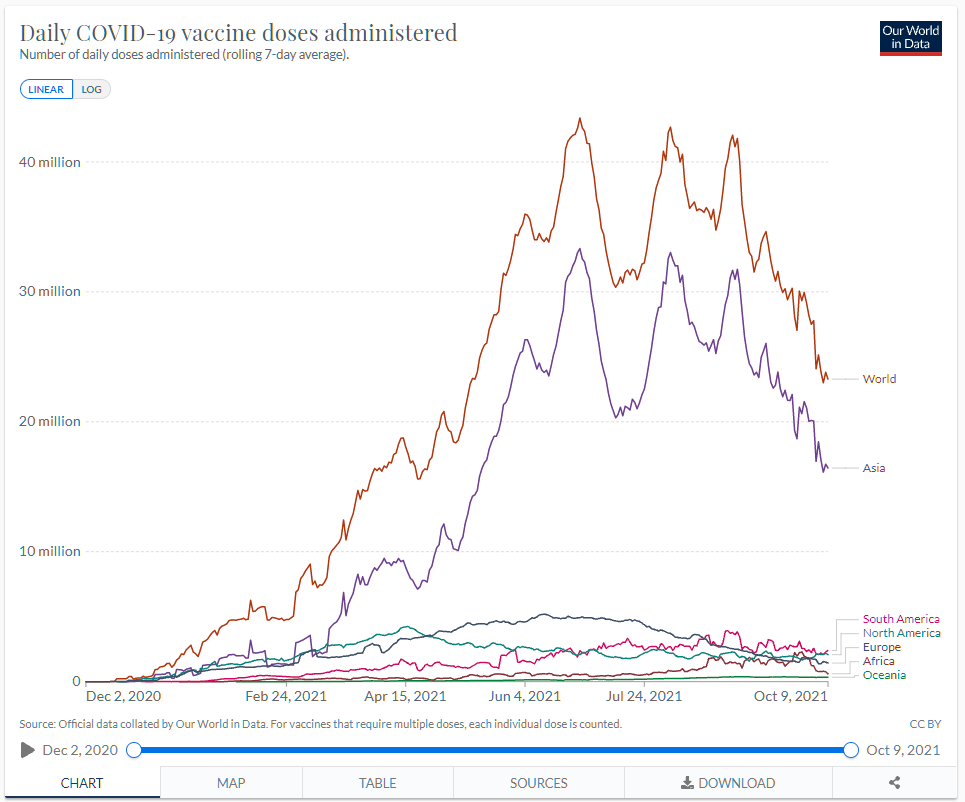 This second table shows where the doses are going, counting by dose numbers, rather than by percentage of population being dosed.  It doesn’t really explain anything, but it does show that “all the action” is in Asia – our “vaccine hesitancy” in the US doesn’t really impact on the dropping numbers at all.

We’re told Africa is desperate for vaccines.  But their vaccination rate is dropping.  Maybe that’s because they can’t afford to buy more? Australia and New Zealand are also desperate for more vaccines, and they can surely afford it.  Their rate has been level for six weeks.  In total, 35% of the world has been vaccinated.  That leaves a lot of potential for more vaccinating; why are daily numbers dropping rather than staying level or rising?

I’m not suggesting anything nefarious in this, just something really puzzling.  I really wish at least one single simple aspect of the virus and our response to it could be simple, transparent, logical, and understood.

But even the source data remains highly suspect and changing.  This article explains how the definition of “confirmed Covid case” continues to be surprisingly subjective.  Can’t we even agree on that?

This is a fascinating visualization of how Covid has waxed and waned over the months in the US.  But what does it mean?  What does it portend for the future?  I’d expressed surprise, on Thursday, at some “experts” saying we will not have any more major Covid outbreaks.  But, wait a day or two, and the truth will change, and now that rather bold statement is being met with questioning and uncertainty (as indeed it should).