It is usually possible to create a study to prove any point at all.  Here are two examples of studies that seem to be valid, but which are probably totally meaningless.

The first study, offered as part of the pro-vaccine propaganda; well, I’ll interrupt and repeat yet again that I’ve been vaccinated against Covid and am not anti-vax; but I am anti-lies and I am increasingly curious about what the “pro-vax” people are doing or hiding with their increasingly shrill demands for more and more vaccinating.  The people doing this don’t seem to realize that the more theatrically they exaggerate, and they more they demand, the more concern and skepticism and push-back they generate.

This article further considers the issue of why the public health authorities are taking such a biased approach to propagandizing the vaccines, while doing all they can to pretend that downsides don’t exist.  OSHA – an organization which is totally data-driven and which lives for “safety problems” that it can wade into the middle of and “fix” – has suspended the reporting requirements for any vaccine adverse reactions.

This is in astonishing contrast to the detailed and onerous requirements OSHA has for just about any and every other type of health issue or potential issue/risk.

Now, for the two studies and their spurious conclusions.  The first article tries a new approach.  Rather than trying to struggle to ignore the “vaccines are dangerous” inconvenient truth, the study suggests that Covid vaccines are so miraculous that they’re vaguely curing all sorts of other medical problems, too.  People vaccinated against Covid are less likely to die of other causes, according to the CDC study the article is writing about.

This is a great example of the danger of confusing correlation with causation, with the danger of plucking two unrelated statistics and then “cluster-analyzing” them or in some other way forcing the data into groupings that seems to prove some sort of point.

I don’t deny the CDC study found that people who were vaccinated were dying less of other illnesses.  But was this because of their vaccination, or because of something else?  Actually, the study itself answers these questions (but don’t let that interfere with the great headline).  The article says

Part of this is probably because people who get vaccinated tend to be healthier than people who don’t the researchers noted.

“The lower mortality risk after COVID-19 vaccination suggests substantial healthy vaccinee effects (i.e., vaccinated persons tend to be healthier than unvaccinated persons), which will be explored in future analyses,” they wrote.

In other words, the study should really conclude “healthy people are less likely to die than unhealthy people”, which is a conclusion that probably didn’t require the analysis of 11 million people at great cost.

This is rubbish research and it makes me wonder, again, why is the CDC funding such nonsensical research and why is it then drawing the wrong conclusions from it?  Why not fund some research into vaccine dangers, or ivermectin benefits, instead?

The second study – although proudly described as a “gold standard study” (a meaningless appellation that anyone can say about anything) is also built upon a massive obscured truth, to create a “finding” that is trivial in nature.

The study is designed to support the new in-vogue concept of mixing and matching vaccines.  The study says that if a person swaps from two shots of the Oxford/AstraZeneca vaccine, and instead has one AZ shot and the second shot either a Pfizer or Moderna shot, the effectiveness rises :

So that is a fairly clear cut set of numbers, isn’t it (even though there are massive gaps and weaknesses in what was tested and how).  Hence the conclusion, mixing and matching shots works.

But do you see what is missing?  There are three more lines of data that would be necessary to complete this evaluation.

Why doesn’t this “gold standard study” complete this analysis?  What are they hiding?

I have no idea what the result would be for one shot each of Pfizer and Moderna vaccinations in combination, but we know that two shots of Pfizer by itself, or two shots of Moderna by itself, are each something over 90% effective, sometimes claimed to be around 94% effective.

So, rather than telling us that mixing and matching vaccines is a good idea, what the study actually shows, but doesn’t tell us, is that if you substitute the second dose of either Pfizer or Moderna vaccines with a dose of AstraZeneca vaccine, the overall effectiveness plunges.  Two doses of Pfizer or Moderna mean 18 or 19 people out of 20 avoid infection.  Mixing the doses means 16 or 14 people avoid infection – that’s up to six times less protection.

And that is a conclusion which this “gold standard study” somehow omits to share with us all.  Why?

Romania continued to rush up the death rate table, displacing the US down one place in the process this week, and Mexico overtook Italy.

The case activity for last week table showed higher numbers for all listed countries.  At the top, Latvia had almost 1% of its entire country infected in a single week.

Things were much better in North America.  Canada dropped 27%, Mexico dropped 23%, and the US probably dropped about 22% (US statistics are now among the slowest in the world, so it is hard to be exact).

The world as a whole had a tiny 1% rise in cases.

Late last week, Republicans started calling for Fauci to resign or at least be held to account after the exposure of what seems to be “smoking gun proof” that he had lied about not paying for “gain of function virus research”.

I rather cringed at this development, because as soon as this becomes a partisan-driven issue or witch-hunt, science and truth and fairness get thrown out the window, and instead, our political representatives line obediently up in party lines, no matter what the underlying issues are.  This is particularly unwarranted in Fauci’s case, because he has been an active leader of the Covid public-policy debate for more time under a Republican administration than under the current Democrat administration, and lying is lying.

But somehow, it seems to be degenerating to a political divide, which leaves as little chance for common sense and fairness and justice as has become the case, on both sides of the aisle, with the drearily regular calls during both this and the past administration for impeachments galore on every last trivial issue.  Biden wore mismatched socks?  Clearly he must be senile, impeach him!  And so on, and of course, plenty of the same during Trump’s tenure too.

But possibly today, a new Fauci-revelation might knock his halo off, even if not causing him to be booted out of his job (which, remember is the highest paying job in the entire administration – higher than his boss, and higher than the President).  “Fauci tortures cute puppies“, while not the headline, is clearly the substance of the linked article.

They say that if you ever visit a sausage-making factory, you’ll never eat sausages again.  It is a bit like that with medical research, I suspect.  While I felt queasy and almost sick when skipping through the terrible article, I tried to seize, like a drowning man clutches at a straw, the rational thought that it is better such terrible things be done to dogs than to people.

But while Fauci can probably survive lying under oath to Senators as often as he wishes, torturing cute beagle puppies might be a bridge too far.

This article echoes our own commentaries for over a year now – anti-viral treatments are an essential part of a complete response to Covid.  Great.

But, as I read through the article, I became increasingly surprised to see it only referred to very expensive new treatments, not to any of the growing long list of low-cost known-to-be-safe existing/repurposed medications (this website has trial data on 28 different treatments, and a huge long list of trials of other products underway).  Why not?

Here’s an item we’ve been expecting for some time now.  Get ready for the definition of “fully vaccinated” to change.  This article is clearly a “trial balloon” preparing us for the policy change, that will make the “fully vaccinated” definition dependent on you continuing to get booster doses whenever and every time the government tells you to do so. 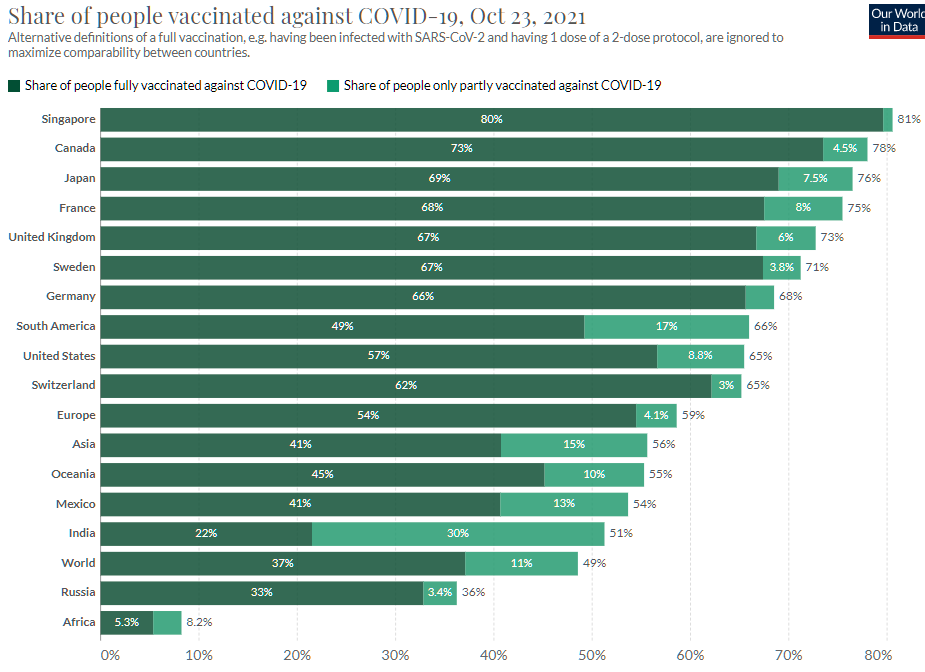 Vaccination numbers continue to rise so very slowly.  But we can take heart from the falling cases in the US. 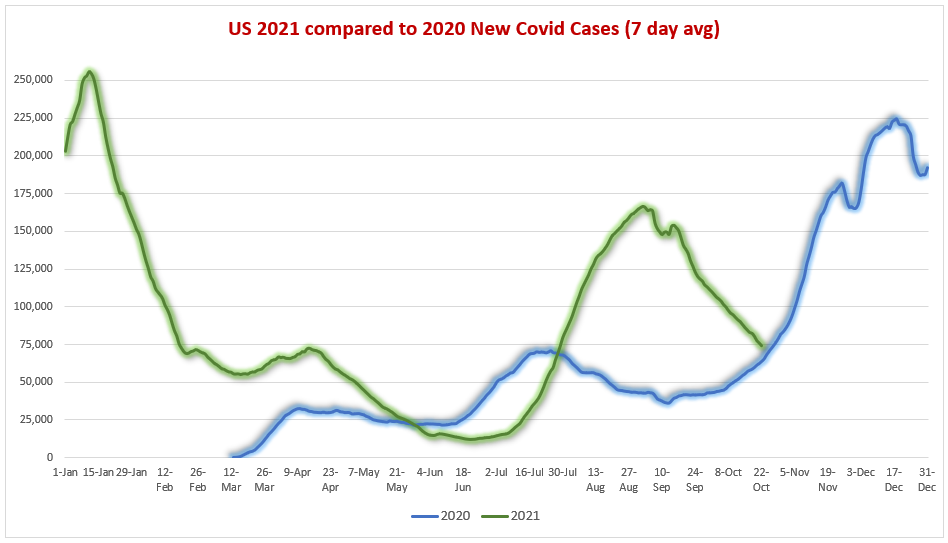 This chart is only through the end of Friday, but as you can see, our dropping numbers have almost reached the rising numbers in 2020.  Some time in the coming week they’ll cross through and we’ll then truly be able to feel good about progress.

Staying resolutely open is the US.  Notwithstanding the steady rise in new Covid cases in the UK and Europe, and the new more infectious Delta variant found there, the CDC says there’s nothing to worry about and no need to respond with any new travel restrictions.

We can’t reconcile this lackadaisical approach with the former rigid refusal to allow visitors from Europe. To summarize – when Europe’s numbers were way less than ours, we unnecessarily refused to allow them to visit.  Now that many countries in Europe have high Covid numbers, we’re allowing them to visit.

The things we’re getting short of become stranger and stranger.  The latest shortage is the color blue.