The former director of the CDC, Dr Tom Frieden, had this to say on Twitter earlier in the week

The coronavirus has mutated because so many people are getting and spreading it around the world. Vaccination reduces spread, saves lives, and makes it less likely that dangerous new variants will emerge.

This is almost literally and exactly a half-truth.  The first sentence is acceptably true.  The more cases of the virus, the more chances there are of more mutations occurring.

But, and here’s the rhetorical trick.  Get everyone agreeing with your first statement, then slip in a second statement that is less certain, but which also sounds credible.  Look at the three claims in the second sentence :

Vaccine reduces spread :  If only that were true.  But what country in the world can point to having conquered the virus as a result of vaccination? 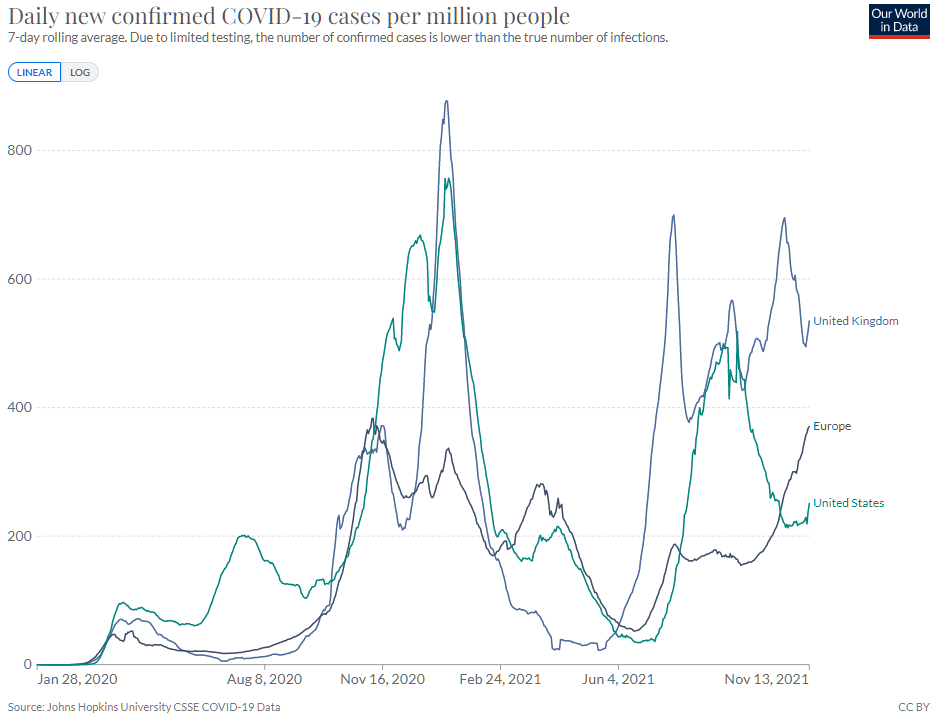 Certainly not the US.  Not the UK.  Not almost all of Europe.  We’re all wrestling with high rates that are going higher again.

Vaccination saves lives :  This is probably true, albeit not as drastically true as vaccine proponents would hope for.  See the fascinating statistic in the further material, below.

Vaccination makes it less likely that dangerous new variants will emerge :  This statement is wrong.  Weak vaccines – and the vaccines we have are weak by any sensible measure – place “evolutionary stress” on the virus, selectively biasing the virus replication so stronger virus variants are encouraged to survive while weaker variants are killed off.

Any doctor worth the paper his MD is printed on knows this.  How could Dr Frieden express something so at odds with prevailing medical wisdom?  This has been a problem for decades with antibiotics – the over-prescription of them, and people who don’t finish full courses of antibiotics, has seen the steady evolution of infections to become more and more resistant to antibiotics, and the appearance of super-germs that would otherwise never have appeared.

The same week that Dr Frieden is saying that weak vaccines make it less likely for new virus mutations to appear, we have an interesting new piece of research published.  Use of the largely ineffective (some people even suggest it is more harmful than helpful) drug, remdesivir, has now resulted in the virus evolving to become resistant to the drug.

Meanwhile, a new variation of the virus is making its presence felt in France.  This article tells us it might have come from Africa, and shares an “expert” opinion that says the failure of western countries to give free vaccines to Africa is creating the risk of new variants emerging from such places (and therefore threatening the west).

That is ridiculous for two reasons.  The first reason is, as discussed, lack of vaccination means lack of evolutionary pressure on the virus.  But, implied within the expert’s statement is that perhaps numbers in unvaccinated Africa are so high that, just because of runaway case numbers, Africa will see new virus forms emerging.

As I’ve said before, concern about Africa, while possibly well-intentioned, is totally misdirected.  From a virus point of view, there is nowhere better in the world to be than Africa. 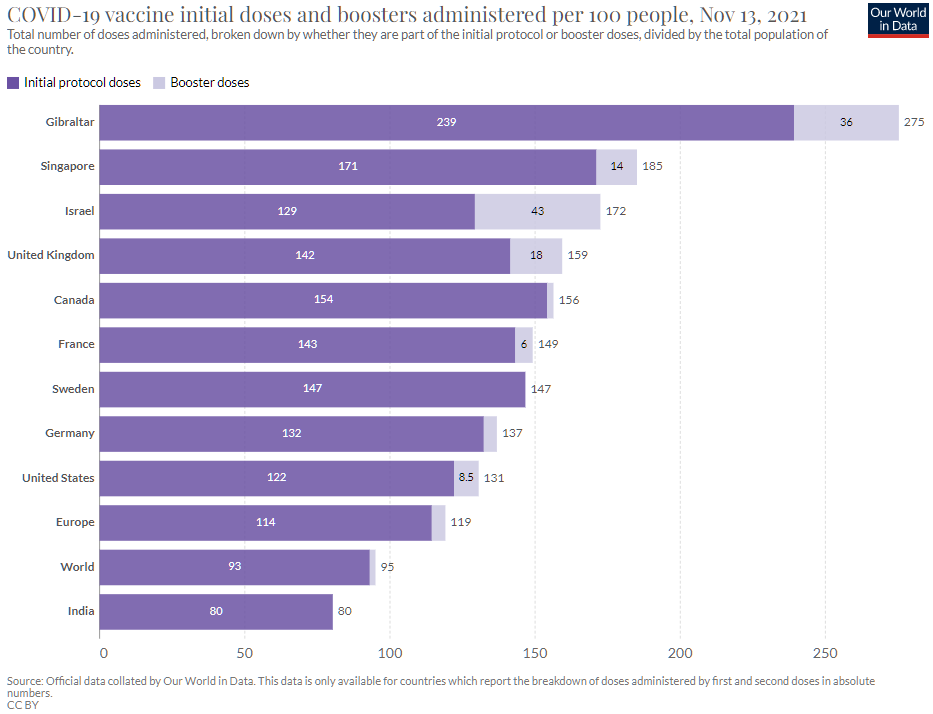 As you can see, Gibraltar has fully vaccinated more than its entire population (visitors too, I guess) and has already given third booster doses to 36% of its people, but look at the growth in cases it had over the last week.  Its growth rate of 10,601 new cases is almost identical to worst affected Slovenia in the table below (but isn’t shown because Gibraltar is too small to be considered in that table).  Now consider the claim above “vaccines reduce spread”.

As mentioned on Thursday, Sweden has risen one place in the major country list, but this is more a case of Argentina dropping than Sweden rising. 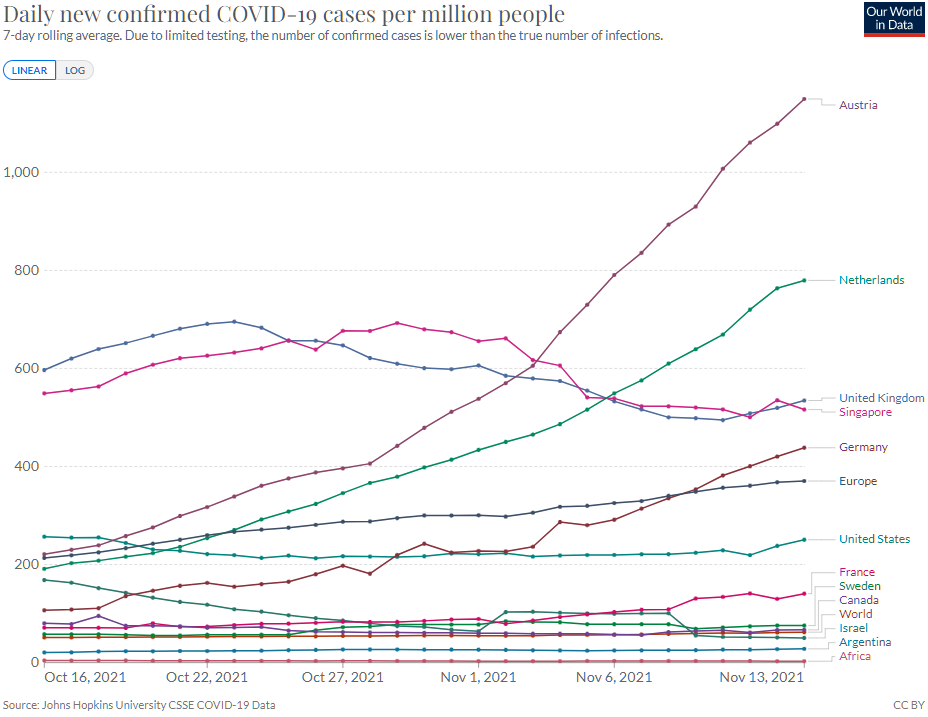 Both Sweden and Argentina have very low new case numbers compared to many other countries and regions, as you can see.  And note also the line at the very bottom of the chart – “tragically” under-vaccinated Africa.

No changes in the death rate table.

Europe continues to be the hot spot for new virus cases in the last week, as shown in the table below.  European countries with the highest growth rates over the week included Hungary with a 66% rise, Germany up another 49%, Portugal up 44%, and both Austria and Italy with 43% rises.  France was up 39%, and the UK has shifted back into rising case numbers again, too, with a mild 6% rise.

Good news for Romania, which is now moving back down from its enormous rise a couple of weeks ago.  It had a 40% drop.  The Baltic states are falling some, too, with Estonia down 37% and Latvia down 33%.  Sweden dropped 25% (only Spain had a lower rate of new cases for the week).  Europe as a whole had a rise of 12% in cases for the week.

In North America, Canada seems to have halted its gentle rise, and had a 5% drop.  Mexico dropped 1%, and I’m guessing the US rose by about 10%.  The world saw a 4% rise in cases.

This article has an intriguing headline “Vermont has the highest vaccination rate in the country. So why are cases surging?”.  It dutifully avoids criticizing the vaccine, of course, and suggests the Delta variant is to blame.

But that explanation is only partially true – perhaps it explains the increase in cases, but it doesn’t explain why VT’s cases are rising so much faster than most of the other states.  All states are equally affected by the Delta variant – all cases, throughout the country, are Delta these days.

So, the unanswered question is “Why is the most vaccinated state in the nation now the state with the 12th worst rate of new cases?”.  Perhaps we should ask Dr Frieden (the guy quoted at the top) how he reconciles that with his “wisdom”.

Here’s an interesting revision of objectives – the CDC no longer seeks to get us to a happy situation of having achieved herd immunity, its earlier goal.  The cited article quotes :

The prospects for meeting a clear herd-immunity target are “very complicated,” said Dr. Jefferson Jones, a medical officer on the CDC’s COVID-19 Epidemiology Task Force. “Thinking that we’ll be able to achieve some kind of threshold where there’ll be no more transmission of infections may not be possible,” Jones acknowledged last week to members of a panel that advises the CDC on vaccines. “We would discourage” thinking in terms of “a strict goal,” he said.

The thing that puzzles me is how no-one is willing to say “our present vaccines aren’t working, we need better vaccines”.  The truth of this unsaid statement seems beyond self-evident.  Why is no-one willing to state the obvious?  Instead we get mealy-mouthed phrases like “very complicated” and are discouraged from seeking a “strict goal”.

This isn’t just shifting the goal-posts.  It is burning them down.

Here’s another example of how the benefit of natural immunity is being deliberately played down.  This article opens with the statement “One fifth of people who have had Covid-19 … may not have adequate protection against future infections”.

Even if we ignore the weakness of “may not have” as a phrase, surely the key point is “81% of previously infected people do have adequate protection against future infection”.  That’s a great number, and much better than the vaccines are giving us.

And as for the “may not have”, the article strives to give the appearance of being even-handed and unbiased by acknowledging that the factor being measured isn’t the only contributing factor to immunity, but having made that disclaimer, then largely ignores it while focusing on the 19% of people who might have weaker immunity.  Most of all, nowhere is this compared to the much weaker protection from vaccines – especially because this study looked at people 9 months after their infection, and vaccines have all pretty much reduced to zero effectiveness by that time.

And, of course, after getting dangerously close to speaking against the official line of vaccination being wonderful, the article feels forced to conclude that the best thing to do is to get vaccinated, even if you’ve already been infected.

I’ve been keen to see longer term studies of the effect of vaccines.  Here now is a six-month follow-up study by Pfizer.  Assuming the data doesn’t include the falsified parts of the Pfizer study, we see that 22,062 people were given the vaccine and 22,021 were given a placebo.  During the six month study, 15 members of the vaccinated group died, and 14 members of the placebo (unvaccinated) group died.  These were deaths from all causes.  Covid deaths were deemed to be 2 among placebo members and 1 among vaccinated people.

If that is so, what does it tell us?  Almost nothing, which is probably why that data was tucked away in a nondescript appendix rather than becoming headline news all around the planet.  While clearly two is twice as large a number as one, what are the chances of that being random rather than exact?  If just one of the deaths flipped from one group to the other, we’d then be looking at 2 vaccinated dying and 1 unvaccinated dying – the exact opposite.  If just one more death was added, we might end up 2:2 or 3:1.

Europe is starting to close down ever so slightly.  In the Netherlands, nonessential stores, bars and restaurants now must close at 7pm.  Do the Dutch believe the virus is more infectious at night?

A closer to home conundrum for us is what will we do at Thanksgiving and Christmas?   According to this article, three out of five American families will be banning unvaccinated relatives from their gatherings.

Imagine inviting your sister and her family, and your parents, to Thanksgiving, and when they turn up, ready for a plate full of food, you demand to see their vaccination certificates before letting them in the house.

But, more than the awkwardness of this, what is the point?  Ask the Vermonters.  Ask the Gibraltans.  Vaccinated people get the virus too, and pass it on.

The problem with holding rational and scientific concerns about the actual value of the current vaccines is that one risks being lumped together with people of a crazier nature.  Such as, for example, these people – espousing what seems to be a way-beyond-crazy concept.

Here’s another article on people infecting animals.  In this case, people a safe distance away from the snow leopards in a children’s zoo in Nebraska are said to have infected the snow leopards.

I say “said to have” not because I don’t believe the snow leopards died of Covid.  But rather because of the vagueness of how the animals were infected.  Possibly from keepers rather than from visitors?