Do you remember, just a few months ago, the media was filled with articles talking about an “African apocalypse” at the hands of the virus.  As I pointed out back then, it was a nonsense claim.

Now, we’re seeing articles such as this one appear – taking the opposite side of the story, now expressing puzzlement at how Africa is being so lightly impacted by the virus.  This time, I agree with such articles, and wish there were answers that we could understand and act upon for the benefit of less fortunate regions such as our own.

Here’s an article in a surprising outlet.  Newsweek bravely moved a bit away from mainstream to publish an opinion article, “How Fauci fooled America“, although it couldn’t help itself and its editors felt the need to add some dissent in the article.

A group calling itself “Public Health and Medical Professionals for Transparency” filed an FOIA request with the FDA for material to do with Pfizer’s successful application for its vaccine to be fully approved, earlier this year.  Would you be surprised to learn that the FDA is slow-walking that request?

But let’s define “slow walking”.  The FDA says there are potentially 329,000 pages of material that might be relevant to the request.  It proposes to sort through them at a rate of 500 pages a month.  This will take 55 years to complete – and you can bet that all the “really good bits” won’t appear until the end of that period.  The FDA gives no indication that it will prioritize the key elements of the application and the most relevant and controversial parts.

Please appreciate that of those 329k pages of material, many of them are totally noncontroversial, and most of them have “dependencies” on the basis that if something somewhere is approved or not approved for release, the same flows through to other pages referring to the same thing.  The main approval request probably covered no more than 20 – 50 pages of material – everything else probably comprises printed out copies of articles cited, exhaustive details of every person in the trials and every observation/measurement of each test subject, and other such things.  A single decision could be made for each of those categories of materials, and certainly, the tens/hundreds of thousands of pages of non-controversial material could be quickly identified and released.

Instead, if the FDA gets its way, it will spend the next 50 years slowly releasing trivial nonsense each month, and only after it has exhausted all that content will it then turn to the more important documents.

Saying “yes, we’ll give you the material, over a period of 55 years” is effectively the same as refusing to provide the material.  Who among us expects to still be alive in 55 years?

The FDA employs 15,000 people, and has a $3.2 billion annual budget.  You’d think they could spare more than one person, part-time, to work through this in a more accelerated form.  Or are they forgetting they are a public service organization, designated to serve us?

It does make you wonder also what they’re seeking to protect and obscure, doesn’t it.

The requestor’s response to the FDA’s claim it can’t process the FOIA request faster than 55 years makes for an amusing riposte.  It points out that the FDA was able to thoroughly review, analyze, discuss, and approve the 329,000 pages in the Pfizer application in 108 days, and wonders why it would take any longer than that to sort through it and release it to the public.  They also gently point out that the FDA’s own governing regulations require them to immediately make available all documents underlying the licensure of a vaccine.  But the FDA has done the opposite, and has yet to release even a single page of material.

The requestor also wonders how it is that the Pfizer vaccine has now been fully approved (although Pfizer is still protected from lawsuits) and it (or other vaccines) are being made mandatory, both by the government and many private employers, but the reasoning and proof of safety, effectiveness, and all other relevant matters to do with the vaccine are being kept secret.

There’s quite a lot more as well.  Makes for compelling reading – starting on page 8 of this document.

Extremely vaccinated Gibraltar continues to suffer extraordinarily strong growth in new Covid cases, and went up a position in the minor country list.

There were no changes in the major country list.

Although Romania’s new case rate has dropped down, its death rate – which of course tracks a few weeks behind the case rate – is still terribly high, and it moved up another place in the death list.

The most affected countries by new cases last week list shows the usual sprinkling of changes.  Europe suffered another 15% rise in new cases over the last week.  The countries with the strongest rises were France (up 81%), Finland (66%), the Netherlands (56%) and Portugal (49%).  Germany rose 32%, and the UK rose a more modest 10%.

At the other end, Romania’s new cases continue to steeply fall, with a 42% drop in cases over the last week.  Latvia dropped 32% and Sweden went down another 28%.

There’s not much else today. 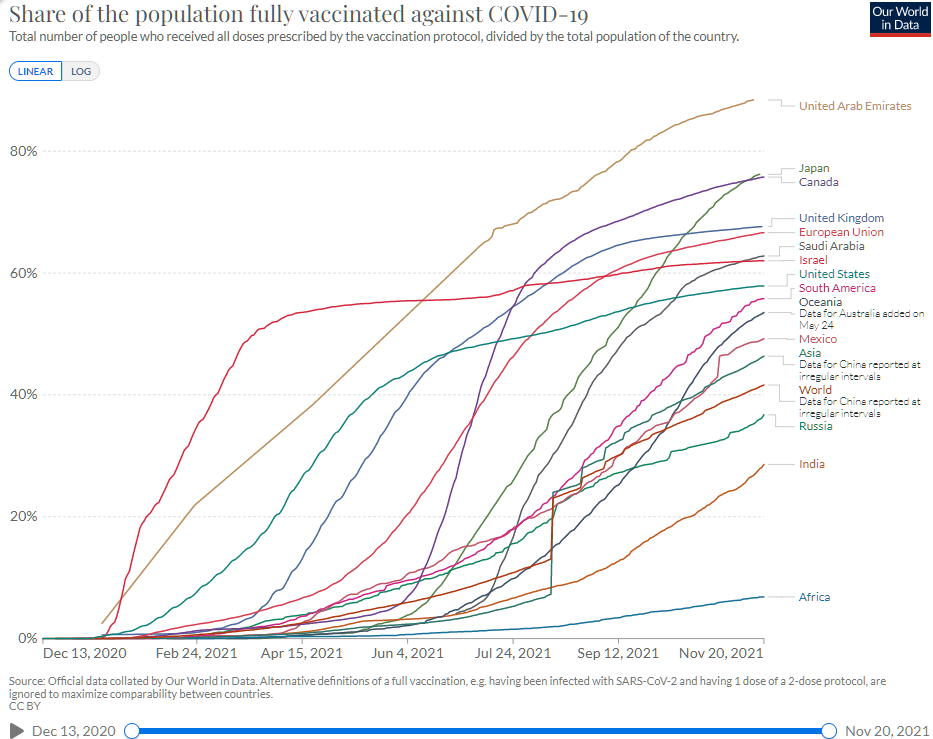 It is interesting to see how many countries have their vaccination rates slow down after “the low fruit” have responded.  It seems most countries have 50% of people eager to be vaccinated, and then fewer and fewer beyond that point.

Austria has now announced it will have a national lockdown starting on Monday, which will probably eliminate many of their lovely Christmas Markets.

The latest bizarre shortage?  Aluminum for license plates, at least in Montana.