I’m continuing to find interesting things about natural immunity acquired after having come down with a Covid infection.  As you’ll recall, I have wondered why there’s been so little interest in discussing this, or factoring it in to any of the “equations” and projections of disease spread and public health control issues such as restricting access to various things to only those people who have been vaccinated.

Why are we not giving equal “rights” to people with natural immunity that we’re giving to people who have been vaccinated?  This is a particularly relevant question for two reasons :

These two issues also make one wonder why exactly we’re lavishing so much hate on unvaccinated people.  One person said this week, addressing the unvaccinated on Twitter

But, I’m straying off-topic.  Back to the fundamental issue – we know that vaccine-based immunity is short-lived, and only really helps us stay out of hospital.  What about natural immunity?

The CDC claims there is not yet enough known about natural immunity.  If that sounds like a familiar claim, it is because that’s also what they say about ivermectin, even though there have been 129 studies involving 50,000 patients about ivermectin, so far.

It turns out that we do actually know a huge amount about naturally acquired immunity.  There are 123 research studies listed in this article.  Not all of them are specific to Covid-19 only, but most of the studies address issues that seem like they might apply to any type of natural immunity.  (I discuss one of these in the additional material, below.)

Let’s now look at something the CDC actually truly does not know.  It does not know of a single case of a person with immunity after a previous Covid infection subsequently infecting someone else with Covid.  While many people who have been vaccinated do this, there is not a single documented case of a person with natural immunity doing so.  This is not to say it is not happening, but it is curious that there are no examples of this, particularly because if there were, it would massively strengthen the orchestrated claims that natural immunity is either useless or of unknown value.

Why are the CDC and FDA and WHO and most other national/international public health organizations continuing to drone on incessantly about the need for vaccines, while ignoring the potential benefit of natural immunity?

The only possible answer seems to be the same answer as why the same organizations ignore the benefits of ivermectin treatment, but are now lining up to rush to praise and purchase the new “wonder drugs” from Merck and Pfizer.  That answer is “money”, and careful lobbying from big pharma to ensure that lower cost alternatives to their drugs and vaccines never get any mention or acknowledgement.

In case of ambiguity in my comments above, please do not think I’m advocating you should go get infected with Covid, in order to get the uncertain benefits of natural immunity!  That is totally the wrong thing to do.

One last introductory comment, on the growing social activism of doctors.  A BC (Canada) doctor has diagnosed one of his patients as suffering from “climate change”.  Would you put your life in the hands of that doctor?  I wonder what he prescribed as a cure?

In the major country list, it would seem Sweden rose one place, but it is probably better to say that Argentina dropped one place.  Sweden is experiencing a very low rate of new Covid cases, but Argentina has an even lower rate.  Turkey appeared at the bottom, nudging out Colombia.

There were no changes in the death rate list.

There were the usual swings and roundabouts in the countries most affected by new Covid cases last week.  We now have a “clean sweep” – all twelve most affected countries listed are in Europe, as are the next seven after these twelve.

Europe as a whole had further strong growth in new cases, another 15% rise.  Of the 3.3 million new cases in the world over the last week, 1.9 million of them were in Europe.

At the other end of the scale, Latvia and Romania both enjoyed a 35% reduction in new cases, Sweden’s case numbers continue to fall, by another 20% this week, and the UK had an 11% rise.

In North America, Canada had a 5% rise in cases, and Mexico had a slight 1% drop.  The US probably had about an 8% rise in cases – something the media are soft-pedaling at present and describing as “leveling out”.

The world as a whole saw a 7% rise in cases, almost entirely because of Europe and the US.

Fake news?  Or just sloppy analysis?  This article, “How Sweden swerved Covid disaster” is clearly written from the perspective of disagreeing with the social controls imposed in many other countries (but not in Sweden).  It opens with the claim that the death toll in Sweden is lower than in nations with draconian restrictions.

We’ll certainly agree that some other countries have higher deaths per million people than Sweden.  But, wouldn’t it be fairest to compare Sweden’s death rate to that of neighboring countries that are socially, demographically, and climatically very similar – other Scandinavian countries, in other words, with Norway being the most similar. 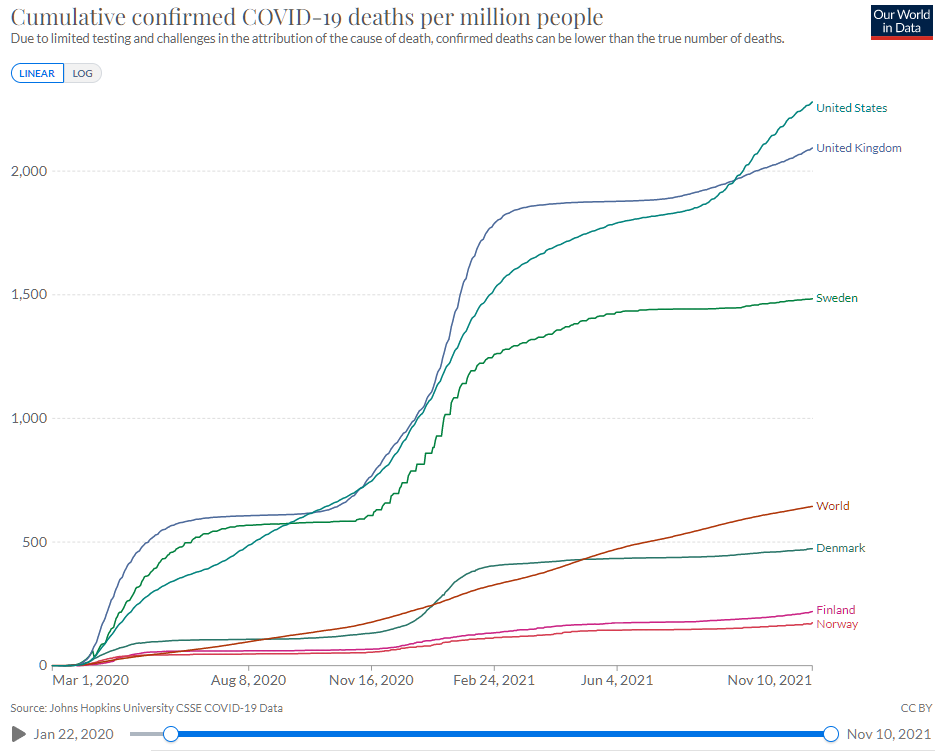 As you can see, Sweden’s death rate is 8.8 times higher than that of Norway, and massively higher than its other Scandinavian neighbors.  It is more than twice as high as the world in total.  Sure, there are other countries with much worse rates (the US and UK are shown), but to say that Sweden swerved Covid disaster seems to be unsupported by this chart.  The article writer should have put more effort into the article and less into the headline (okay – that’s a cheap shot, many times the article writer doesn’t get to choose the headline).

Talking of sloppy analysis, we wonder if the UK’s National Health Service CEO, Amanda Pritchard, simply got a bit “confused” when she claimed there are 14 times as many infected Covid patients in hospital now compared to the same time last year.

The actual number shows more like 1.4 times.  Maybe she just slipped a decimal place?  And how does this square with the UK’s 67% fully vaccinated count, another 6.5% with one shot, and 16% of the population having already received a third booster dose?

When will these people realize the solution to our problem is not to desperately demand more of the same (the same vaccines) but better vaccines and other strategies (ivermectin)?  Why is no-one willing to state the stark simple truth – our current vaccines are failing us.  We’ve 54 vaccines going through Phase 3 trials.  Surely some of these could be better?

Hospital administrators are barring their doctors from prescribing ivermectin to patients.  One such doctor is now surely sacrificing his career by choosing to sue his employing hospital to have the ban lifted.

That’s an omission that leaves one blinking and wondering why such a significant data point was not shared.  Clearly, the study had an agenda to follow.

Here’s another step forward on what seems an unstoppable path towards mandatory booster shots. 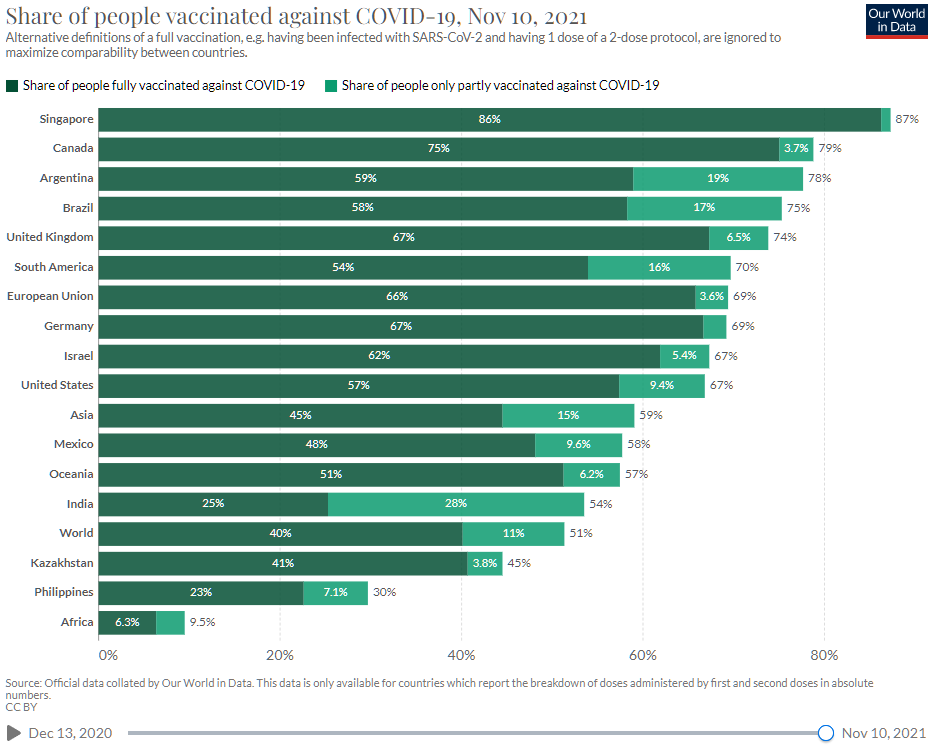 Countries continue to slowly move forward with vaccinations.  But look at Canada – one of the best countries, with 75% vaccinated, and yet it also reported a weekly growth in new Covid cases.

This article has a fascinating set of tables of excess deaths for assorted countries.  Excess deaths are considered to be “more people dying than normally happens in past years and for unexplained reasons” – the clear inference being that the significant rise in excess deaths might be another way of showing uncounted Covid cases.  Russia in particular has a huge disparity between total deaths and Covid deaths, which is the point of the article.

Here’s a helpful sheet about what is involved to come into the US via a land entry port (or a ferry).  Good news. It seems that if you are vaccinated, you don’t need to show a recent Covid test, and as best I can tell, the same applies for entry into Canada too.

This is a light-hearted spoof of Public Health Canada’s virus handling, but based on reality.  Some of it sounds uncomfortably familiar, doesn’t it.