This article claims that the approval and use of remdesivir is the greatest scandal of the pandemic.  That’s a powerful claim to make, because there are so many other contenders for that title, but it is a powerful article to support the claim.

Certainly, remdesivir’s puzzling approval should be placed on the shortlist of scandals, along with the unavoidable twin to this – not only was remdesivir approved on the basis of thin, ambiguous, and controversial evidence (and subsequent growing links of bad and even fatal side effects), but the continued refusal to approve ivermectin – well, that for me is probably going to remain my number one pick.

Talking about which, here’s another scandal contender.  A woman who was dying of Covid, and unsuccessfully petitioned a court to compel the hospital she was in to give her ivermectin, has now died.

Even if what the linked article says is correct (and it is most definitely not correct) – ie, there has been a “lack of study proving (ivermectin’s) effectiveness” and the FDA saying “it hasn’t proved effective in pre-clinical trials” let’s consider what is also universally accepted by everyone, even the FDA, about ivermectin.  It is safe.  It is as safe as taking an aspirin.  Billions of doses have been dispensed, with almost no problems, everywhere in the world.  It is low cost and low impact – a few dollars for a dose, and simply swallow the pill.  If it weren’t for the doctors and pharmacists and their monopolistic approach to dispensing medicines in this country, it would be an over-the-counter drug along with pain relievers, antacids, and so on.

So, with a woman dying, and nothing else working, what person with a shred of humanity would refuse her a literally dying request for ivermectin.  What is the worst that can happen?  The best that might happen is she gets better, even perhaps only from the “placebo effect” of being given the medicine she was desperate for.  But, the worst?  She is dying, there is no “worst case scenario” that applies.

The refusal to give this woman – and all the others like her – ivermectin has to be one of the greatest scandals of the pandemic.

But, wait, let’s look at just one more scandal.  A vaccine scandal – and which part of the vaccine story should we focus on.  How about this – a Georgetown medical professor/immunologist predicting that by the spring, there’ll be a fully vaccine resistant Covid variant.

Let’s make a list of all the other vaccine resistant viruses out there.  None.  This article, for example, considers the issue and says it is very hard to find viruses that might have developed vaccine resistance.  The article was written before Covid…..

How much more harm will we inflict on the world before we finally admit that the “vaccines” being mandated for everyone to take are not vaccines and don’t work as promised, and not only have downsides in terms of our health, but further downsides in terms of accelerating the development of new super-strains of Covid?

Surely that too is a contender for the greatest scandal of the pandemic.

The most vaxxed country in the world, with everyone vaccinated and 41% of the population having already received a booster dose, ie Gibraltar, suffered an extraordinary 13,421 new cases per million people in the last week.  Only the Cayman Islands (83% fully vaccinated, no data on booster dose numbers) had a higher rate of new cases last week.  As a result, Gibraltar moved up the minor country list, as did Lithuania and Estonia. 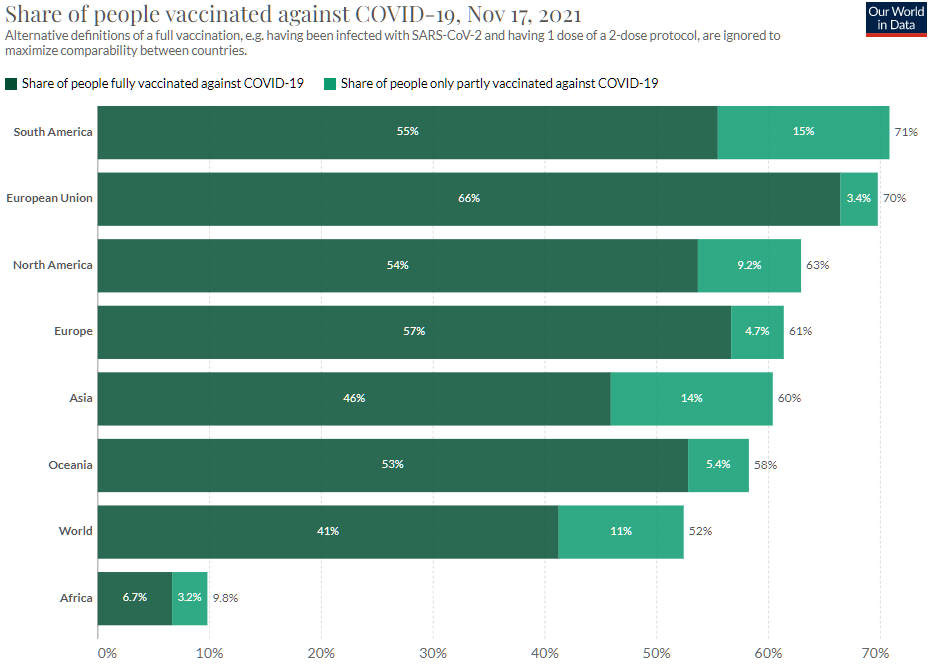 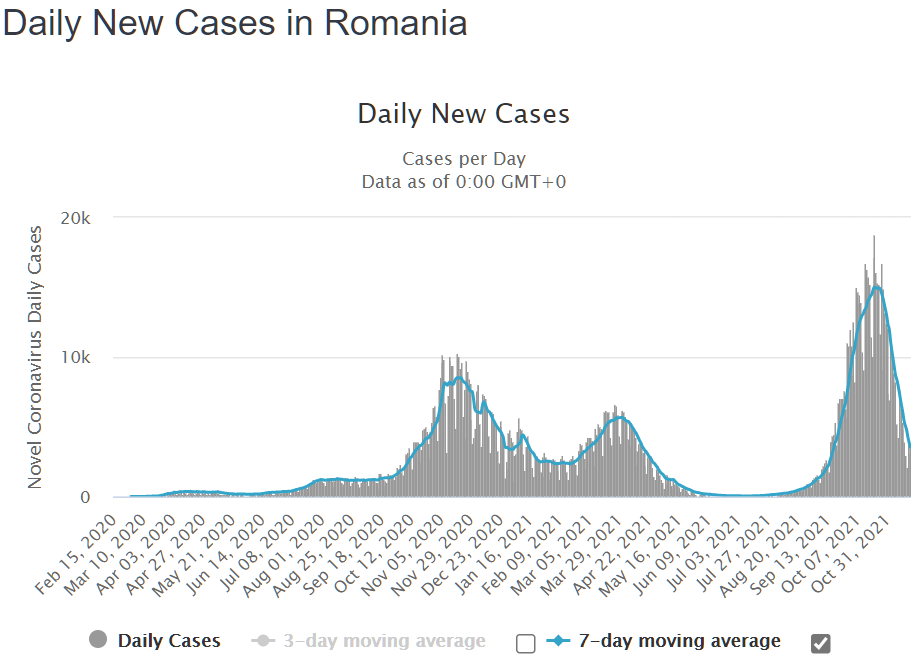 It is worth commenting, again, about the really strange way that virus numbers suddenly skyrocket, then just as suddenly, fall again.  Intuitively you’d expect a much slower/gentler rate of change.  This is one of the enormous mysteries of the virus which deserves and demands some attention and understanding (as I’ve said before).

Contrast the case rate numbers in Europe with those here in the US, were we had a 13% rise in cases, and 1,854 new cases per million people over the last week.  A shame about the rising case numbers again, but with case rates five times lower than Austria, perhaps we can see our glass as half full.  Canada had a gentle 4% drop (to a mere 441 cases/million) and Mexico enjoyed a 20% drop down to 124 cases per million (Mexico’s vaccination rate is much lower than Canada’s or the US’s).

The world as a whole had a 7% rise in cases.  60% of all cases in the entire world came from Europe in the last week.

With the escalating arguments about vaccines, and compulsory booster shots, some of the other points of contention haven’t been so prominent.  But here’s an article reporting on a global study (more like “a study of studies”) that says mask-wearing cuts down on Covid spread by 53%.

I wonder what Dr Fauci currently thinks about mask-wearing – 18 months ago he was laughing at the idea of people wearing masks.  Last I heard, I think he’s gone from that position to advocating double-masks.

Don’t get the wrong idea.  I’m in favor of mask wearing, and accept the 53% statistic, although that number is massively variable, depending on the type of mask worn, and how effectively it covers the mouth and nose.  I don’t think many of us need a study to be told that wearing it on your chin is not at all effective!

It is surprising there hasn’t been more focus on which masks are good and which are bad.  Many of the expensive “re-usable” designer fashion-statement masks are not nearly as effective as a simple surgical mask, and, after a dozen wears and washes, must surely be approaching zero effectiveness.

Why is it that we insist on mask wearing in certain circumstances, but have no definition of what is an acceptable or unacceptable standard of mask?

It has been a long slow process, but gradually there is growing official recognition of a Covid treatment – perhaps helped by the fact it doesn’t “threaten” the sales of either vaccines or early treatment drugs.  The drug is dexamethasone, and it is being viewed as suitable for people with severe cases of Covid, giving them a 56% reduction in needing ICU treatment and a similar reduction in the risk of dying. 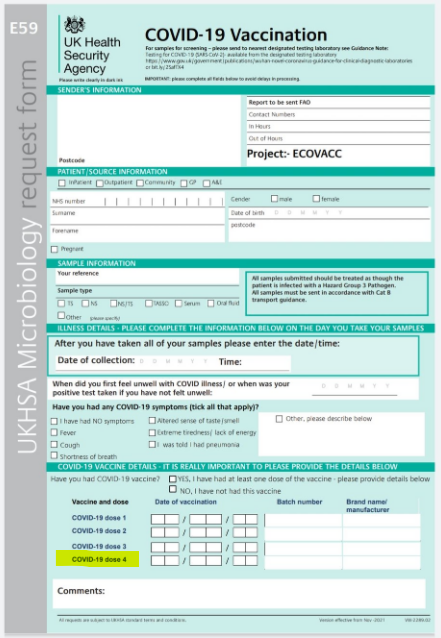 At the same time that the “buzz” is centering on the concept of making a booster dose compulsory – something that most of us have probably long anticipated and expected – there’s another issue approaching, too.  The timing of a fourth shot.

Over the last few months, we’ve been told that a third booster shot will shoot our antibody levels sky-high and give us super-immunity.  But, when it comes to the issue of how long that super-immunity might last, the initial positive advocacy is turning more ambivalent – look at this article, for example, which poses the question and then delays answering it as long as possible before giving a very unclear answer.

One thing is tellingly clear.  The UK is printing forms with space to record a fourth shot on them, already.  Will a fourth shot be mandatory, too?

The short-lived nature of the vaccine totally changes the calculus about the risks attendant with each shot.  It is one thing to take a once-only vaccine with a measurable risk of death or other negative outcomes, but if you have to start taking that vaccine every six months, that’s like playing Russian Roulette not just once, but repeatedly.

I voluntarily had an initial vaccination (of the J&J vaccine).  I crossed my fingers during the 15 minutes immediately afterwards, and then kept thinking positive thoughts for the still-risky 42 days that followed.  Doing it once, voluntarily, in return for a major benefit, made sense.  But I feel a lot more awkward at being forced to keep doing so, indefinitely into the future.

As you can see, the US is experiencing steadily rising cases again, and has been for the last 15 days.  Wednesday and Thursday were both days with over 100,000 new cases being reported, the first time we returned to six-figure numbers of daily new cases since early October. 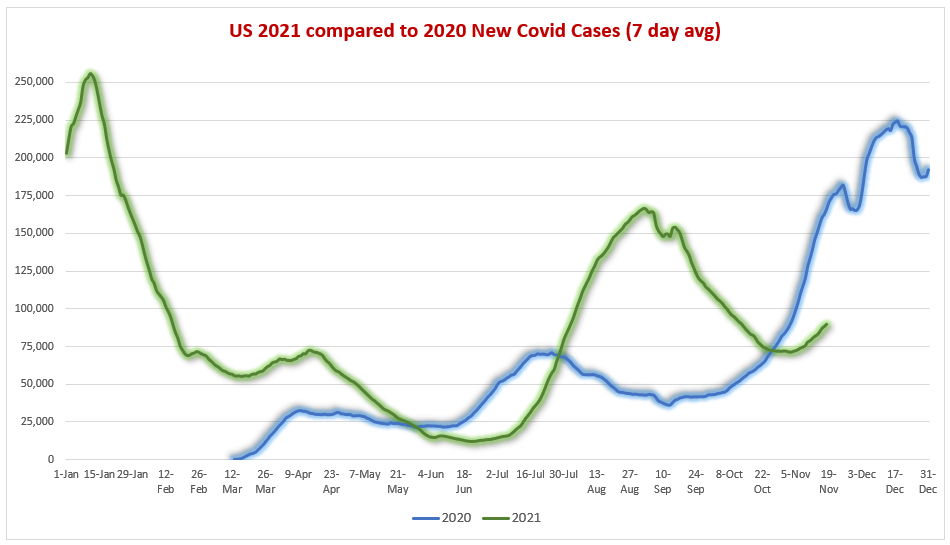 While this new rise might be short-lived, it is hard not to look at what happened last year as we moved into late fall and winter, leading to the all-time peak in January this year, before case numbers suddenly plunged, just as mysteriously as happened in the last few weeks in Romania.  The US fall in January was before vaccinations would have any measurable effect, in case you were guessing it was vaccine-related.

Will this year’s cycles and numbers now do the same as last year?

Munich has decided it will cancel its Christmas Markets again this year.  Others are following suit, while some are changing their layouts, with fewer stalls and spacing between them.  That is an unnecessary measure, “solving” the wrong problem.  The problem isn’t the stalls, but the crowds of people jostling their way through the markets.  Limit the attendees, not the stalls, and with fewer stalls, the lines of people eagerly trying to buy something – food, drink, or gifts – will be longer.

With Thanksgiving just around the corner, of great interest to people planning to fly somewhere for Thanksgiving is what is happening with the TSA and its screeners.  Up to 40% of all screeners have not yet been vaccinated, and so in theory will be laid off on Monday next week (22 November).  Will this actually happen – and if it does, what will be the impact on airport security lines during the Thanksgiving crowds of travelers?

I can’t guess as to the second question, but my guess about the first question is there’ll suddenly be an announced extension of the deadline.

The headline claims a 20.1% rise in beef prices in the last twelve months, which it blames not only on shortages but also on increased demand.

Two comments.  The first is that, where I am in the Seattle area, it sure seems like a lot more than a 20% rise.  I’d guessed 50% – or more, but perhaps there’s a trick in the statistic – October last year had already seen a massive increase in beef prices for 2020.  So, 20% more in the last year, and maybe 30% or more – much more – in the six months prior to that.  Many cuts are now over $20/lb, and even high-fat ground beef is at a price I not-too-long ago paid for steak.  (But, for me, that isn’t the worst thing in the world – it encourages me to eat more lamb; thank you Costco for the excellent Australian and sometimes NZ boneless legs of lamb you sell.)

The second comment is that while there might be shortages, those price increases aren’t flowing smoothly through the system to the farmers.  This article shows that in 2020, when most of the price rising happened, prices to farmers for cattle actually dropped during the year, and during the panic months of June and July were at the lowest for a three year period.

I don’t know how much extra the supermarkets might be taking, but I gather very little.  It is the meat packing plants that are having it both ways – at times paying farmers less than before, while selling the boxed beef they’ve created at higher rates than ever before to the supermarkets.

Another strange thing to be in short supply?  Garage doors.

I’ve written a couple of times about zoo animals coming down with, and sometimes even dying of Covid.  I’d wondered why there wasn’t a vaccine for animals.  Turns out – there is, but only for zoo animals, not for your family pet.